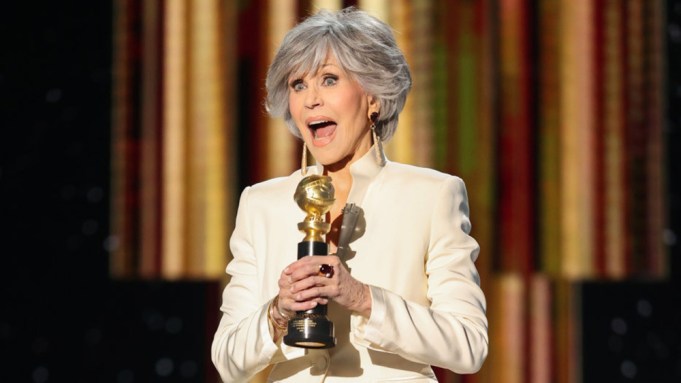 Jane Fonda accepted her Cecil B. DeMille award for lifetime achievement at the Golden Globe awards by calling on Hollywood to work harder to increase diversity.

“Stories, they really can change people. But there’s a story we’ve been afraid to see and hear about ourselves in this industry, a story about which voices we respect and elevate and which we tune out, a story about who is offered a seat at the table and who is kept out of the rooms where decisions are made,” she said.

“So let’s all of us, including all the groups that decide who gets hired and what gets made and who wins awards, let’s all of us make an effort to expand that tent so that everyone rises and everyone’s story has a chance to be seen and heard.

“I mean, doing this simply means acknowledging what’s true, being in step with the emerging diversity that’s happening because of all those who marched and fought in the past and those who have picked up the baton today. After all, art has always been not just in step with history, but has led the way. So let’s be leaders; okay?”

Fonda listed many of the works that inspired her in the past year “Nomadland,” “Minari,” “Judas and the Black Messiah,” “Small Axe”, “U.S. vs. Billie Holliday,” “Ma Rainey,” “One Night in Miami” and others “have deepened my empathy for what being Black has meant,” she said, continuing to mention “Ramy,” “I May Destroy You,” “All In” and “A Life on Our Planet.”

Kerry Washington, Laverne Cox and Brie Larson were among those who paid tribute to Fonda in the intro to her speech.

The honor, which has gone to entertainers including Oprah Winfrey, Jodie Foster, Meryl Streep, and Tom Hanks, pays tribute to Fonda’s work in film and television. From classics like “Coming Home,” “Klute” and “9 to 5” to her current Netflix series “Grace & Frankie,” Fonda’s career onscreen has spanned more than half a century.

Along the way, she has never hesitated to speak out about justice, peace, equal rights and the climate crisis — drawing controversy early in her career for her anti-war stance and being nicknamed “Hanoi Jane.”

She was stirred when she first heard she had been selected for the award, “Actually, I shed a few tears,” she told Variety. “I was totally taken aback. And I was very moved.”

Fonda also recognized the work of the HFPA in contributing to film restoration, including reviving the “lost” documentary “F.T.A.” about her work protesting the Vietnam War. The film, which stands for “Free the Army” or “Fuck the Army,” documents the time she spent performing at military bases with Donald Sutherland.