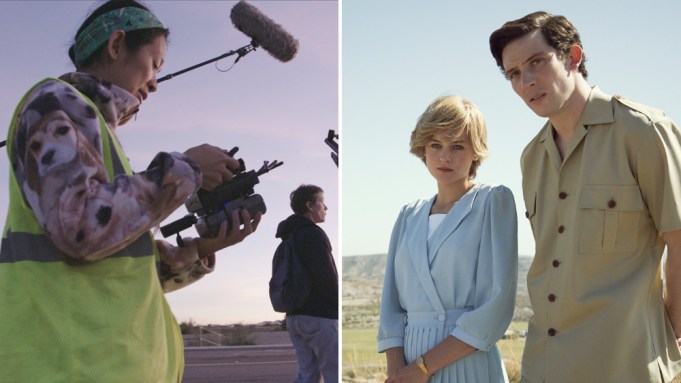 “The Crown” won best TV drama and “Schitt’s Creek” nabbed best TV comedy at the 78th Golden Globe Awards on Sunday, providing moments of triumph during a broadcast that unspooled in the shadow of a global pandemic and amid a controversy that is roiling the cliquish organization behind the annual show.

“Nomadland,” a low-budget drama about a woman traveling around the American West, scored a best motion picture drama prize, while making history for its director Chloé Zhao. She became only the second woman to win a best director prize, joining Barbra Streisand, who was recognized for directing “Yentl” in 1983.

In a sign of the shifting power dynamics in the media business, this year’s telecast was dominated by streaming services, with Netflix picking up a leading 10 prizes. Amazon’s “Borat Subsequent Moviefilm” nabbed the best motion picture comedy or musical prize, while “The Queen’s Gambit,” which became a must-binge sensation during the darkest days of COVID-19, was named best TV movie or miniseries. Both “The Crown” and “The Queen’s Gambit” were produced by Netflix. And while “Nomadland” was produced by Searchlight, an indie film studio, it is currently streaming on Hulu as a concession to a public health crisis that has shuttered many cinemas.

The Hollywood Foreign Press Association, which hands out the prizes, is under fire for not having any Black members in the 87-person organization. The nonprofit is also under scrutiny for allowing its voters to attend lavish junkets and for paying its members handsomely for serving on committees. Heading into the show, industry guilds, advocacy groups and stars like Ellen Pompeo slammed the group, potentially setting the stage for an explosive broadcast. Those fireworks didn’t really materialize. Most winners stuck to thanking agents and family members, but a few used their time to criticize the HFPA.

“Schitt’s Creek” co-creator Daniel Levy pushed the group to broaden its membership. “I hope that this time next year this ceremony reflects the true breadth and diversity of the film and television being made today because there is so much more to be celebrated,” he said.

Despite the scandal, several projects with a strong Civil Rights message and numerous Black performers were recognized over the course of the three-hour show. Chadwick Boseman became only the second posthumous best actor in a drama winner for his work as a jazz musician in “Ma Rainey’s Black Bottom.” The “Black Panther” star died in August of colon cancer. He was 43.

Andra Day was named best actress in a drama for playing Billie Holiday in “The United States vs. Billie Holiday,” one of several performers recognized for portraying historical figures.

John Boyega nabbed the prize for best supporting actor in a series, miniseries or television film for his work as Leroy Logan, a barrier-breaking police officer in “Small Axe.”

“The Crown,” a lavish Netflix historical drama about Queen Elizabeth II and her family, picked up four prizes and “The Queen’s Gambit” snagged two prizes. Among other streaming service victors, Apple, which launched its own Netflix challenger in 2019, earned a best actor in a TV comedy honor for “Ted Lasso’s” Jason Sudeikis, while Disney Plus nabbed two awards for “Soul,” a Pixar movie that originally was intended to debut in theaters. It earned honors for best score and animated feature.

In addition to “The Crown’s” best drama prize, stars Josh O’Connor and Emma Corrin were recognized for dramatizing the fraying relationship between Prince Charles and Princess Diana, while Gillian Anderson won a supporting actress statue for channeling Margaret Thatcher. Corin paid tribute to the late princess while accepting her prize. “You have taught me compassion and empathy beyond any measure that I can ever imagine,” she said.

“Schitt’s Creek” star Catherine O’Hara won best actress in a TV comedy for her portrayal of a daffy matriarch grappling with the loss of her fortune. O’Hara thanked the series’ creators Eugene and Daniel Levy for letting her “wear a hundred wigs and speak like an alien.”

There were no shortage of surprise victors in the winners’ circle. Among the upsets, Rosamund Pike was named best actress in a TV movie or comedy for her work as an amoral hustler in “I Care a Lot,” while Jodie Foster was a best supporting actress winner for “The Mauritanian.” Both earned their prizes over the likes of Maria Bakalova (“Borat Subsequent Moviefilm”) and Glenn Close (“Hillbilly Elegy”), with Foster appearing genuinely stunned by her win. The evening’s biggest snub was likely David Fincher’s “Mank,” a black-and-white ode to old Hollywood that scored a leading six nominations, but failed to convert a single one into a win.

The Globes took place with most winners accepting their prizes virtually, the new status quo for awards shows in the age of coronavirus. Instead of the typical boozy atmosphere that characterizes past shows, this broadcast often felt like a Zoom family reunion, albeit one comprised of A-listers, some of whom, like a hoodie-wearing Sudeikis, left their tuxedos and gowns in the closet. The red carpet may have been lacking, but the show gave viewers a more informal look at the winners, who beamed in from hotel suites and living rooms. Best actor in a TV movie winner Mark Ruffalo (“I Know This Much Is True”) and best foreign language film winner Lee Isaac Chung (“Minari”) received huge hugs from their children while accepting their statues, while David Fincher took a shot as he lost a best screenplay prize to “The Trial of Chicago 7’s” Aaron Sorkin. The remote nature of these speeches also meant that the broadcast suffered from several technical glitches and scratchy audio.

Hosts Tina Fey and Amy Poehler took a bicoastal approach to emceeing, with Fey hosting from the Rainbow Room in New York City while Poehler held court from Los Angeles at the Beverly Hilton. The two wasted no time skewering the HFPA in their opening for the group’s shoddy diversity record and ethical lapses.

“The Hollywood Foreign Press association is made up of around 90 international — no black — journalists who attend movie junkets each year in search of a better life,” Fey said. “We say around 90 because a couple of them might be ghosts and it’s rumored that the German member is just a sausage that somebody drew a little face on.” She also called them “European weirdos” while both hosts urged the organization to include Black members in their ranks.

The group’s leaders did emerge to awkwardly pledge to do better without providing any details about what reforms would be implemented.

“We recognize we have our own work to do,” HFPA vice president Helen Hoehne said. “Just like in film and television, Black representation is vital. We must have Black journalists in our organization.” While the group’s president Ali Sar vaguely offered that the  HFPA looks “…forward to a more inclusive future.”

The Globes aren’t an accurate gauge for how the Academy Awards will unfold. Last year, the Globes awarded top honors to “1917” and “Once Upon a Time in Hollywood” only to see them fall short of capturing best picture at the Oscars. Both films lost to “Parasite.”

Two icons went into Sunday’s ceremony knowing they’d receive a statue. “All in the Family” and “Good Times” creator Norman Lear received the Carol Burnett Award for career achievement in television, while “Klute” star Jane Fonda was honored with the Cecil B. DeMille Award in recognition of her extensive film work.

“We are a community of storytellers, aren’t we? And in turbulent, crisis-torn times like these, storytelling has always been essential,” Fonda said in a speech that seemed to articulate the mission of a medium that has been challenged and imperiled by the pandemic. “Stories can change our hearts and our minds. They can help us see each other in a new light — to have empathy.”

In an apparent nod to the diversity crisis shaking the Globes, Fonda went on to argue that Hollywood needs to do more to provide opportunities to women and people of color.

“Let’s all of us make an effort to expand that tent, so that everyone rises and everyone’s story has a chance to be seen and heard,” she said.