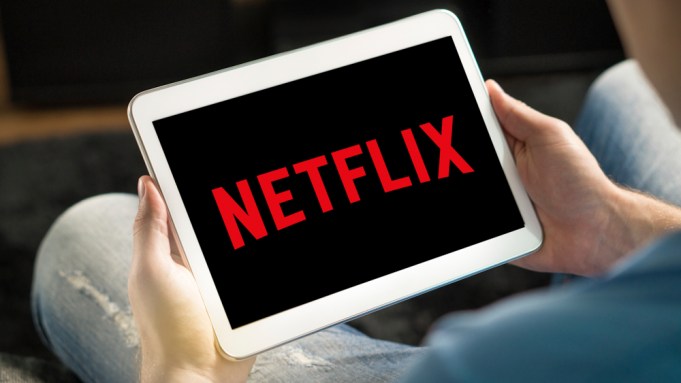 Bullish investors pushed up Netflix stock to close Wednesday at an all-time high of $586.34 per share, up 16.9% for the day. Shares hit a new intraday record of $593.29 per share. Netflix’s market capitalization currently is $259 billion, as the stock surge pushed it higher than the market caps of Comcast and Verizon.

The rally came after Netflix reported adding 8.51 million paid streaming subscribers in Q4, about 2.5 million more than expected, to stand at 203.7 million worldwide at the end of the year. For the full year, the streaming giant added a record high 36.6 million streaming customers — even in the face of aggressively ramping competition.

Analysts lauded Netflix’s solid Q4 results and upbeat forecast amid the intensifying streaming wars. UBS Securities’ Eric Sheridan on Wednesday upgraded the stock from “neutral” to “buy,” and raised his 12-month price target from $540 to $650 per share on higher estimates “to reflect higher compounding growth.”

UBS recently “framed [Netflix] as a [long-term] winner as more consumer habits shift globally toward a handful of streaming media platforms and feel this recent earnings report will act as a further validation point,” Sheridan wrote. “While the shares may remain volatile due to quarterly sub performance, we now see a more compelling positive risk/reward than in mid-2020.”

Also upgrading Netflix shares was Wells Fargo Securities’ Steven Cahall, who upped his rating from “equal weight” to “overweight” and raised his stock target from $510 to $700 per share. “We’ve gone from a historical bear on Netflix to a card-carrying bull,” Cahall wrote.

Other analysts who have long been bearish on Netflix gave the company props for overdelivering in the fourth quarter and setting the stage for positive free cash flow.

“We have long believed that Netflix faced a difficult path to positive free cash flow, but its performance in 2020 has convinced us that we were wrong,” Wedbush Securities’ Michael Pachter wrote in a note, although the analyst maintains an “underperform” rating, based on Netflix’s valuation.

Pachter added, “Rather than continuing to borrow to finance its content needs, it is clear that Netflix has reached a point where it can maintain a healthy balance sheet and finance its operations from operating cash flow.”

Netflix reported negative free cash flow (FCF) for Q4 of -$284 million but noted that FCF for the full year was positive — $1.9 billion in 2020 vs. -$3.3 billion in 2019. “We believe we are very close to being sustainably FCF positive,” the company said in its Q4 shareholder letter.

For the full year 2021, Netflix is projecting free cash flow to be around break-even (versus previous guidance of -$1 billion). As such, Netflix said, “we believe we no longer have a need to raise external financing for our day-to-day operations” and said it will “explore” returning cash to shareholders through stock buybacks. Netflix reported $15.8 billion in long-term debt and $8.2 billion in cash and equivalents as of the end of 2020. The company said it plans to repay bonds coming due from cash on hand, “as we are currently well above our minimum cash needs.”

As Pachter observed, “The company managed its production spending in a very difficult environment, and while conserving cash and generating $1.9 billion of positive free cash flow in 2020, Netflix still managed to add a record number of new subscribers.”