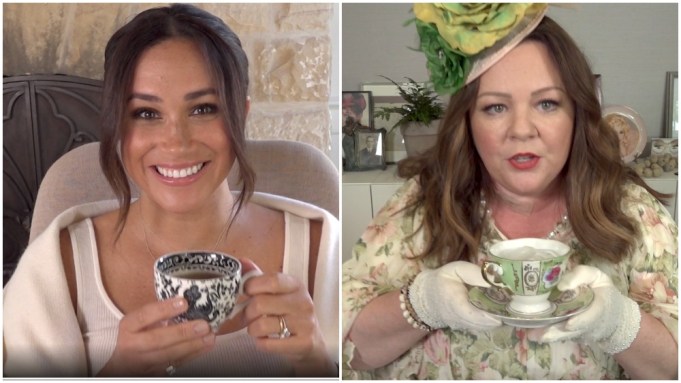 Meghan Markle celebrated her 40th birthday on Wednesday by releasing a comedy video with Melissa McCarthy.

The video, titled “40×40,” consists of Markle and McCarthy on a video call discussing the duchess’ new philanthropic endeavor, which involves Markle asking 40 friends to give 40 minutes of their time to mentor women “mobilizing back into the workforce.” Tens of millions of women around the world have lost their jobs due to COVID, she points out, and urges everyone to dedicate 40 minutes to “some kind of act of service” in order to create a “ripple effect.”

As Markle tries to get this message across to McCarthy, the comedian interrupts frequently, first by getting changed into a dress and hat befitting of a royal wedding guest, then asking whether Markle is planning a “Suits” reunion and, finally, grabbing a pair of sunglasses and asking if the duchess wants to have a “yacht party,” to which Markle shakes her head.

The end of the video includes outtakes of McCarthy asking about having tea with Markle’s rescue chickens, who were memorably featured during her interview with Oprah Winfrey in May, and even Prince Harry, who pops up outside the duchess’ Montecito mansion window with some juggling balls. “What?” Markle asks as she spots her husband out of the corner of her eye before descending into giggles.

The video marks a rare on-screen appearance for the duchess of late. Markle gave birth to her second child, Lilibet Diana, in June and is currently on parental leave alongside Prince Harry for at least five months.