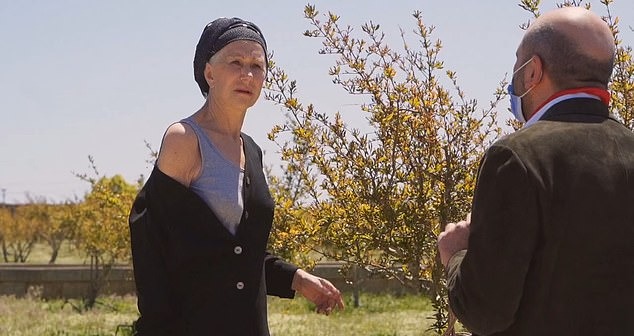 In the video, Mirren is doing some gardening on a roadside in Southern Italy, when Zalone, playing a Spaniard, stops to ask for directions and notices a mark on her arm where she’s had her jab.

He then breaks into song as a passionate love affair follows that sees the pair dance through a lemon orchard, enjoy a spot of Bocce Ball, do some knitting and play cards together.

The song’s chorus refers to Mirren’s character’s jabbed status with the refrain: “I love to dance with you, O’Vacinada; face to face with this immunized old girl.”

Zalone also sings: “I don’t care if your ankles are a bit swollen…Your movements are so suave and sensual it seems your femur is original.”

Mirren, 75, has been widely praised in Italy both for promoting the country’s vaccination campaign and also for being willing to poke fun at herself while doing so, though there have been some social media grumblings opining that “La Vacinada” can be considered offensive to women in ways the actress may not have been aware of when it was shot.

These grumblings included comments that Zalone’s references to Mirren’s aging body could be construed as body shaming.

Mirren on Thursday responded issuing a statement to Italian news agency ANSA in which she said: “I am enthusiastic about the fact that my friend and admired colleague Checco Zalone asked me to appear with him in a video to promote the vaccination campaign.”

“Working with a man of such elegance and genius is really an honor and I am very happy that there has been such a strong response to our work.”

Zalone’s comedies systematically break Italian box office records. His most recent hit is immigration-themed comedy “Tolo Tolo,” which in 2020 pulled in $62 million domestically. His 2016 film “Quo Vado,” took in $70 million, which is Italy’s all-time highest gross for a local pic.

After a slow start, Italy’s vaccination program is now gaining traction and has hit its target of 500,000 COVID-19 vaccinations per day, with roughly 22% of the population having now received at least one shot.