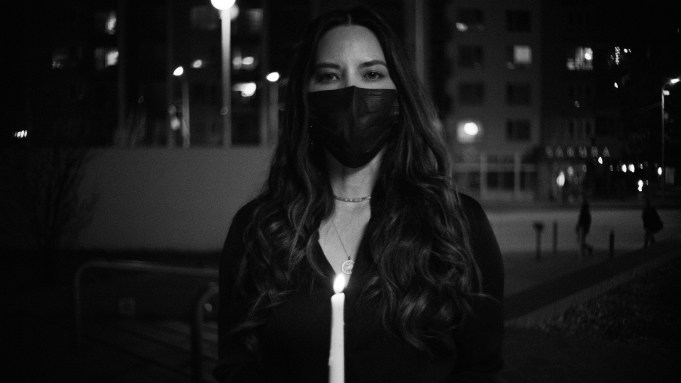 In the wake of escalating violence against Asians in the U.S., crowdfunding site GoFundMe collaborated with independent film director Bao Nguyen to produce a short film that shines a light on the historical issue of anti-Asian racism in the country — with the participation of Olivia Munn, Ken Jeong, Lisa Ling, and other entertainment and cultural leaders.

Filmed in L.A. earlier this month, “#StopAsianHate​ Together” shows a candlelight vigil with speakers recounting the history of violence against the Asian American and Pacific Islander community, including the horrific killing of six women of Asian descent in the Atlanta area last month. (Watch the 3-minute film above or at this link on GoFundMe’s YouTube channel.)

The film directs viewers to GoFundMe.org’s AAPI Community Fund, which has raised more than $5.5 million from more than 46,000 donors since it launched March 4. That includes a $500,000 contribution from YouTube. Along with the film’s release, GoFundMe.org, the company’s charitable arm, is increasing the goal of the AAPI Community Fund to $8 million. The next round of organizations that will be receiving grants include the Asian American Federation, AAPI Women Lead, and Empowering Pacific Islander Communities.

“Asian Americans have felt unseen and unheard for a long time but we’ve been standing up against racism and speaking out for our communities for decades — it’s just no one was listening,” Nguyen said in a statement. The Vietnamese American filmmaker’s credits include “Be Water,” a documentary about Bruce Lee that premiered at the 2020 Sundance Film Festival.

Nguyen added, “This film is a forceful yet poignant reminder that these incidents are part of our American identity and we must act together to stop these incidents from happening in our communities.”

Ken Jeong, who has donated to and promoted GoFundMe.org’s AAPI Community Fund, said the main takeaway he hopes people have from the film is simply: Stop Asian hate. “Honestly, it’s crucial for all of us to participate and to be loud and clear in our messaging,” he said in a statement. “Speaking out and lending our voices to educate are actions we can all take to make a difference.”

Olivia Munn said in a statement, “I want people to know that anti-Asian racism is not a recent phenomena. It’s been happening to our community for a long time. But we are united in our efforts to protect each other and put an end to the hate.”

Lisa Ling, who hosts “This Is Life with Lisa Ling” on CNN, added, “As someone who has a bit of a platform, it’s imperative for me to speak out against acts of hate in the Asian American community.”

GoFundMe chief marketing officer Musa Tariq said he wanted to get the company involved after “several of my friends expressed concerns over the rising violence toward the Asian community.” Those included fashion designer Phillip Lim, who reached out to Bao Nguyen about a video project featuring leading voices in the community.

“One of the things the team wanted to get across was, this wasn’t new — there’s a history here,” said Tariq, a former Airbnb exec who joined GoFundMe this past January.

One goal of backing the “#StopAsianHate​ Together” project was, of course, to burnish GoFundMe’s brand, Tariq acknowledged. But more broadly, the initiative is to call attention to how the crowdfunding site can be a force for positive change, he said.

GoFundMe takes a portion of donations for payment-processing fees but does not otherwise collect any other funds by default. In November 2017, GoFundMe switched from charging a platform fee to voluntary tip-based business model. On donation pages, the suggested “tip” amount to give to GoFundMe is set at 12.5% but a contributor can set that to zero (or any other percentage).