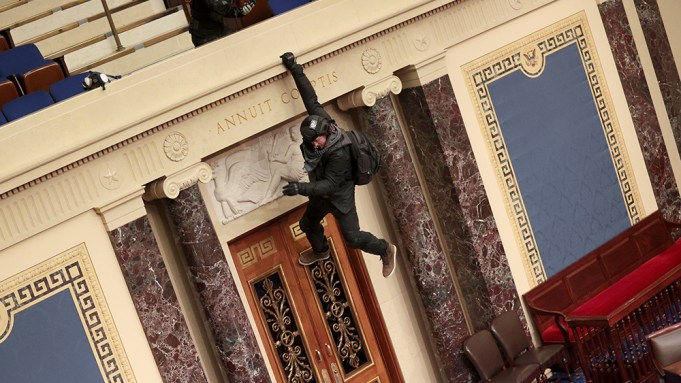 UPDATED: Facebook, in an unusual action, removed President Trump’s video post to D.C. rioters telling them to “go home” — while he also fanned the conspiracy flames that the U.S. election was fraudulent. A Facebook executive said the company deleted Trump’s video over the risk that it would increase the risk of violence.

YouTube also pulled down the video from Trump’s channel, citing a violation of its ban on election misinformation.

“This is an emergency situation and we are taking appropriate emergency measures, including removing President Trump’s video,” Facebook VP of integrity Guy Rosen wrote in a tweet. “We removed it because on balance we believe it contributes to rather than diminishes the risk of ongoing violence.”

In the pre-recorded video, Trump said in part, “I know your pain, I know you’re hurt. We had an election that was stolen from us. It was a landslide election and everyone knows it, especially the other side. But you have to go home now… This was a fraudulent election, but we can’t play into the hands of these people. We have to have peace. So go home. We love you, you’re very special.”

A YouTube rep confirmed the platform removed the video posted this afternoon to Trump’s channel because it “violated our policies regarding content that alleges widespread fraud or errors changed the outcome of the 2020 U.S. Election.” However, YouTube will allow copies of the video if it is uploaded by other users “with additional context and sufficient educational, documentary, scientific or artistic (EDSA) value,” the rep added. The Google-owned video site adopted the policy last month.

Trump (or a member of his staff) posted the video to social media Wednesday at about 4:17 p.m. ET after a mob of pro-Trump rioters took over the U.S. Capitol and halted the official certification of electoral votes in Congress.

In the case of Facebook, it appears to be the first time the social network has deleted one of Trump’s own posts. The social network has pulled down posts shared by the Trump campaign, including a video clip in June of a Trump interview on Fox News Channel in which he claimed children are “virtually immune” to COVID-19 and a campaign video with images and video footage of George Floyd after a copyright complaint.

In a subsequent blog post, Facebook execs said the company is “monitoring activity on our platform in real time.” The company said it’s identifying and removing posts including content that: expresses “praise and support of the storming of the U.S. Capitol”; calls for others to bring weapons to “locations across the U.S.”; calls for protests, even peaceful ones, if they violate the curfew established by Washington, D.C., officials; and posts that are aimed at restaging violence.

In addition, Facebook said the company is updating its label across its platforms on posts “that attempt to delegitimize the election results.” The new text reads: “Joe Biden has been elected President with results that were certified by all 50 states. The US has laws, procedures, and established institutions to ensure the peaceful transfer of power after an election.”