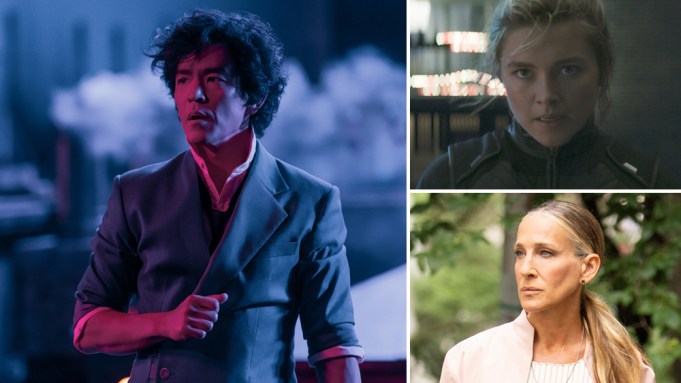 “Cowboy Bebop’s” foray into live-action territory may have ended faster than it started, but that didn’t stop fans from flocking to Twitter to chat about the show’s debut on Netflix — or its swift cancellation. The series topped Variety‘s Trending TV chart for the week of Dec. 7 to Dec. 13 with more than 28,000 engagements by fans who were shocked by the streaming service’s decision to axe the ambitious show less than a month after it debuted.

Variety Trending TV Charts, powered by Twitter and sponsored by DIRECTV, reveal the most buzzworthy programs each week by measuring engagements — a combination of audience interactions that include tweets, retweets, likes and hashtags.

“Cowboy Bebop” star John Cho also seemingly got into the conversation with an appropriate gif from “Friends,” assuring fans he was “okay,” despite the untimely end of the futuristic bounty-hunter series, which is based on the anime classic of the same name.

That wasn’t the only comic-inspired series making waves on Twitter last week. A new, water cooler-worthy episode of Disney Plus’ “Hawkeye” took the internet by storm when “Black Widow’s” Yelena (Florence Pugh) showed up and tried to kill Jeremy Renner’s Clint Barton. Fans had been expecting the character’s appearance after the arc was teed up in a post-credits moment in “Black Widow,” when Julia Louis-Dreyfus’ Valentina Allegra de Fontaine showed up at Black Widow’s grave and pointed Yelena in that direction.

Add in a top-notch car chase scene and online buzz from the stars who got into the retweeting game, and people were eating it up.

In the live-event game, there were countless moments for Twitter to talk about from the Miss Universe competition in Israel. Things took a political turn following a Palestinian-led international campaign calling for a boycott of the ceremony, but there was plenty of love for winner Harnaaz Sandhu, who represented India. Viewers had strong reactions after returning host Steve Harvey asked her to meow like a cat onstage (yes, you read that right). The fact that she played along, despite her visible shock, inevitably earned her extra points with the audience, at any rate.

That wasn’t the only reason Harvey was at the center of Twitterverse this week though, as the host essentially solidified a drinking game out of his now-notorious gaff. The TV host, who previously announced the wrong winner at the 2015 show, almost had a repeat of that disastrous moment when he revealed the 2021 winner.

Facing the two finalists, who hailed from Paraguay and India, he said, “Congratulations Portugal.” But, given past experience, the host quickly retracted and explained it wasn’t his fault. “They wrote Portugal on the damn sign, trying to play me,” he said. “They’re trying to get me again. But I’m not going for it this year.” Harvey then congratulated Paraguay’s contestant Nadia Ferreira on being the official 2021 runner-up.

And just like that Harvey saved himself for now, but there was no saving a certain character on “And Just Like That.” (Spoilers ahead!)

The “Sex and the City” reboot also topped the 10 most-talked about shows on Twitter this week when it dropped its first two episodes on HBO Max. While the series return was bound to spark conversations, the controversial killing of Mr. Big (Chris Noth) on a Peloton bike at the end of Episode 1 had fans in tears. Peloton stock dropped, Noth teamed with Ryan Reynolds for an alternative-ending ad with the exercise equipment company, and boss Michael Patrick King stood by his decision to “destroy Carrie’s world” and kick off the revival on a more depressing note.

We've come a long way. ❤️❤️ Our first two episode of #AndJustLikeThat are out now on @HBOMax! pic.twitter.com/97HbXGnfnI

Former “SATC” star Kim Cattrall also helped ignite the conversation on Twitter, although in a more discreet way. Following her decision not to reprise her role as Samantha Jones, the actor “liked” various comments from fans who sang her praises or commented on Samantha’s absence from the show — which was written as her moving to London for work after Carrie (Sarah Jessica Parker) fired her as her publicist.

Last but not least, the Jeremy Strong discourse continued online as HBO aired its much-anticipated third-season finale of “Succession.” Discussion surrounding the actor and his reported method acting choices was at an all-time high as a result of a New Yorker profile that dropped on Dec. 5, but the conversation continued as actors like Jessica Chastain and Anne Hathaway defended their former co-star. Scribe Aaron Sorkin also got into it all by asking Chastain to post a letter on his behalf that defended Strong and his portrayal in the article, prompting many in the industry to question whether this was an A-lister attempt at canceling celebrity profiles altogether.

Ive known Jeremy Strong for 20yrs & worked with him on 2 films. Hes a lovely person. Very inspiring & passionate about his work. The profile that came out on him was incredibly one sided. Don’t believe everything you read folks. Snark sells but maybe its time we move beyond it.

Aaron Sorkin doesn’t have social media so asked me to post this letter on his behalf xx pic.twitter.com/3Ol1KGoJKM

Whatever Strong’s methods are, viewers were into his vibes in the “Succession” finale, which bolstered the conversation even further and prompted many users to begin a Jeremy Strong Emmy campaign. Now that’s a win both Strong and his character, Kendall Roy, could probably get behind.