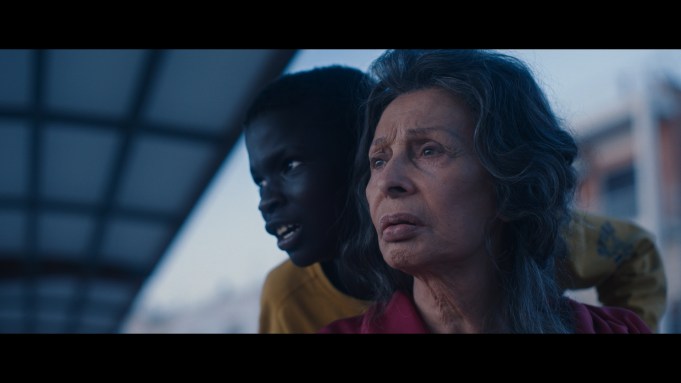 Long after rising to stratospheric stardom during the glory days of cinema Italiano and Hollywood’s golden era, Sophia Loren stepped out of semiretirement to play Madame Rosa, a former prostitute and Holocaust survivor, in “The Life Ahead.” The film is directed by her son Edoardo Ponti, who will be honored at the Filming Italy Los Angeles festival this week.

It’s yet another signature role and a stunning comeback for the Italian icon, now 86, who after working with the crème de la crème of award-winning co-stars, this time shines opposite Ibrahima Gueye, a 12-year-old Senegalese boy, in his first real acting role. He plays Momo, an orphaned street kid. It is through his eyes that this powerful story of love and friendship between an unlikely pair is told.

For her triumphant performance, Loren drew from the “toughness and fragility” of her own mother, Romilda Villani. Villani’s “fighting spirit,” Loren recounts, inspired her throughout her legendary seven-decade career, during which Loren always strived to play strong women.

Loren says her mother possessed “incredible strength and raised two children, without a husband, at the tail end of World War II, with resourcefulness, love and determination.” She describes “The Life Ahead’s” Madame Rosa in similar tones. “[She is] everything a woman is, and everything I’ve always wanted to bring to the screen,” Loren says.

Over the years, she’s brought all that and more. In the Neapolitan suburb of Pozzuoli, Loren’s big break came in “The Gold of Naples” (1954), playing a pizza purveyor who turns heads. After moving to Los Angeles in the late 1950s, she rose to fame with a panoply of pictures including many Hollywood classics. But she continued to work in Italy as well. She returned home for “Two Women” (1960), playing a young widow who tries to protect her daughter from the atrocities of World War II. Loren later took another strong female lead in “Yesterday, Today and Tomorrow” (1963), which won the Best Foreign Language Film Academy Award in 1965.

Throughout her prolific career, Loren has reinvented and redefined our understanding of beauty, managing to avoid being pigeonholed as a sex symbol and taking time out to raise a family. “I think that I have done so much in my career from 15 years old,” she says of taking a break from acting to spend time with her two children and husband.

One of those children, of course, is her director on “The Life Ahead.” She says that because she fully trusts Ponti, they do their best work together.

“When my son offered the role to me, I jumped at the opportunity,” says Loren. “With Edoardo, I am completely myself on the screen because, of course, being my son, he knows me really well. So I could really give him the best I can, always.” This is her third film with Ponti; they worked together on the drama “Between Strangers” (2002) and on the short “Human Voice” (2014).

“Edoardo is so careful with all the details in a film — he puts in so much heart,” Loren says.

In one scene in “The Life Ahead,” Madame Rosa shares time on a rooftop with Momo who discovers she has a memory disorder.  With rain pouring directly on Loren’s face, Ponti asked his mother to not move or blink throughout the scene, which she admits was nearly impossible. “I was not there. I was somewhere, but not there. … I was not able even to think,” Loren says. “But if my son asks me to do something, what do you think I did? I did not blink. And it was not easy.” Even with so many memorable cinematic moments behind her, Loren found this a scene to remember. ”

Ponti observes: “My mother approaches every role, every adventure, with the desire to explore sides of her that maybe she hasn’t yet explored. She’s not afraid of falling and getting back up, and she allows me to expose those parts because there is such a level of trust and confidence between us.”

Of her own process, Loren says, “For every character, my preparation is the same. I dig deep within myself and try to bring out the truth that is universal.” Madame Rosa, who is a beautiful and powerful Neapolitan woman like the actor playing her, is the role Loren has been preparing for all her life.

Check out the Netflix FYC Film Awards website for a more in-depth look at “The Life Ahead.”