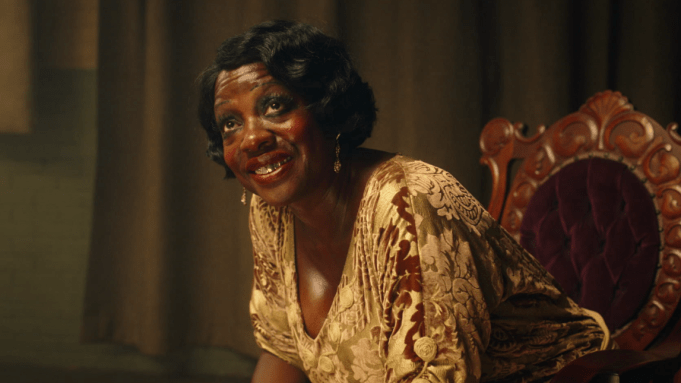 It rained and rained the night before shooting the establishing tent show scene of “Ma Rainey’s Black Bottom.” Humidity in the rural outskirts of Pittsburgh — standing in for backwoods Georgia — was at 100%.

The summer heat amplified the smell of damp hay in the canvas tabernacle. Stacked bales served as makeshift stadium seating, just as they had on the chitlin circuit circa 1927.

Two other productions filming in town had hired away the region’s professional background actors so the hundred-odd extras who filled the tent were mostly first-timers. Each was outfitted with a unique 1920’s-era ensemble with a backstory to go with it, personally bestowed by the film’s fabled costume designer, Ann Roth.

The energy under the tent was palpably electric. The extras had signed up for more than a shoot; they were there to see the show: Viola Davis as the legendary “Mother of the Blues,” Ma Rainey.

That’s a pretty good indication that Davis nailed the character. “This is a woman who knew she was the show from the moment she walked into the room,” Davis says of Rainey. Awards voters have noticed: Davis has already won the SAG Award and is nominated for an Academy Award for the role.

Davis’ four Academy Award noms are more than any other Black actress has received. She won her first Academy Award, for best supporting actress, in another August Wilson adaptation, “Fences,” starring “Ma Rainey” producer Denzel Washington. If Davis wins the statuette for her role in “Ma Rainey,” she will be only the second African American woman in history to win the best actress category.

The nomination has special resonance for its acknowledgement of Davis’ fully textured portrayal of Ma Rainey in all her complexity — a Black, bisexual woman who is never for a moment submissive, undignified or pitiable.

A dark-skinned woman from the Deep South, Rainey was not considered beautiful.  Nor did her fame give Rainey a “golden ticket to the school of worth,” Davis says. “She fought for herself. From the moment you see her, she is fighting for her worth.”

Davis confides that Ma Rainey is probably the furthest away from her own personality of any character she has ever played. The role forced her to tap into a part of herself she usually hides from.

“It just catapulted me out of that. Everything I had in me — my sexuality, my confidence — everything was in vast display,” Davis says. “It was liberating.”

The external part of her transformation was helped along by the costume and hair and makeup teams. Padding expanded her figure. Ma’s clothes, gold teeth and horsehair wig all “helped me believe I wasn’t Viola anymore, that I could disappear,” Davis says. Something about playing Ma was an affirmation for Viola. When she swished her hips and told the band that it’s what she says that goes, Davis left her shy self far behind.

To be authentic, Davis had to reconstruct the character of Rainey. Accounts and records of Rainey’s life are scant, so Davis also relied on what she knew about Black women — and about life.

“You know that life is messy, right?” Davis says.

Creating the character’s exterior presented unique challenges for the costume, hair and makeup teams. Roth, legendary for her preparation, was up for all of them.

“Ann does not make one choice that is not connected to her understanding of the character, the moment, the period, the stakes,” says director George C. Wolfe. Roth, whose career spans more than six decades, has already won the 2021 Costume Designer’s Guild Award for excellence in period film for her “Ma Rainey” designs and is nominated for the Academy Award.

Roth discovered that Rainey wore horsehair wigs in her act. So, hair designer Mia Neal ordered a horsetail from England. It arrived beautifully wrapped — and stiffened with manure and lice eggs. Neal spent 60 hours sewing one hair at a time into a wig for Rainey’s onstage scenes, then boiled it twice and baked the coarse hair on rollers. To her surprise, it softened and kept its curl as durably as today’s synthetic wigs.

Neal and Jamika Wilson, Academy Award nominees for their hair work on “Ma Rainey’s Black Bottom,” are the first Black women ever nominated in the category. At the 2021 MUAHS Guild Awards on April 3, Neal also won best period hairstyling and/or character hairstyling in a feature film honors for “Ma Rainey.”

Like Davis, makeup designer Sergio Lopez-Rivera didn’t have a lot of documentation to draw from as there are only seven known photos of Rainey. But then, he says, he didn’t need much.

“You can create a character from one piece of information,” Lopez-Rivera says. An 8-by-10-inch headshot of Rainey gave him enough to design her dark-rimmed eyes and gold teeth.

In the 1920s, makeup products formulated for Black women were scarce. Rainey would probably have relied on homemade recipes, such as burnt cork mixed with animal fat for eye maquillage, applied with her fingers. Dry, matte lipstick of the era did double duty as rouge.

Lopez-Rivera envisioned Rainey’s makeup as a melting face, with the built-up tension and sweat of the story’s single sweltering day progressively disintegrating any concoctions Rainey would have coated on in the morning.

It wouldn’t be pretty, and he wasn’t sure Davis would be willing. But she was already there.

“I can’t stress it enough what a different experience you’re having … when you know you don’t have to handle the vanity of the actor,” Lopez-Rivera told an interviewer.

It took courage for Davis to transform into someone once mocked as the ugliest woman in show business. Yet Davis thought it would undermine the character to pretty her up.

Rainey was a Black woman living in 1927, Davis says. She was fighting irrelevance and invisibility. She was being overshadowed by her protégé. She couldn’t copyright her own songs. Her manager was bilking her.

“When you deal with that context, then you see the depth and scope of who she is,” Davis says. “I hope that I served the character well. I felt like I was armed with all the tools to be able to morph into this character.

“I will say that I had one of the best experiences of my life.”