Continue to Variety SKIP AD
You will be redirected back to your article in seconds
Jul 7, 2021 8:30am PT 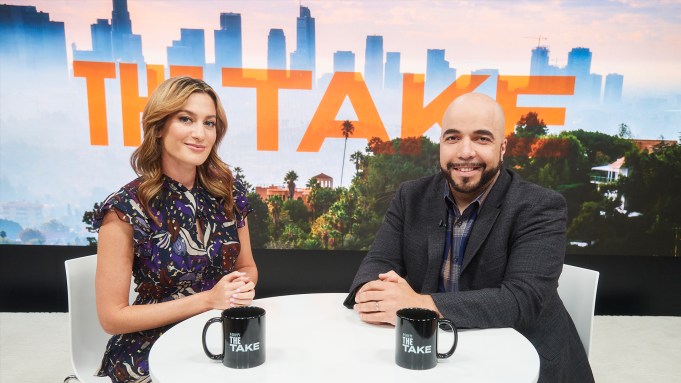 As part of Variety‘s ever-growing video strategy, a new weekly news series, “The Take,” will launch this week, in partnership with VIZIO.

“The Take” will take viewers through the top stories of the week from the entertainment biz, pop culture and media.

Hosted by Variety senior correspondent Elizabeth Wagmeister and awards editor Clayton Davis, the duo will analyze the biggest stories, highlighting major breaking news, while giving their unique expert analysis and exclusive insight on what everyone is buzzing about around Hollywood.

Launching on July 9, new episodes of “The Take” will be released weekly on Fridays on Variety.com, YouTube and Variety’s social media. The short-form series will also be available on VIZIO SmartCast TVs in July and August.

The series will be filmed in Variety’s state-of-the-art studios, located in their Los Angeles headquarters.

“We’re thrilled to be launching yet another exciting video franchise as part of Variety’s fast-expanding multi-platform offerings,” says Claudia Eller, editor-in-chief. “It has been magnificent working with our new VP of Video, Alex Castro, and our CMO Dea Lawrence on the launch of our new series ‘The Take,’ hosted by two of our stellar, in-the-know journalists, Clayton Davis and Elizabeth Wagmeister, who will give viewers their unique perspective on the hottest stories of the week.”

“During this year’s NewFronts presentation, we announced a new personalized and data-informed content offering called Features that allows us to deliver unique entertainment experiences to consumers. We are excited to debut this custom content experience with Variety,” said Steve DeMain, VP Engagement at VIZIO. “By knowing what our viewers watch in both linear and streaming environments, we can make informed decisions on the types of content that will resonate best and are pleased to offer our first Features custom series ‘The Take’ to SmartCast audiences.”

Two of the most recognizable and respected entertainment journalists in the business, Wagmeister and Davis will bring their real reporting and reputable sourcing from the Variety newsroom to the screen in the unscripted series.

Wagmeister is an award-winning broadcaster, investigative journalist, breaking news reporter and red-carpet interviewer. Named on Forbes’ 30 Under 30 list in 2019, she regularly represents the Variety brand as one of the most frequently-seen television experts, with regular appearances on “Good Morning America,” “Good Day LA,” “The Wendy Williams Show” and more.

Davis is one of the industry’s leading experts on award season, having covered film and television awards for more than 15 years. Prior to joining the Variety team in 2020 to lead awards coverage, he was the founder and editor-in-chief of AwardsCircuit.com. Davis is president of the Latino Entertainment Journalists Association, and a member of Critics Choice, AAFCA and NYFCO.