Newcomer Thuso Mbedu was surprised to discover how much she related to the lead role of Cora in Barry Jenkins’ Amazon Prime Video series. 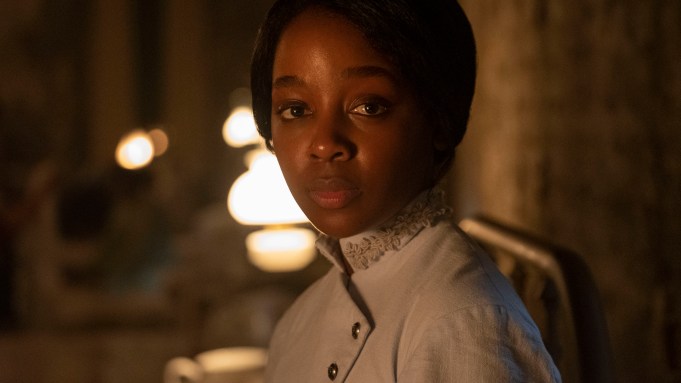 The Amazon original series “The Underground Railroad” centers around Cora, a young Black woman fighting to escape slavery. When Cora leaves, she encounters a fantastical vision of mid-19th century America, where the underground railroad is a real train running from state to state through tunnels — and each “station” brings its own promise and peril.

Cora carries a burden: As a young girl, she was abandoned by her mother, who escaped and vanished. Most actors would have to plumb their psyches to conjure the character’s feelings of abandonment and grief.

The actor who won the role, though, knows them all too well.

Thuso Mbedu, a rising star from South Africa, read Colson Whitehead’s novel once she was slated to screen test. The story shook her. Mbedu’s own mother had died when she was just 4. She, like Cora, had grown up grappling with that loss.

“I didn’t know how to articulate my feelings [when I read the book],” she admits. “Later on, as I was doing my preparation for the character, I realized that there are so many similarities between who Cora is and who Thuso is. But I remember just crying, weeping, weeping after reading the book. Not only for the story, but for myself.”

Mbedu won the part, earning a breakout role that would introduce her talents to American audiences, and she probably didn’t need that emotional connection to do it. Her acting chops are well proven; she’s been nominated for multiple awards and is well known for her International Emmy-nominated role as Winnie in the South African drama series “Is’Thunzi.”

The possibility of working with “The Underground Railroad” director-showrunner Barry Jenkins, who wrote and directed the Academy Award-winning best picture “Moonlight,” and “If Beale Street Could Talk,” was a dream come true for Mbedu.

“I knew that he told a beautiful story and he was able to create a beautiful picture,” she says. “[He’s] not just producing a story for the sake of a story but he’s saying something, he’s commenting on something.”

Jenkins, meanwhile, was looking for something specific in his star. “I wanted someone who could communicate a lot with [her] face, but also with her body.” In auditions, he says, “I just knew that Thuso was the perfect person for the part.” Even so, though, he points to a day on set when everything clicked and all doubt was banished.

“There’s a very simple moment where [Cora] is standing in the cotton fields and the camera slowly pushes in and lands on her face,” he says. “You see she is weighing the entire balance of her life against this decision to run. And I am like, ‘Yes, this is it. This is my girl.’”

With Mbedu cast as Cora, Jenkins built out the rest of the ensemble, seeking actors who connected with Mbedu.

British actor Aaron Pierre plays Caesar, Cora’s confidant and companion. Caesar, too, is enslaved on the Randall plantation, and it is he who encourages her to run away with him. At first, the idea seems absurd to Cora, says Mbedu, “because running means they catch you and they kill you and they make a whole performance out of it. Then, eventually, they do run, and she’s exposed to a whole new world. It’s nothing like she had ever imagined.”

Pierre says that while Caesar is one of many catalysts for Cora’s arc, “I believe that Cora already had everything she needed on that journey because of the fire in her heart and in her spirit.”

Another significant relationship for Cora in later episodes is Royal, a free-born Black man played by William Jackson Harper (“The Good Place”). “William as a person is very funny,” says Mbedu. “He’s very giving. But we had a lot of heart-to-heart moments because we had to be in a place where we completely trusted each other with our vulnerabilities.”

Joel Edgerton (“Loving”) plays Ridgeway, a slave catcher who becomes Cora’s implacable pursuer. Ridgeway has captured every slave he’s pursued save one: Cora’s mother. Still stung by that failure, he is especially determined to retrieve Cora.

Another element explored throughout the series is the maternal connection — not only between Cora and her own mother, whose absence is keenly felt — but Cora’s connection with young girls she meets along the way. Her feelings of abandonment really shift when she takes under her wing other runaway girls, who like her, are fleeing slavery.

Jenkins hopes that through this story, and through Cora, he restores full humanity in the generations whose untold suffering can only be imagined.

Mbedu, too, is passionate about what she hopes viewers will take away from Cora’s journey.

“When I took on the role of Cora and I went through her journey,” she says, “the character provided me with healing to wounds that I didn’t even know that I had. And so, I hope that when people watch the story, they too experience the same healing that I did and come out feeling a little bit better at the end of it.”