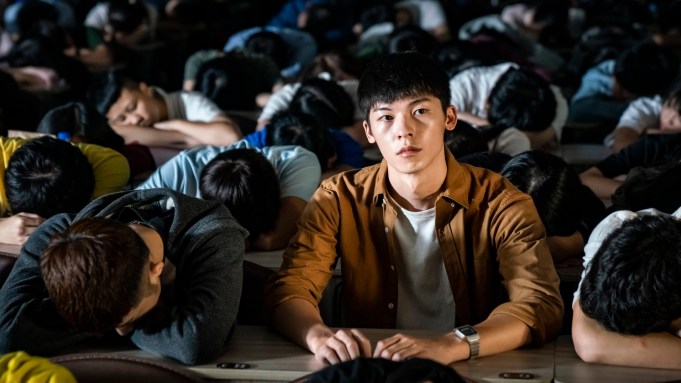 In a year ravished by the global pandemic, when millions have lost jobs, loved ones and mobility, an intimate family drama from Taiwan with profound lessons on survival appears particularly timely.

“A Sun,” directed by Chung Mong-hong, is a slow-burning study of a dysfunctional family devastated by unexpected tragedy and struggling to hold together in spite of surrounding menace. It was nominated for 12 Golden Horse Awards, the most prestigious kudos for Chinese-language cinema, and won six, including Best Narrative Feature, Best Director, honors for leading and supporting actors, and the Audience Choice Award. And since Variety chief critic Peter Debruge put it at the top of his Best Films of 2020 list, it has been gaining traction among critics in the U.S.

The film has raised Chung’s profile, but he’s no newcomer. He is an auteur with a genre-savvy sensibility who has made six features with eccentric flair.

He is known for distractingly gorgeous cinematography, stylized violence juxtaposed with mordant humor, and for casting colorful character actors that enliven roles of small-time gangsters and marginalized oddballs.

“A Sun” boasts all these, yet finds Chung reaching a new level of grace and spirituality, mourning the transience of life and the mystery of death. Its rich chronicle of sibling rivalry, fraternal betrayal, a father’s wrath and a mother’s sacrifice evokes fate and hubris with biblical and Greek overtones.

Chung exercises consummate control over his films; he is co-writer, director and cinematographer for “A Sun.” His script, co-written with Chang Yaosheng, is packed with plot twists that jolt audiences while approaching a deeper understanding of each character’s vulnerability. As Debruge wrote, “Characters we think we understand at first glance gradually reveal what they’re capable of.”

“Seize the day. Decide your path” — that’s the catchphrase middle-aged driving instructor Mr. Chen (Chen Yi-wen) repeats to make his students focus and maintain a sense of direction; it is also his own motto. Yet, as the pandemic has taught anyone who had a plan for life, no one, least of all Chen, can have his hands on the wheel all the time.

As if to prove this point, the film sports an opening sequence that’s one of the most stunningly choreographed and unforgettably macabre in recent cinema. In a rash act of vendetta, Chen’s younger son A-ho (Wu Chien-ho) and his cohort Radish (Liu Kuan-ting) barge into a restaurant and … let’s say, the hot pot gets spiced with extra ingredients. While Chen completely writes off A-ho, he is less prepared for what happens to A-hao, his seemingly perfect older son. As Chen’s illusory confidence crumbles, it is the women around him who pick up the pieces, as his wife, Qin (Samantha Ko), takes in A-ho’s pregnant girlfriend and builds a new home for her son.

Taiwan’s older generation, haunted by colonization followed by 38 years of martial law, has to some degree internalized or acquiesced to paternalistic, patriarchal systems. As Taiwan metamorphoses into one of the most open societies in Asia, economic and cultural changes leave men like Chen feeling like their status is threatened, while putting the younger generation at a crossroads. Sometimes, the pressure to know where one’s heading is debilitating. In an interview, Chung reflected on this creative motivation: “It’s getting harder for the world to carry on,” he said. “Human relationships have become much more complicated. … How do we keep moving forward? … We can only look at the sun and bask in its rays.”

Chung’s recurrent themes of loss and losing one’s way reflect his concerns for the ways the ground is shifting around him. Driving is his favorite metaphor to express his protagonists’ quixotic gambits to move ahead. In his Cannes Un Certain Regard premiere “Parking,” a man is trapped by double-parking; in “Godspeed,” a taxi driver is roped into a meandering road trip. “A Sun” ends with a moving scene not of driving, but of mother and son riding a bicycle that swerves precariously under their weight, yet keeps inching forward. As sunlight steals through the trees, the image suggests a fragile hope.

Taiwanese family dramas are often associated with wry, nuanced masterpieces such as “Yi Yi” or “Eat Drink Man Woman.” Chung imbues his fictional families with the same culturally conditioned repressions, but he is probably the most unflinching and inventive filmmaker of his generation to explore their dark, unfathomable aspects. His fascination with complex father-son relations dates back to his debut “Doctor,” an eerie documentary on an oncologist derailed by his son’s suicide, and “Soul,” a gothic psychological thriller showing the lengths a father goes to protect his son — but not until “A Sun” has Chung let his own compassion seep into the screen.

The ensemble buzzes with natural chemistry. Chen Yi-wen — himself a director — richly deserves his Golden Horse Best Actor award for crafting an ambivalent father who elicits both fear and pity. Another standout is Liu, Golden Horse Best Supporting Actor winner for his turn as Radish, whose charismatic smile and deferential manner belies his creepy malice.

Part of the allure of Chung Mong-hong’s films is his cinematography.
With a Master of Fine Arts in filmmaking from the School of the Art Institute of Chicago, Chung’s cinematography has furnished all six of his features with his own unique visual language.

A rare breed in Taiwan’s industry, he performs triple duty as writer-director-DP, leading the camera department under the pseudonym Nagao Nakashima. He has said he prefers synching these processes because he can tell his actors to adjust their positions or expressions directly, without looking into a monitor. The result is as close a realization of the director’s script and vision as he can get.

In “A Sun,” the message is that without darkness one cannot see the light. Chung’s camerawork instills that notion in every scene, distilled into light and shadow, especially scenes of the two Chen sons. While black sheep A-ho is always drawn into crime and violence on stormy nights, good boy A-hao is immortalized when he strolls through a zoo in blinding daylight.

Another scene, where Mr. Chen confides a secret to his wife at a mountaintop, is a tour de force of backlighting that creates a dance of light and shadow that symbolizes the couple’s renewed intimacy, while also hinting at the tantalizing moral ambiguity of Chen’s act.

Chung’s films, like many other Taiwanese titles, have benefited from the backing of the Taiwan Creative Content Agency, which has long supported local cinema and culture and promoted Taiwanese films (including “A Sun”) seeking global distribution and recognition. Chung, in turn, uses his clout to help new directors get their projects off the ground. To date, he has produced four films (“Xiao Mei”; “The Great Buddha+”; “Classmates Minus”; and “A Leg,” directed by “A Sun” co-writer Chang Yaosheng) and acted as DP for all four. The works made their rounds at festivals and signal the arrival of a formidable new generation of filmmaking talent in Taiwan.