Patty Jenkins Urges Women to Aim for Greatness — Whatever Their Field 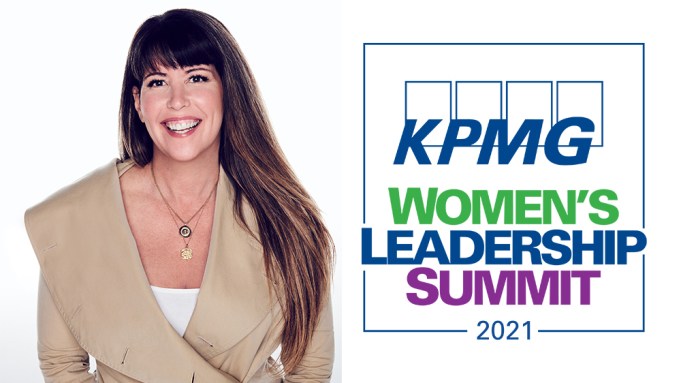 “First woman to … ” is the description repeated over and over when it comes to Patty Jenkins. But she wants to set something straight: Gender has nothing to do with it.

Accepting the Inspire Greatness Award at the 2021 KPMG Women’s Leadership Summit, the “Wonder Woman” director says her success lies in refusing to qualify herself as a woman filmmaker.

“If I deal with someone who has a gender problem, that’s their problem,” says Jenkins. “They can keep it on their side of the fence. I’m still going to try to win you over and get you to do what I want you to do, regardless,” she laughs.

It’s a message that likely resonated with the 300 rising female executives who attended KPMG’s annual flagship event designed to propel more women into the C-suite. Paul Knopp, the company’s U.S. chair and CEO, says Jenkins was honored because she’s “a trailblazer in the film industry, and is paving the way for future generations of women to succeed.”

Known for breaking barriers and then keeping them down to give others entry, Jenkins earned awards and accolades for her film debut, “Monster,” the first feature about a real-life female serial killer. With “Wonder Woman,” Jenkins became the first woman to direct a major superhero movie. It didn’t hurt that the film was also DC Comics’ highest-grossing superhero film at the time of its release, and still holds the highest critical acclaim of all films within the DC Extended Universe.

Jenkins’ trick? To see superwomen as just that — women.

“One of my favorite things about Wonder Woman was that she is authentically and wholly a woman, and isn’t apologetic about it,” says Jenkins. It is a sentiment she echoed when addressing attendees at the KPMG Women’s Leadership Summit, calling the DCEU’s Amazons a tribe of superheroes because they recognize strength as a core element of femininity, and are comfortable with each other’s prowess.

To date, “Wonder Woman” has remained the highest-grossing live-action film directed solely by a woman — domestic and worldwide.

“When it succeeded the way it did, and when it started to make the money it did, that’s when I was able to finally see it was going to make a difference,” says Jenkins. “I knew the thing that would open the minds of people who wouldn’t otherwise was to see it was commercially viable.”

Women executives attending the KPMG Summit, which is now in its seventh year, relate to the need to prove their worth through the bottom line. To date, nearly half of past participants — all of whom were nominated to participate by their CEOs — have been promoted within their companies, with 20% ascending to the C-suite.

Keen to learn all aspects of filmmaking, Jenkins started her career working as a cameraperson. After nine years in the department, she became successful, but also pigeonholed. As Jenkins tells it, the only way to move forward was to start over. Completely. Which meant refusing work, taking out student loans, and moving to Los Angeles to attend film school.

“It was terrifying, humiliating and humbling to be 30 years old and struggling financially as a filmmaker after having worked,” she says.

In 2003, “Monster” was released, grossing $58 million from a $2 million budget. “Nobody understood what we were doing and why it would make sense,” she says. “We showed it to all the studios in town. I’ll always remember one exec saying to me, ‘Oh, honey. Nobody wants to see a movie like this.’

“Until you do it, the industry can struggle to believe it can succeed.”

For her follow-up, Jenkins wanted to make a film about her childhood favorite, Wonder Woman, but at the time, the Amazonian princess wasn’t on a studio slate. In the meantime, Jenkins had started a family and moved into directing television, which has shorter hours and more flexibility. When the time came to return to feature films, a different studio offered her a high-profile superhero picture. Then came the call about “Wonder Woman.”

“There were chunks of years in between,” says Jenkins. “But it turned out my next movie was the one I wanted to make.”

These days, Jenkins is busy breaking yet another barrier as the first woman to direct a Star Wars film.

“I think there can be a misconception that films that come from my gender would somehow be more feminine or less a Star Wars or superhero film. But ‘Rogue Squadron’ is a very universal Star Wars film,” she says.

“I’m proud to do films about women sometimes, but I want to make all kinds of films, just like everyone.”

In light of her success, Jenkins has proven the lack of female directors was holding the film industry back.

“I always think back to how many women told me they didn’t realize they loved the action genre until they watched the Wonder Woman films,” says Jenkins. “It made me realize, of course, we all love action. Of course, we all want to save the day. We all want to fight for what we believe in. But when the story’s point of view wasn’t relatable, it wasn’t impactful for women.”

As a wonder woman in her own right, Jenkins encourages women to dare to fly high. “When I left film school, I assumed we’d all be trying to make masterpieces,” she says. “What amazed me was how many people I met who weren’t even trying.

“‘Monster’ was supposed to be a crappy straight-to-video film, but I tried to make it something more than that, and that’s how I got here,” Jenkins adds.

“Look at the company you’re running and think, ‘What is the greatest ultimate outcome?’ Instead of focusing on where you are, go for greatness.”