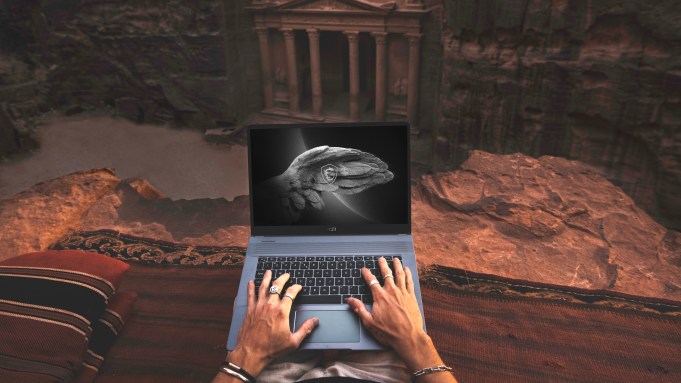 Content creators are always on the hunt for that magical device — a robust, intuitive tool that moves seamlessly to just about any location; one that inspires while still looking polished and sleek during the journey.

Whether it’s a long battery life, a large, vibrant screen or more processing power than they think they’ll need, creatives often struggle to find all the items on their wish list in one package.

That’s where the MSI Creator Z16 comes in.

After setting a high bar with gaming laptops such as the GS series and GE series , MSI set its sights on making a laptop that delivers exactly what content creators need. Its  Z16 is intended for everyone from YouTubers, who need a laptop that will let them work with huge files on the fly, to animators and filmmakers who demand enough processing power to take risks with their art, unbound by the limitations of their technology.

Reviews are quick to point out Z16’s stylish, sleek and sophisticated design, which MSI says is inspired by the golden ratio, a mathematical formula describing proportions considered aesthetically pleasing by artists and architects.

Its design and underlying computing power aim to attract both experienced pros and newcomers just beginning to create professional-grade content, whether their goals are entrepreneurial, personal or both. MSI’s Z16 is intended to empower people to efficiently and easily express themselves in digital spaces.

“Creating content is something that everyone will gradually get into, and we wanted to offer something at a reasonable price that works with how people live.”

The creator economy — businesses that provide creators with tools and strategies to monetize their content — has expanded rapidly in recent years as millions of people around the world have started posting their adventures, thoughts and ideas. The Information, a tech news site, estimates that more than $50 billion in venture capital has flowed into creator start-ups in 2021 alone. Content creators who already post regularly can’t be slowed down by tech, and with the sector continually attracting new creators, it’s vital to make computing power more accessible.

“The MSI Creator isn’t for just a casual streamer,” says Chun. “It’s for someone who really wants to do some editing or a big project. It’s for someone looking for quality not only on the performance of the hardware but also the look and the design. They want something a little bit chicer.”

Christian LeBlanc, a YouTuber who chases exotic locations for his Lost LeBlanc channel, trusts the Z16 for a wide range of projects, especially when working from the wilderness. During a recent adventure on location in Kenya, he offered a behind-the-scenes look at what it’s like to film a mass migration of animals on the African plains using just a pared-down setup. He says his MSI laptop has the power, leaving him to focus on creating the content he loves.

“A laptop isn’t just a power tool,” says LeBlanc. “It becomes part of our daily lives, and that’s why I love that the Z16 has a high-quality finish matched with state-of-the-art performance, making this a laptop any digital nomad would be proud to have.”

Like their You Tuber colleagues, pro creators can’t seem to get enough of the MSI Creator. Concept artist Colie Wertz, whose credits include world-building and spaceship design for major science fiction franchises, has no time to waste. His day-to-day is dedicated to bringing his clients’ ideas to life. He can’t afford to have his laptop slow down because the CPU or GPU are overheating. “MSI’s Z16 has an appropriate cooling system in place to get the heat out and allow your creative juices to keep flowing,” notes Wertz. “‘My computer got too hot’ is an antiquated phrase that MSI isn’t going to let come back.

“I cannot stress the cooling aspect enough, as a new generation of artists move into these never-before-seen GPU-intensive endeavors.”

The Z16’s 16:10 screen and color accuracy are also proving to be major selling points for creators who, as Chun notes, might spend up to 20 hours a day on their laptops making sure things look just right.

Though LeBlanc took his MSI laptop into the field with lions and Wertz uses his to collaborate on huge film projects, they’re both focused on the same thing — making the best content possible. And with the Z16 on board – bringing the best in design and performance – content creators can take on any project in any location and know they’ve got the tools they need inside the most stylish case imaginable.

“It’s a great time to be an artist working in digital media,” Wertz adds. “MSI’s Creator Series has answered the call to ensure the powerful tools needed to render your latest visions are running both efficiently and effectively in a production setting on a laptop.”

To learn more about the MSI Creator Z16, click here.