Meet the Cast of Amazon Prime Video’s ‘The Underground Railroad’ 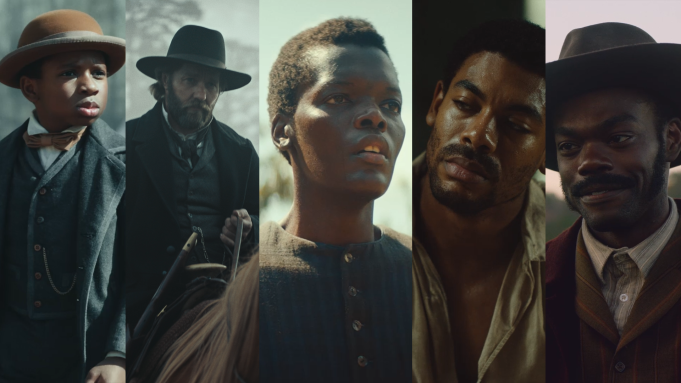 As a boy, Jenkins imagined an underground train network taking enslaved people to freedom. “This whole big-ass show kind of came out of me just wanting to realize this childhood dream of Black people building trains that run underground,” he says.

In his adaptation of the Pulitzer Prize-winning novel, Jenkins has delivered a sweeping, richly photographed epic, rivaling the grandeur of big-screen classics.

The protagonist, Cora (Thuso Mbedu), is a young woman who escapes bondage on a Georgia plantation, only to discover that enslavement doesn’t end when the shackles are broken. The film uses magical realism to heighten Cora’s experience on her journey.

The trains are metaphors for progress, passage and power. As Cora travels from state to state, episode by episode, the visual and aural aesthetics of the series change to mirror her states of mind.

Many of the cast of “The Underground Railroad” are unknown to most viewers. Here’s an introduction:

South African newcomer Thuso Mbedu plays Cora, an outcast even among the enslaved because she was abandoned by her escaped mother, Mabel (Sheila Atim).

Mbedu, who lost her own mother at age 4, says she shares many similarities with Cora.

“Through the character of Cora, I felt seen,” says Mbedu. “There were moments in my life where it hurt to hope, and so no hope was better than false hope. I think that’s one of Cora’s driving forces.”

Cora is both naive and hardened by life. Brave, but fragile, Mbedu says. “But she’s learning as she goes along.”

Each new episode offers a glimpse into a different part of Cora’s psyche and the psychology of America as a nation, says Mbedu.

Caesar is the catalyst of Cora’s journey.

Promised manumission in Virginia, then sold to a plantation in Georgia, Caesar encourages Cora to run away with him and see what life is like beyond their plantation.

Pierre says he and Mbedu built a genuine friendship that is reflected in the on-screen relationship between Caesar and Cora.

“Caesar finds moments of peace in a place where peace is nonexistent,” says Pierre, of escaping through reading. He reads “Gulliver’s Travels” to Cora, foreshadowing her adventures to come.

Pierre believes showing unapologetic — sometimes harrowing— imagery is important. Such visuals allow audiences to engage in a visceral way, he notes. “That visceral experience will hopefully encourage people to reflect on the realities of what did happen.”

His hope is that the story will cause people to reflect on what can be done to advance our empathy.

Pierre says, “We still have a very long way to go in regard to empathy, understanding and unity.”

Ridgeway is obsessed with capturing Cora because her mother eluded him. He weaponizes Cora’s sense of abandonment by her mother against her, says Edgerton. “He feels abandoned by his own father and he sees himself in her.”

Edgerton describes his character as “complicated, cruel and misunderstood.” Ridgeway’s abolitionist father gave up on his son. So he became the opposite of his father, the actor says.

“Ridgeway is not a good person,” says Edgerton. “He’s a villain.”

Yet an indisputable love story in the series is the dysfunctional father-son relationship between Ridgeway and Homer (Chase Dillion), a young Black boy owned by Ridgeway, who repudiated freedom when offered and relishes his work with Ridgeway, tracking down other Black people.

“I always think stories are more interesting if we understand where the bad people are coming from,” says Edgerton. “It’s really about getting an audience to understand what makes someone like Ridgeway tick.”

Chase Dillon delivers a precocious performance as Homer, Ridgeway’s surrogate son and sidekick. Homer uses the bounty hunter’s keys to lock his own shackles at night. His job is to catch other Black people—and he’s freakishly good at it.

Dillon’s Homer is so horrifyingly intriguing and brilliantly acted that it is impossible to look away from him.

Dillon says he wanted to be part of “The Underground Railroad” because of its gravity. The story is relevant today, the 11-year-old adds, because what happened in the 1800s is still happening.

“I feel God in this,” Dillon says he told his mom after reading the script.

“When you call ‘cut’,” Jenkins says, “Chase is going to dance, he’s going to smile—it’s almost like he’s going to find a way to remind everybody that, ‘hey, we’re just playing, right?’”

Co-star Mbedu says sometimes she had to put distance between herself and Dillon, with whom she had become close, for the sake of their characters.

“Barry told us we were not allowed to hug,” Mbedu says. “Which was hard!”

“It was really beautiful seeing him grow in the process,” says Jenkins.

“[The Homer] character is about indoctrination, it’s about grooming, it’s about how we internalize self-hatred,” says Jenkins. “Then here comes Chase Dillon and somehow through the spirit or good parenting or whatever the hell, he’s a conduit for us to explore it.”

As a free-born Black man who rescues Cora at one point in her journey, Royal is ahead of his time, says William Jackson Harper about his character. “Royal’s mindset is very modern,” he adds.

Royal has known only freedom and Cora has only ever been enslaved or in flight. “There is a gulf between their two experiences,” Harper says.

He is a complete paradigm shift for Cora, a symbol of the possibilities offered by an unfettered existence.

Royal takes Cora to a colony of Blacks who are legally — and economically — free. While she experiences joy there, her life has been a series of things taken from her and she anxiously waits for the other shoe to drop, Harper explains.

What sets this project apart for Harper is that the heart of the story is resistance rather than endurance.

“I need to see, as a Black man, that we didn’t just put up with stuff, we fought to change it,” says Harper.

Jenkins discovered Ugandan-born British actor Sheila Atim and series co-star Andre Pierre, who plays Caesar, when both were in a London production of “Othello.”

Atim plays Cora’s escaped mother, who left her behind.

She is the series’ signifier of freedom, illusory as it may be. Her freedom ignites Cora’s feelings of loss and abandonment, and Ridgeway’s rage that she continues to elude him.

Mabel propels the story because so many other characters live in the wake of her legacy, says Atim. “They believe she has imbued them with the drive to leave.”

Atim says her own mother left Uganda at a time of conflict in a similar pursuit of something better, “something beyond just accepting the brutality of the present time.”

Although raised in London, Atim says her experience as a Ugandan-born person — “the sense of displacement and feeling like there is a home elsewhere in the world” — factored significantly in her process for this project.

Trans-Atlantic slavery, which was a huge industry for hundreds of years, shaped the world in a profound way, says Atim. “We’re still dealing with that,” she says. “That’s why it’s really important to keep on revisiting these topics in new ways.”