FX’s ‘Mayans M.C.’ Finds Greatness in the Struggles of Those Left Unseen

How co-creator/showrunner Elgin James and Emmy-nominated actor Richard Cabral tapped into their pasts to deliver an authentic story of redemption. 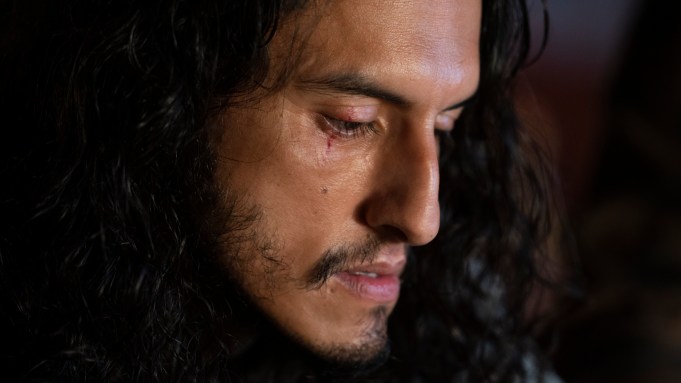 Before the first season of FX’s “Mayans M.C.,” co-creator / showrunner Elgin James and cast member Richard Cabral, who plays Coco, met at The Brite Spot diner in Los Angeles and agreed that in making “Mayans” they were shooting for “it,” an ineffable but palpable sense that they’d tell a story through characters that felt authentic and emotionally honest.

“There’s really no true definition,” says Cabral, who was nominated for a supporting actor Emmy in 2015 for ABC’s “American Crime.” “It’s something that took us through the depths of hell but also let us see the greatness of life. To me and Elgin, it’s suffering prison, suffering a broken home and broken communities and trying to bring art to it.”

“You know it in your gut,” Elgin says. “It’s something that gives you goosebumps, something where I felt not alone, where I felt seen — and so much of this show is about making people feel seen.”

In 2021’s third season of “Mayans,” Coco falls into a drug addiction that he tries to keep secret from his fellow motorcycle club members. For the storyline, Cabral, already a tall, lean presence, lost between 25 and 30 pounds, powered only by almonds, berries and green juice.

“My biggest thing coming into this season was that if I felt it in my body, then the rest will follow,” he says. “So if I sacrificed, if I suffered, if my body was starving, then I believe that this is the performance that Coco would deliver that we needed to see.”

The collaboration between James and Cabral dates back several years to their first meeting, at a WGA panel on prison reform that also featured members of the then-current presidential administration.

“I’m so nervous because everyone’s gonna be way fucking smart, so I showed up early and planned to just cram all these stats on my phone,” James recalls. “This car pulls up next to me and it’s Richard Cabral doing the exact same thing.”

James went in to meet the other panelists first; a short time later Cabral entered.

“He gets out of the elevator with his head bowed, sort of looking at the floor, so shy and respectful, and I understand exactly what he’s doing,” James says. “I do the exact same thing everywhere I go. I show up and I apologize for being there, for existing. It’s like I carry this body bag of shame with me everywhere that I go.”

James and Cabral were introduced to one another (“It’s really obvious that we should be talking to each other, because we’re the tattooed, brown people there,” James says). They discussed the 2016 film “Fences,” which they had both just seen.

Though they grew up on opposite coasts, both men were in gangs and in prison before finding their way into life-saving artistic pursuits.

In their conversation before the WGA panel, Cabral brought up tiny prison windows, covered with decades of human residue. James had a revelation.

“Usually, I have to divide my worlds: This is a world that doesn’t really understand this other thing that I do, screenwriting,” James says. “There’s always a separation, but here’s someone who gets both worlds.”

James told Cabral about “Mayans” in that moment and said he wanted him to be a part of the series.

“You have all these things in your heart and you can’t express them, because the people around you don’t really understand,” Cabral says. “So to have Elgin not only as a collaborator, but to have him as a friend, it has been one of the most powerful things in my career.”

Over the years, they’ve shared stories and bonded over the similarities in their pasts, including that sense of shame that James says “comes from being told that you’re worthless, believing you’re worthless when you’re little, coming from a household where I wasn’t safe. … And you fulfill that destiny. And that’s what I did for a couple decades.”

That’s reflected in the story of Coco, who killed his mother in Season 1.

“We always knew one day the chickens were going to come home to roost, and that’s what Season 3 was finally, [a chance] for both of us to be able to explore that,” James says. “‘Muse’ is such a weird word but knowing that I had this vessel that I could take what’s fucked up and broken inside of me and put it into a bunch of consonants and vowels and awesome letters and periods and commas … and then I knew [Richie] was gonna take it to a whole level that I couldn’t even imagine, and that’s exactly what happened.”

James describes Cabral’s performance less as a stretch and more as a “drilling down into the earth” as Coco’s situation worsens.

“I would start thinking about how it’s making me feel watching him just sink into the truth and sink into the marrow of each scene,” James says, noting that Cabral’s dedication and performance could be felt by the entire production. “Richard just elevated everybody. Even in the read-throughs, everybody saw what Richie was doing and where Richie was going, and everyone upped their game.”

“Mayans” achieved the “it” Cabral and James set out to find in Coco’s story that leaned into the theme of generational trauma which both men are acquainted with personally.

“There’s a numbness that comes from trauma, we don’t feel anything,” James says. “But Richie made me feel things inside I’m not used to feeling.”