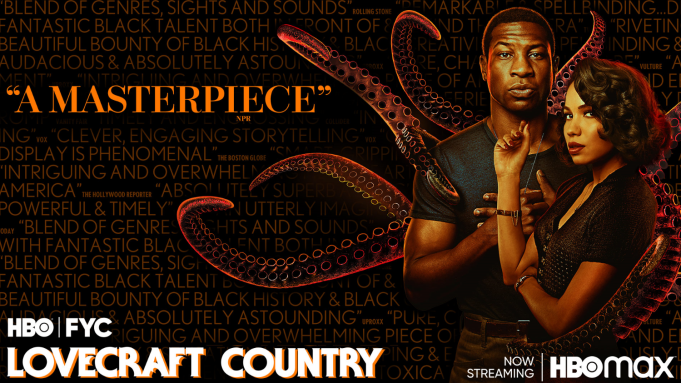 Set in the 1950s, the 10-episode series was created by writer-producer Misha Green, who adapted Matt Ruff’s novel of the same name. Majors portrays Atticus Freeman, a Korean war vet and bibliophile who returns to his hometown of Chicago after learning that his father Montrose (Michael Kenneth Williams) is missing. Jurnee Smollett plays Letitia Lewis, aka Leti, a photographer and civil rights activist who has also recently returned to Chicago.

Atticus is convinced that Montrose’s disappearance is tied to a hidden truth: Many of famed horror writer H.P. Lovecraft’s most ghastly stories are real. The quest to find Montrose turns into a harrowing adventure where it’s sometimes a toss-up whether the greater menace is supernatural monstrosities or the everyday hostility of white racists.

“In addition to dealing with the aliens and the legacy and the witches and the warlocks, the Shoggoths, you also watch [the characters] deal with what it is to be Black day today,” says Majors.

The series also makes Black characters the stars in genres that have often excluded them, such as sci-fi fantasy, horror and action-adventure. As Majors says of Episode 4, Black people get their “Indiana Jones” moment. It’s a place where “Black and brown folks [are centered] in stories they wouldn’t be traditionally centered in,” Smollett notes. Green adds, “We use genre as a doorway to something deeper.”

In the “Series Rewind” video above, Majors and Smollett discuss the period, how they found similarities in their characters’ lives and their own, plus the monsters Atticus and Leti have to fight, both real and imagined.

Smollett observes, “We discover … that there [are] a lot of secrets, not just in our pasts that we unfold but also in the … world, such as magic that exists, that turns our world upside down.”

The opening of “Lovecraft Country” is an “old-school overture,” explains Majors, referring to the soundscape music. “And you see all [of] that … through the point of view of Atticus.” In the scene, Atticus sees himself fighting in the war, encountering a monster, a woman who looks like his former wartime girlfriend (Jamie Chung), plus baseball player Jackie Robinson.

“You see that he was and is obsessed with the sci-fi elements of the world,” Majors adds. “You see the monsters [as Atticus is looking around] and ultimately you see his connection to home. You see Jackie Robinson dealing with … the biggest monster … in the Lovecraftian world.”

The era was a time of “constant threats … and not knowing when your life would be in jeopardy,” observes Majors. Sets depicting the South Side area of Chicago show nostalgic hues of pink and yellow, but it wasn’t a time of “sunshine and butterflies and skates” for Black people.

In one scene, Leti senses that she, Atticus and his Uncle George (Courtney B. Vance) could easily be killed after sitting down in a small-town diner that they thought was still under Black ownership. Since she has traveled the U.S. dealing with civil rights, she picks up the danger signals. She warns them, quickly grabs the car keys and speeds away with George on the passenger side and Atticus in the back. “Leti is very much a free spirit, a woman who can’t be confined,” says Smollett. “She is so active and does take control of situations in such an unapologetic way.”

Atticus and Leti have known each other since childhood and what was once childhood affection is now full-fledged attraction. Yet both are reluctant to admit their true feelings because of the experiences that have shaped them — from Atticus’ emotional wounds from the war to Leti’s liberating views.

In the video, both actors talk of their fondness of the characters but admit that playing them sometimes hit very close to their real lives. In portraying Leti, Smollett was forced to “stretch beyond (my) limits.” She says what particularly hit a nerve was that Leti doesn’t know her father and was neglected by her mother. “I know the pain of being estranged from a parent you love,” says Smollett. “It’s a pain, it’s a wound that you forever work, trying to heal. And I, like Leti, also unfortunately lost my dad before I could actually really heal that wound.”

Majors recalls a scene where Atticus asks his father what to do after learning that Leti is pregnant with his child and he says the scene reminded him of when he became a father at an early age. “To me, that was one of the most healing, one of the most personal scenes I’ve ever shot,” says Majors, 31, who has an 8-year-old daughter. “There was a moment in my life, personally, when I didn’t know what to do … being so young.”

Despite some painful moments while in character, working on “Lovecraft” enabled Majors and Smollett to indulge in a “playground” of genres where Black people aren’t often seen. “[‘Lovecraft’] is very much a part of that disruptive wave that has been happening,” says Smollett, “and it makes the story incredibly profound.”

Majors adds, “I hope [when people watch ‘Lovecraft Country’ they are] inspired to be adventurous in their lives, to not be confounded by the status quo that society has given us.”