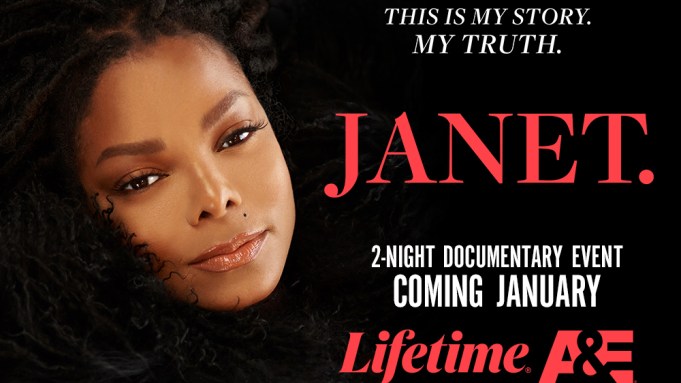 Next year promises to be an exciting one for Janet Jackson fans.

Not only is the pop icon releasing her first album since 2015, but she is the subject of a two-part, four-hour documentary, simply titled “Janet,” which will air on both Lifetime and A&E in January 2022.

The docu details the legendary singer’s 50-plus year career, including the most talked-about moments of her life.

“Janet” will also include never-before-seen videos of the superstar, as well as her take on motherhood and how she processed becoming a parent later in life, says Lifetime’s senior VP of unscripted development and programming, Brie Miranda Bryant.

“There has never been this level of access to one of the largest American music icons in American pop culture,” says Bryant, who executive produced the project alongside Rick Murray.

“Although the documentary is over five years in the making, Janet’s life has been meticulously documented and she maintains a treasure trove of archival material that really does document the larger portion of her life.

“We are very excited to see what conversation the series generates and are pretty confident that folks will just fall in love with Janet all over again. And then again and again.”

The recently released teaser for “Janet” features other stars from the music world, including Missy Elliott and Paula Abdul, along with Tito Jackson, Janet’s brother, all of whom will appear in the documentary.

“Those that are participating in the series have a great respect for Janet’s music and her craft,” says Bryant. “There was a ton of reminiscing around the inspiration she ignited and the times in their lives that she’s personally touched. It’s a hypnotizing reflection of the last 50 years of American pop culture. And there is no better creative team than Rick Murray, Ben Hirsch and Kevin MacDonald to help bring it alive.”

In addition to receiving a plethora of prestigious awards and nominations over the years, Janet Jackson has sold approximately 100 million albums, first releasing her eponymous debut album at the age of 16. Throughout her decades-long career, the now 55-year-old has released a total of 11 studio albums that include iconic recordings like “Control,” “Rhythm Nation,” “The Velvet Rope,” and “All for You.” Alongside the announcement for the new documentary, Jackson revealed that her next album is to be released next year.

But while “Janet” will debut on Lifetime and A&E in early 2022 in celebration of the 40th anniversary of the singer’s first self-titled album, Bryant and the singer insist that the four-part docu is not a marketing device.

“This is my story told by me,” Jackson says in the teaser. “Not through someone else’s eyes.”

“Authentic stories are most times, by nature, informative,” says Bryant. “But they’re also hysterical, inspiring, heartbreaking, liberating. Everyone has a story. We’re just specifically seeking out the stories of a lifetime.”

In the last two years the network has done just that by offering audiences a transparent look at the lives of some of the country’s biggest celebrities. Lifetime programs have included “Surviving R. Kelly,” “Wendy Williams: What a Mess!” and a look at the relationship of the late Whitney Houston and her daughter Bobbi Kristina Brown, “Whitney Houston & Bobbi Kristina: Didn’t We Almost Have It All.”

Most recently, Lifetime partnered with decorated gymnast Aly Raisman, who has spoken out about the sexual abuse she experienced through her involvement with the U.S. gymnastics team, on a documentary special about her journey to healing. Raisman speaks with other sexual abuse survivors.

“We are creating content that is highly entertaining — and most times, highly emotional,” explains Bryant. “That doesn’t mean being all boo-hoo-y. Most times, those emotions push you to the edge of your seat. I find them to be very empowering.”

“Janet” is part of 70 hours of documentaries that A+E Networks is offering this year across its portfolio of top brands – A&E, History and Lifetime. “Janet” will live on both Lifetime and A&E.

“It isn’t often that we have the opportunity to collaborate on actual creative, across brands,” says Bryant. “Janet’s stardom completely captivates a very vast audience, so we made the collective decision to have the documentary series be a cross-network event — both creatively and in terms of how we launch the series.”

Bryant’s desire “to be the platform that women want to tell their stories on” is realistic given the size, scope and impact of Lifetime’s recent docu lineup and the impact it has had on audiences. It also doesn’t hurt that an ultra-private megastar like Jackson has endorsed the network via “Janet.”

“Some stories will have a resounding echo, and we hope, an impact on popular culture,” Bryant says. “Others will be smaller shouts, but worth the journey anyway.”