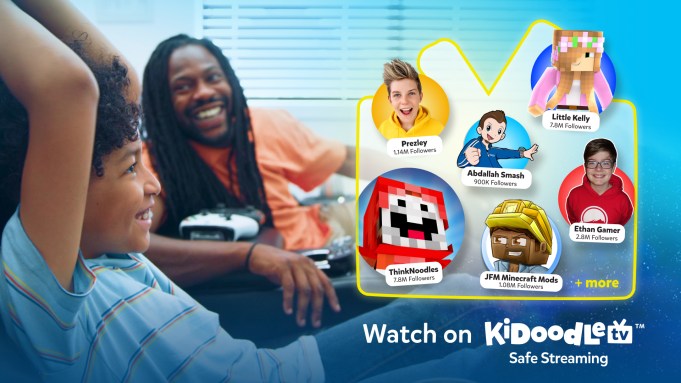 Video games were big before the pandemic, but they hit an entirely different level of popularity in 2020. And with the industry’s expansion came an incredible increase in demand for gaming programming, especially among children.

Kidoodle.TV has been at the forefront of that market, thanks to its parent- and kid-approved content. This safe streaming service reports that it has increased its library of gaming titles by 500% since 2020 — and it’s still launching dozens of new shows each week, as demand is showing no signs of letting up.

“Any group of kids are going to talk about what is cool to them, and gaming is that subject, it’s what everyone is doing. If kids are talking about gaming, they are talking about us and, better yet, parents are revering us for the amount of effort that contributes to ensuring their children are free from harm while enjoying something they love,” says Brenda Bisner, the company’s chief content officer. “There is a lot of danger kids face when streaming anywhere, and gaming is no different; that is why we have stepped up to meet this need around the world.”

Many video game-focused streams on other sites feature content that is wildly inappropriate for children, the company explains. To keep kids safe, streams and programs on Kidoodle.TV are screened by humans before they’re made available to viewers. Additionally, the company ensures that all of the featured games are appropriate for the 12-and-under crowd, meaning no violent action titles or first-person shooters. Offerings range from the family-friendly franchises parents may remember from their own childhoods to newer titles adults may not be aware of (but kids likely know inside and out).

Young players want to do more than just play the games, though. They devour any media surrounding them, from walkthroughs to watching others play and create within the titles. While that might be worrisome to parents, who have heard or read a regular flow of horror stories about the video game industry, the right games can actually help encourage creativity and foster a sense of connection among children.

In fact, according to a recent survey by the Entertainment Software Association, 59% of parents said their child played educational games during the pandemic — and 63% of those parents said the games were effective in helping their child perform better in school. Math and science were the two biggest subjects kids picked up.

What many parents don’t realize, however, is that video games also impart soft skills in players. Games bring together people from across the world, which can help teach a sense of empathy and inclusiveness that can be hard to come by in isolation. Kidoodle.TV’s game-streaming team reaches 12 million monthly active users in 160 countries, giving kids the chance to see what other societies are like as they enjoy playing their favorite games together across different time zones. They even learn something as simple as patience.

“I focus on an ongoing theme of ‘practice makes perfect,’” says content creator Abdallah Smash. “Nobody is an expert at the beginning of trying something new — and that’s okay. When I play through video games, it’s inevitable that mistakes or sub-optimal plays are made and it’s how you learn from them that really matters. If you’re in a tough spot, I like to elaborate on how I can positively get myself out of it and overcome difficult challenges. Never giving up and pushing towards a positive resolution is the key to success that I strive to teach young viewers.”

Other soft skills that video games impart include decision-making, teamwork, collaboration, adaptability and, in some cases, leadership skills. Nearly three-quarters of parents played video games with their families last year, according to the ESA. The vast majority believe that these titles can be educational and improve cognitive skills — and over half felt that video games have the potential to help teach kids how to win and lose in a healthy manner.

Game streaming is an offshoot of that, giving the family something they can watch and discuss together. While the programs on Kidoodle.TV are made with children in mind, adults may find them more approachable than some other kid-centric shows. Many parents grew up playing video games, so streams can act as conversation starters about the titles parents used to enjoy. Being able to bond over classic titles such as “Super Mario Bros.” and “The Legend of Zelda” can be a rewarding experience for families and can help give parents a window into what their children are creating today in their own game worlds.

Video game programming has always been a part of Kidoodle.TV, but the company didn’t expect to expand things quite this quickly. The past 18 months have hastened the company’s plans as games became an even more important part of kids’ free time during the pandemic.

“We believe in keeping kids safe,” says Bisner. “Kids were gravitating toward gaming before and of course during the pandemic, and it was a chance to further develop the roster to make our offering the go to destination for kids and families. It’s always been a part of the plan. COVID and us being a trusted destination accelerated everything. It’s been nonstop since March 2020.”