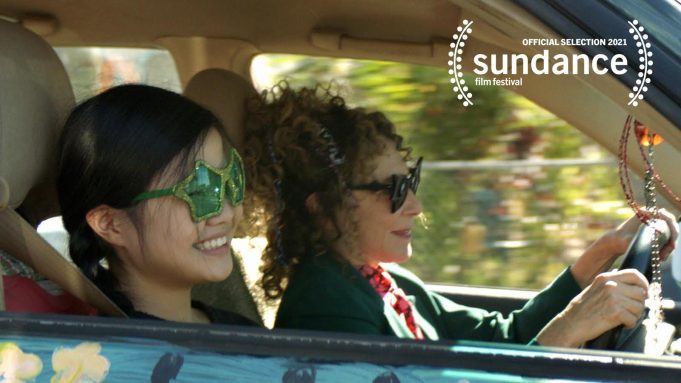 If the Sundance Film Festival loves a success story, the fest is likely to fall head over heels for director Kate Tsang.

Her coming-of-age adventure “Marvelous and the Black Hole,” which premieres Jan. 31 at this year’s festival, is not only her first feature as a director, it’s a rarity: a feature produced, directed, written, designed by and starring Asian American women.

Tsang’s tale of grief and reconciliation follows a troubled Asian American teen (Miya Cech) who bonds with a kids’ party magician (Rhea Perlman). Tsang says her movie shows “the power of channeling pain and anger into something beautiful.”

But while Tsang is already an Emmy-nominated writer, “Marvelous and the Black Hole” is not the kind of story that easily finds financing. She needed a leg up to get the film made and distributed.

Untold Stories, a partnership between AT&T and the Tribeca Film Festival, gave her the chance to earn that help.

The Untold Stories program provides filmmakers from underrepresented communities with funding, mentorship and distribution. The program provides a $1 million grant for making a feature. If Tsang could win the competition, she could make her film.

“We recognize the power of film and its undeniable ability to create connections through storytelling and representation,” says Shiz Suzuki, assistant vice president of sponsorships and experiential marketing for AT&T. “Our goal is to take the ‘untold’ out of Untold Stories. We provide the microphone — the platform and scale — and the filmmakers provide the stories.”

While Tsang had previously directed short films and written for the hit “Adventure Time: Distant Lands” specials on HBO Max as well as the Emmy-nominated Cartoon Network series, “Steven Universe Future,” none of her own feature scripts had been produced. Representation for Asian American women in feature films is scant, she observed.

“I never saw anyone [in films] that looked or sounded like me as the lead,” she says.

Untold Stories requires a production-ready script, and Tsang had “Marvelous and the Black Hole” ready to go into production in time for summer 2019 requirements. “I wrote it to be a heartfelt and joyful celebration of resilience and the connections we forge with unlikely friends,” says Tsang. In addition, the program focuses on first- and second-time feature directors; Tsang fit the bill.

Tsang teamed up with producer Carolyn Mao, who knew of Tsang’s award-winning 2014 short, “So You’ve Grown Attached.” Mao says, “I was drawn to Kate’s work because I loved her imagination, heart and humor while not being afraid to confront darker themes.”

The team lined up cast, crew and locations so they could move quickly if they won. Tsang cast 13-year-old, Japanese-born model-actress Cech as Sammy Ko, the rogue teen who finds a mentor in “Cheers” alum Perlman’s unconventional magician, Margot. Other Asian Americans in the cast include Cech’s younger sister, Kai Cech, and experienced actor Jae Suh Park in a supporting role.

After applicants submit their scripts, and TFF culls the pool to about 15-20 screenplays. From there, a selection committee pulls five finalists; the writers then live-pitch to a TFF panel of industry luminaries.

“This pitch event is the jewel moment for the program,” says Suzuki. “[It] is broadcast live across various social media channels to maximize exposure and to provide a platform for the filmmakers.” Though all the finalists get at least $10,000, Tsang needed to win the competition to get her film made.

Tsang and Mao assembled a polished, lively 10-minute presentation for the judges. Onstage, Mao told the live-pitch audience that they planned to shoot in August in Los Angeles over approximately 20 days. Tsang added interest to the pitch by performing a simple sleight of hand magic tricks with paper, string and a pair of scissors stashed in her jean-jacket pocket.

“It was clear ‘Marvelous and the Black Hole’ told a unique and captivating story from an underrepresented voice, which is exactly the aim of the program,” says Suzuki. Sure enough, Tsang and Mao won the competition. “My goal by the end of [production] is to learn one magic trick,” joked Mao after they were declared the victors.

Winning the award, says Tsang, gave her team a “reason to push ourselves and do something scary.” They swiftly set to work. TFF helped them develop the final budget and they shot that summer.

Once production wrapped, Untold Stories’ distribution component kicked in. Over a five-year term, according to competition rules, AT&T has the right to shop the film to WarnerMedia platforms for exclusive distribution. The filmmakers will receive back-end participation and can look for other distributors should WarnerMedia choose not to license the picture.

But distribution became a new challenge when the pandemic restricted attendance at movie theaters and TFF postponed the 2020 festival, where the film was to have had its theatrical premiere. Instead, it will make its debut via the online Sundance Film Festival on Jan. 31 at 9 a.m. PST/noon EST, followed by a virtual Q&A. A second screening will be on Feb. 2 at 7 a.m. PST/10 a.m. EST. Tickets to both screenings are available via this link.

“Kate Tsang and the genre-defying ‘Marvelous and the Black Hole’ offer a fun take on what are otherwise dark or surprising life moments,” says Suzuki. “It is as unique as it is relatable and we think audiences will really connect with it.”

Tsang is just the third Untold Stories winner, joining duo Sasie Sealy and Banban Cheng (“Lucky Grandma”) and Faraday Okoro (“Nigerian Prince”), which were distributed nationally for DIRECTV customers. Filmmakers who want to enter the next competition can apply now; the entry window runs through Feb. 22.

Says Suzuki, “Representation matters, and these filmmakers become the inspiration for the next generation of creators by helping drive the momentum of knowing that their stories will be shared and heard.”

Thanks to AT&T, TFF and, now, the Sundance Film Festival, Tsang’s fantastical coming-of-age story can be told at last.

“This is the film I wish I had growing up,” she says.