Barry Jenkins Honors the Legacy of His Ancestors in Moving Epic 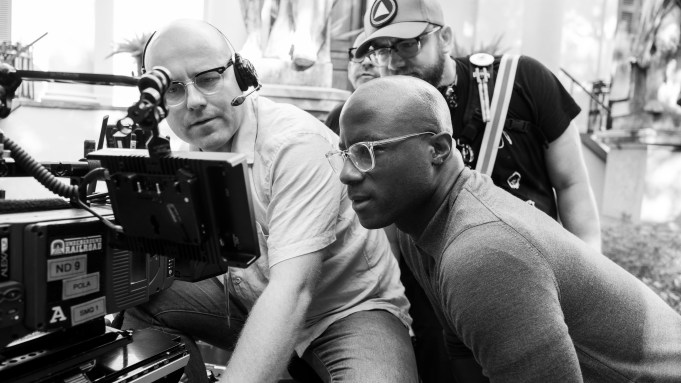 At a time of unprecedented interest in sorting out America’s tortured racial past, Amazon Prime Video’s “The Underground Railroad” offers a unique contribution to the conversation.

The adaptation of Colson Whitehead’s Pulitzer Prize-winning bestseller tells the saga of Cora, a runaway, and her dogged pursuer, bounty hunter Arnold Ridgeway, through a blend of uncompromising realism and otherworldly imagery. On the surface, the film’s pre-Civil War South comes right out of our collective memory. Luscious, sun-kissed greenery bears witness to unspeakable horrors visited on a captive people.

Yet in this telling, the escape offered by the Railroad is a real subterranean train, —  complete with trackwork, engineers and conductors — and the story also weaves in anachronistic details like skyscrapers, elevators and modern clothes. Each stop along the line, in each new episode, is a startlingly different world for the viewer’s eyes and mind to explore.

As director-showrunner Barry Jenkins explains, in a video introduction to the 10-part epic, “I think in a way it’s a very radical approach to telling this kind of story … to recontextualize my ancestors, and place them back at the center.” Thuso Mbedu, who plays the leading role of Cora, calls the style “fantastical realism.” However, it’s described, one thing is certain: The television medium has rarely before seen its like.

Jenkins describes the core plot as “the story of an enslaved woman named Cora, who has been abandoned by the only family she knows in this world: her mother.” Pushed to the breaking point on a Georgia plantation, she joins Caesar (Aaron Pierre) in a bold flight to freedom, which goes awry when she’s forced to kill a white boy in self-defense. That act seals her fate: She will always be barely a step ahead of her implacable pursuer Ridgeway (Joel Edgerton), who won’t rest until he brings her to what his system of bondage calls justice.

“Barry doesn’t shy away from the darkness,” says Edgerton of his director. “He doesn’t shy away from the violence. But he gives you something more.” That “something more” is a perspective on the past that insists we view it through a modern lens. In many moments throughout the series, without a word of dialogue, “The Underground Railroad” forces us to wipe away 150 years of these stories being removed from the historical context and directly confront our nation’s shame.

The viewer is constantly startled in other ways, as elements of the 19th century, the 20th century and fantasy are unexpectedly juxtaposed. Cora falls to the train tracks in slow motion, like Alice down the rabbit hole. Cloistered away in an attic while slave catchers search house to house, Cora can’t help but make us think of Anne Frank and so many other real-life heroes whose survival depended on a stranger’s kindness — and on luck.

Through it all is the sheer artistry that permeates every frame. Working with James Laxton, the cinematographer who collaborated in the ravishing visual styles of “Moonlight” (2017’s Academy Award-winning Best Picture) and “If Beale Street Could Talk,” Jenkins leans into the flora and fauna of the South, “one of the most verdant, fertile regions of the country,” as he puts it. “To be honest, I think not degrading the pictorial beauty of the setting makes it even more horrific.” It makes for a “balancing act, the tension between hard and soft images, the need to tell the truth without being devoured by the barbarity of that truth.” It is a means of simultaneously revealing, and transcending, the pain of slavery.

And transcendence is the operative word. “The Underground Railroad” carries optimism, not just anguish, in its baggage car. In Edgerton’s words, “Yes, you’re going through an incredibly painful experience, watching the suffering and the subjugation and the injustice. And yet, on the other side of it, humanity always ekes through. The goodness of people always finds its way to shine a different light.”

Beams of light are in fact a constant visual motif in the series, from the lantern guiding terrified passengers into forbidding tunnels, to the shaft of sun coming through the knothole that is captive Cora’s one access to the world outside her attic. Jenkins never wants us to forget that as dismal as our history may be, we have it in our power to shape what’s ahead into something very different.

“In telling a story that’s set so far in the past, but is still so very relevant to what we’ve just gone through in this year,” says Jenkins, “I hope it will, for the audience, remind them that these conversations need to continue to happen. And I really do hope that. Because I think this show is ultimately joyous and hopeful in the end … an image of what could be.”

View the video introduction to “The Underground Railroad” above.