The iconic brand marked its fourth year as the festival’s official beauty sponsor with a chic rooftop dinner at the iconic Hotel Danieli. 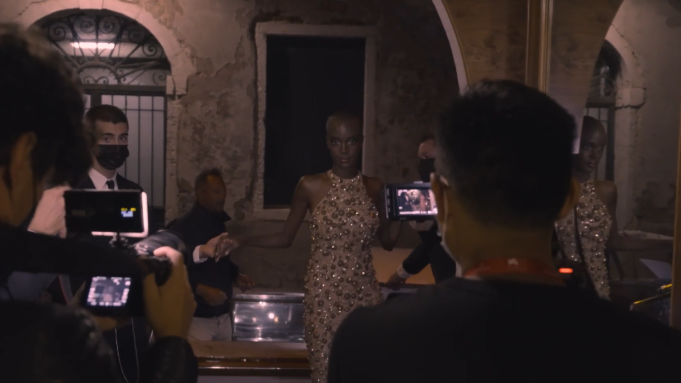 Actors, models and other notable guests joined together to raise a toast to cinema at this year’s Armani Beauty dinner, held on Sept. 4 at the Hotel Danieli during the 78th Venice Film Festival. As the official beauty sponsor, Armani Beauty celebrated its partnership with the annual Italian film fest and announced a new award to be bestowed upon a winning film during the festival’s closing ceremony.

The Armani Beauty Audience Award, Orizzonti Extra — to be presented to a film that exemplifies new cinematic trends and rising talent — will be voted on by a jury of spectators who will select a winner from the festival’s Orizzonti Extra section.

After launching a partnership in 2018, Armani Beauty upped its support of the Venice Film Festival the following year, signing on as the main sponsor from 2019 through at least 2023. In this role, Armani Beauty keeps red carpet glamour shining, making sure the photo ops pop and the famous faces gleam, all while looking for new ways to leave a mark.

“Everybody looks so incredible,” said actor Lexi Underwood. “It’s an honor to be here, and I feel incredibly grateful to be in this space. I have my mom here with me, so what better company to experience this for the first time?”

The Underwood clan raised a cheer with actors Nicholas Hoult and Roberta Armani when they hit the historic hotel’s rooftop, where they joined Rian, who marveled at the “love and excitement” on hand while taking in the iconic Grand Canal views.

Echoing the sentiment, Palvin jumped in, “The Venice Film Fest is so glamorous. And when you think about Armani, you think about femininity and powerful women.” The model added that the partnership between the two is an ideal match: “Because it’s powerful, it’s beautiful and it’s glam.”

Perched at the hotel’s exclusive Sala Ducale, attendees were offered a haven of intimacy where they could sip champagne between bites of crudo di pesce, reconnecting with one another while standards rang off a baby grand. Soon they swapped the drawing room’s old-world luxury to dine al fresco. Seated outdoors on a late-summer night, lit by the moon and a long line of candles dotting a sprawling table, guests enjoyed a three-course menu of lobster penne, steamed sea bass and lemon sorbet while buzzing over the shared passion for film that brought them all there.

“I just watched an amazing movie in my native language [Spanish], and that to me was very special,” said actor Adria Arjona, who is the face of the brand’s first carbon neutral fragrance Armani My Way. “Seeing movies from all over the world and supporting the festival that is giving them a platform to shine is very Armani.”

For the occasion, Arjona sported a strapless red gown from the Giorgio Armani Privé (Fall 2014) collection, further amplifying Armani’s efforts for sustainability and underscoring the timeless elegance of the piece itself.

Basking in the excitement of the night, Arjona continued, “I think fashion and beauty are a sense of expression. We all need beauty, so celebrating that is important as well.”