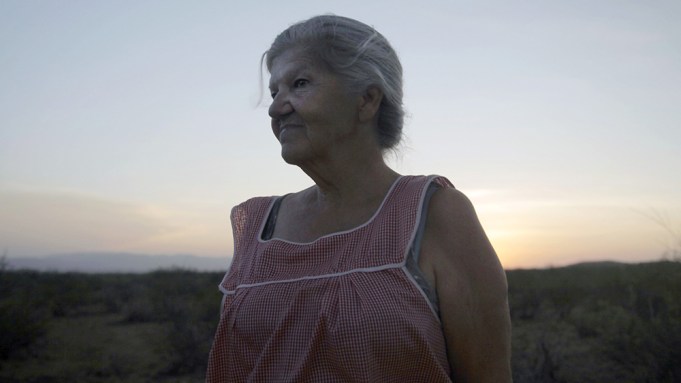 Linda May and Swankie, two of the featured performers in “Nomadland,” are attending the Oscars. The two nonprofessional actors are the plus-ones of Chloé Zhao (nominated for four Academy Awards) and the movie’s nominated cinematographer, Joshua James Richards (who is also Zhao’s partner). “Nomadland,” based on Jessica Bruder’s 2017 nonfiction book of the same name, hired some of the real people Bruder had interviewed during her reporting journey, including May, Swankie, van-dwelling guru Bob Wells and many others.

In an interview with Variety, during which she was at a Walmart preparing for her trip to Los Angeles, May talked about her experience making “Nomadland” — and the idea of going to the Academy Awards.

“I can’t believe it!” May exclaimed. “I got the schedule yesterday.”

She continued with a gush. “And Josh — I get to ride to the Oscars with Josh. I love Josh, and I flirted with him like crazy the whole time we made the movie. Chloé said I could have him. And so I’m really happy to get ride with Josh!”

“Nomadland” heads into the Oscars as a favorite in several major categories, including picture and director. The movie — written by Zhao, who also directed, edited, and produced the film — premiered at the September festivals, and has been on a prize-winning run since.

For May’s part, she said Bruder introduced her to Zhao at the beginning of her screenwriting process, and Zhao visited her on the land May had bought in Douglas, Ariz., thinking she might settle down there. When Zhao came to Douglas, May said, there were a few other nomads spending time with her there: “The other ladies and Chloe and I set up a place to sit, and told stories, and talked for a few hours.”

Swankie, whose full name is Charlene Swankie, was among them — but she hadn’t come over to meet Zhao.

“On her way out, she noticed Swankie over there. And Swankie’s a very interesting person,” May said. “So she stopped in to chat with her. Swankie was right in the middle of doing some construction work inside of her trailer that she tows around behind her van. And she said, ‘Who is this little girl? I wish she would go away! I am working!’”

“But she’s very glad that she didn’t go away, and things turned out the way they did.”

How things turned out is that Swankie and May were written into Zhao’s screenplay, and were hired to play themselves. “She told a wonderful story about the nomads,” May said about “Nomadland.”

In the film, Swankie has terminal cancer, and drives to Alaska to kill herself, rather than die in a hospital. But Oscar viewers will see that’s she’s alive and well.

May knew going into “Nomadland” who Frances McDormand was, the movie’s producer and star. “Of course, I have been such a big fan of hers!” In the movie, McDormand’s Fern — whose entire town has disappeared after the local factory shuts down — is new to nomad life, and Linda May is her friend and guide. They filmed one emotional scene, when Linda tells Fern about a time when she was in suicidal despair, in her trailer. Before turning the camera on, Zhao prompted May, asking her to tell that story.

“We were all crammed in that little bitty space. It turned out beautifully,” May said. “And I’m happy that we got to share that, because suicide is such a problem, and to show that you can live beyond that — that your weakest moment could be your biggest strength to share with another person.

“I didn’t do it. Look what happened! You know? I hope people get that.”

Readers of Bruder’s book learn how May ended up on the road after having a lifetime of jobs for which she’d accrued no savings — she ends up giving up her home and hitting the road in her 60s. She dreams of building an Earthship — a sustainable house — and the book ends with her having bought the land in Douglas.

The nonprofessional actors of “Nomadland” were all paid to be in the movie. “They told me that I needed to join SAG, and they assisted me with that,” May said. “And told me what the daily rate was going to be — I about fainted.” She stopped to laugh: “That was a big surprise.”

Since Douglas proved to be less habitable than she’d hoped, May instead bought land in Taos, New Mexico — and has jettisoned the idea of the Earthship. “It’s a little late in the day for me to start a project like that,” she said. “It would take two to three years to build an Earthship, and I have decided a little cabin will be good enough. I don’t have to push out all that energy, and not have much time left to enjoy it.”

“When the fires were in Oregon last summer, my daughter’s house was threatened. And she called me and said, ‘Mom, if my house burns down, can I come and stay with you?’”

May became too choked up to talk, and apologized. After a moment, she gathered herself.

“So yeah, that changed my life,” she continued. “Before, I wouldn’t have had anything. I would have had a little 13-foot trailer, and I don’t know how you can squeeze a family of six in there.

“Now, I have five acres! I have plenty of room.”