Can the drama about the aftermath of a school shooting receive Oscar attention? 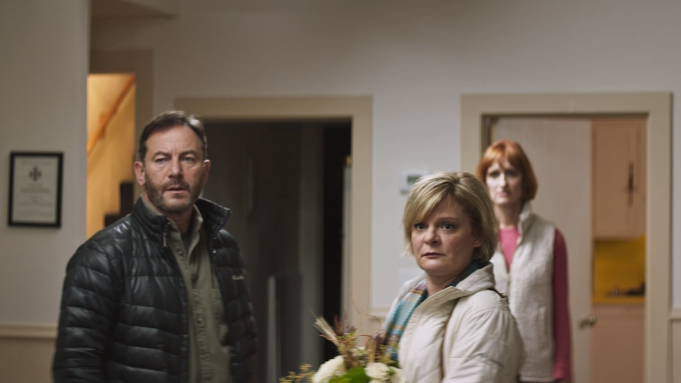 The strikingly moving and sensationally acted “Mass,” with Reed Birney, Ann Dowd, Jason Isaacs and Martha Plimpton, is ready to take on the upcoming awards season.

The Sundance Film Festival hit will be released exclusively in theaters on Oct. 8, 2021, Variety has learned exclusively. In addition, all four actors will be campaigned in the supporting actor and supporting actress categories for the Oscars.

“Mass” tells the story of an unspeakable tragedy in which two sets of parents are brought together following a school shooting. A true ensemble, the movie brings together the acting forces of four of Hollywood’s most gifted actors. “It’s four of the best performances you’ll ever see,” says writer, director and producer Fran Kranz in an exclusive interview with Variety.

The four actors could all be competitive in the densely packed awards season. With possible double acting nods, “Mass” could follow in the footsteps of “The Favourite” (Emma Stone and Rachel Weisz), “The Fighter” (Amy Adams and winner Melissa Leo) and “Doubt” (Adams and Viola Davis), getting nominations for Emmy winners Ann Dowd and Martha Plimpton.

Dowd has been a character actress for over 30 years, delivering memorable yet brief turns in classics such as “Philadelphia” (1993) and “Garden State” (2004). Her first dip into the Oscar game came in 2012 when she received critical acclaim as the manager of a fast-food restaurant who gets duped in performing an unlawful and intrusive procedure on her employee in Craig Zobel’s “Compliance.” Self-funding her awards campaign, she won supporting actress from the National Board of Review and received a nom from the Critics Choice Association. As Linda, one of the mothers in the tragedy, she’s afforded all the Oscar beats that the voters love to reward. Dowd won her first Emmy in 2017 for supporting actress drama as the brutal Aunt Lydia in Hulu’s “The Handmaid’s Tale” and stands an excellent chance at receiving another nomination this year for her work.

The same goes for her co-star Plimpton, who is resourcefully charged as Gail. In the last decade, she’s leaned more toward television than film, winning her first Emmy in 2012 for guest actress in a drama for “The Good Wife” as Patti Nyholm. A staple in the late ’80s and early ’90s cinema with turns in “The Mosquito Coast” (1986), “Running on Empty” (1988) and “Parenthood” (1989), Plimpton delivers her best performance of her career, having her responses and reserved nature carry the character throughout the film. A quiet storm of emotion, all leading to an invigorating finale in which she and Dowd shine brightly.

Don’t sleep on the men for awards attention, as Isaacs, best known for playing Lucius Malfoy in the “Harry Potter” franchise, gives a deep, emotionally nuanced performance, infused with vibrant life. Possible to emulate past Oscar nominees like Clive Owen (“Closer”) or Tom Wilkinson (“Michael Clayton”), who received their flowers in big acting exhibitions, the purity of his turn could get tons of accolades from the regional critics when precursors begin in the latter part of the year.

For Birney, most known for playing Donald Blythe on Netflix’s “House of Cards,” his role has all the ingredients for a contender; however, it may lack the likability factor that the other three characters have to be difficult for some to navigate. Look at past snubbed thespians such as last year’s Frank Langella in “The Trial of the Chicago 7” for an example. It’s important to add that the double-dipping for men in supporting actors don’t occur as often, although three of the last four years have shown a new trend.

There have been 28 films in Oscar history that have received four acting nominations, but only one has received them solely in the supporting categories. “The Last Picture Show” (1971,) from co-writer and director Peter Bogdanovich, was nominated for eight Oscars, including best picture. It won two for actors Ben Johnson and Cloris Leachman. “Mass” will need widespread support throughout the Academy’s branches to achieve this feat.

For Kranz, playing triple duty is always tricky to navigate, and shooting the film on a minimal budget in 14 days in Idaho is well worth the acclaim. Making his debut after working with the likes of Drew Goddard (“The Cabin in the Woods”) and Joss Whedon (“Much Ado About Nothing”), the first-time filmmaker’s connection to the story is evident, writing it following the Parkland shootings when his child was just over a year old. Never taking any easy approach to showing graphic imagery, Kranz focuses on dialogue and the feelings in the room, which is incredibly difficult since nearly the entire movie takes place in one room in real-time. It could put him in the running for an original screenplay mention, but I would expect to see him among the first-time directors’ category at the DGA awards. The hurdle will be getting voters to give the film its fair shake and watch it. With the first year returning to a guaranteed 10 nominees and DVD screeners and physical scripts no longer permitted for Academy voters, that may have evened the playing field some. Still, robust responses from general audiences would certainly help.

This year Bleecker Street has already released “Together Together,” with Ed Helms and Patti Harrison and “Dream Horse” with Toni Collette and Damian Lewis. Their upcoming slate also includes the documentary “The Loneliest Whale” and “I’m Your Man” with Maren Eggert and Dan Stevens, which debuted in Berlin.

In addition to Kranz, the film is also produced by Casey Wilder Mott, JP Ouellette and Mylan Matlock.