Spike Lee on the Stories Behind His Favorite Opening Credit Sequences, From ‘Do the Right Thing’ to ‘Jungle Fever’ 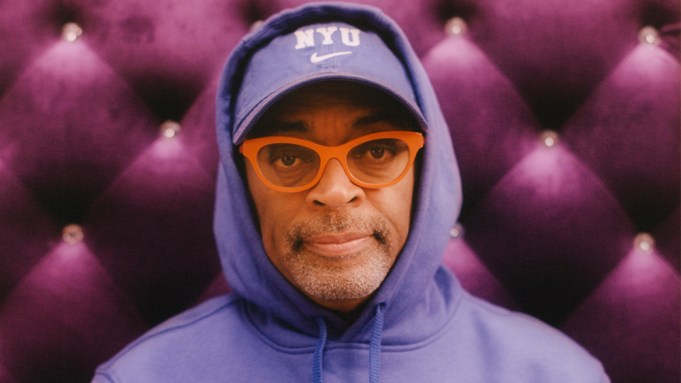 Filmmaker Spike Lee has nearly 100 credits to his name. From documentaries to movies to short films (“don’t call them music videos”), Lee has covered it all.

And through his films, he tackles issues of race, class, and history. Lee who started as an independent filmmaker burst onto the scene with 1986’s “She’s Gotta Have It” and in 1988 he made his first studio film, “School Daze.” From the get-go, Lee’s arresting opening credit sequences have become a signature. It’s a sign that audiences can expect a funny, provocative ride, one usually set to some killer music. In other words, a typical Spike Lee Joint.

Four African American veterans return to Vietnam to recover the body of their leader and the gold they hid.

“Da 5 Bloods” opens with a speech delivered by Muhammad Ali in Chicago in 1978, intercut with footage and stills from the Vietnam War, Neil Armstrong’s moonwalk, and Civil Rights icons such as Malcolm X and Angela Davis.

Lee: It’s about getting the audience in tune and letting them know that these events were happening when there was a revolution going on in America with the Civil Rights Movement and the Anti-war movement.

I was ten years old, and I was watching this on TV. At the Lee dinner table, news events were discussed.

I think it’s educational because I know from experience –but there’s a large population of young people, and I’m not blasting them — but the world didn’t start until they were born.

For the older generation, [those scenes] it’s a reminder of the stuff that they grew up in.

In Lee’s first film, Tracy Camilla Johns stars as Nola Darling, a sexually confident woman juggling three suitors. “She’s Gotta Have It” was a family affair as Lee’s father, Bill appears in the film as Nola’s father, and contributed to the film’s score. In the opening, David Lee (Spike’s brother) provides black-and-white photographs of Brooklyn life.

Lee: Ernest Dickerson shot all my films right up to “Malcolm X.” Ernest and Ang Lee were all in the same class at New York University Film School, class of ’82.

Randall Balsmeyer did the visuals and the lettering. “She’s Gotta Have It” was shot in 12 days. From July 1 to July 14 in the summer of ’85.

My brother David Lee is a unit photographer. That was the first time we started using pictures. That montage is photographs of pre-gentrified Forte Greene and Bed-Stuy [in Brooklyn] (Bedford–Stuyvesant) “do or die.”

My father scored that, he also did “School Daze” and “Mo Better Blues.” After that, Terence Blanchard took over.

Lee’s 1989 film focuses on racial tensions in Brooklyn on one unbearably hot summer day. Danny Aiello plays Sal, the pizzeria owner who decors his walls with photos of Robert De Niro, Al Pacino and Joe DiMaggio. Giancarlo Esposito plays Buggin’ Out, who walks in one day to ask, “Why aren’t there any brothers on the wall?” Rosie Perez who stars as Tina appears in perhaps Lee’s most iconic opening ever, as she dances to Public Enemy’s “Fight the Power.”

Lee: At certain times, there are two tracks of Branford Marsalis playing the saxophone. The very beginning is “Lift Every Voice and Sing” our anthem, and then it cuts into “Fight the Power” by Public Enemy, which is one of the greatest protest songs ever.

Michael Jackson did the opening credit song for “Get on the Bus,” and that was written by Babyface. I never got the story of how Michael and Babyface got together. I don’t know if the song was written for the movie. The fact remains, we got it. “Get on the Bus” opens with imagery and slave chains and the horror of slavery.

My mother was a cinephile. My mother took me to see The Radio City Music Hall Easter Sunday show and a movie. The movie was “Bye Bye Birdie.” The opening credits of the song is Ann Margaret singing and dancing to the title song.

That came out in ’63 and I was six years old. It wasn’t until a year after “Do the Right Thing” that Rosie Perez dancing came from Ann Margaret dancing. That was locked in the back of – as my mother would say “Peehead.”

Amazingly, I saw that and it was the inspiration for the opening number to “Do the Right Thing.”

Rosie Perez dancing. People were not ready for the opening of that film. That opening is a part of cinematic history.

Lee returns to the montage opening sequence, threading the Civil Rights Movement to college life. The lettering is in burgundy varsity font, a nod to the style favored by institutions of higher learning. The film is set at the fictional Mission College where Lee examined the conflicts and tensions between Black college students.

Lee: The opening of “Get on the Bus” is a reimagining of “School Daze.” That film had the great Morehouse College Glee Club singing the Negro spiritual “I’m Building Me a Home.”

That is history. I wouldn’t even say African American History, it is a history of America because we built this motherfucker, along with the genocide of Native people and the stealing of land, that’s the foundation of the United States of America.

So, the opening credit sequence of “School Daze” is a visual history from the slave ships to Jackie Rouse and Willie Mays. They are the people who have made a great impact on the world.

A three-hour epic about Malcolm X, the Nation of Islam leader and activist, was one of Lee’s most ambitious films. In the opening, Denzel Washington reads Malcolm X’s speeches as video of Rodney King being assaulted by the police plays.

Lee: Three things are happening here: Denzel is giving one of Malcolm’s speeches word for word. You have the horrific beating of Rodney King, but what brings it together is Terence Blanchard’s cue for that with the trumpet. People were not ready for that. Especially when Denzel says, “I charged the white man” and goes down the litany.

We framed the burnt American frame on my wall, here in the office at the world headquarters of Four Acres and Mule in Fort Greene, the People’s Republic of Brooklyn, New York.

Lee sets the scene, plunging viewers into post-9/11 America. Edward Norton plays Monty Brogan, a convicted drug dealer who is about to go to prison for his crimes.

Lee:The novel is written by David Benioff, Mr. “Game of Thrones, and it was written before 9/11. Edward Norton and I said we needed to make this a post 9/11 film. Not so much that’s a story, but it’s the backdrop of a wounded New York City, grieving but coming together as New Yorkers.

There was a tribute called the tower of lights where two lights were shot up into the sky as a representation of the two towers that fell. We were in pre-production for “25th Hour” and I thought it was going to run forever, and I read the paper. I saw there were two days left.We had to scramble.

It was shot by wonderful DP Rodrigo Pietro. Powerful imagery. Again, it was supported by a great cue by Terence Blanchard. Very sober, sad and there’s a vocalization on that track.

Lee’s documentary recounts the 1963 bombing of the 16th Street Baptist Church in Birmingham, Alabama, a shocking act of violence that killed four Black girls: Addie May Collins, Carol Denise McNair, Cynthia Wesley, and Carole Rosamond Robertson. Lee uses interviews, home movies and photos to share an image of what could have been had these children lived.

Lee: One of my favorites is the opening credit sequence for “Four Little Girls” where Joan Baez is singing with her beautiful voice. Just Joan and her guitar.

J. Edgar Hoover was not a friend to Dr. King, to Malcolm or any Black person who was trying to enlighten not just Black people, but the world. The FBI knew within a week [of the murders] who these guys were, but they didn’t do anything. One of the nicknames of the murderers was called Dynamite Bob. The FBI are f—— idiots. The motherf—–’s name is Dynamite Bob and you can’t put two and two together?

Here’s the reason why this film was very important to me. Up to that point, even though there had been a trial, they were never sent to prison.
Now, to qualify for the Academy Awards your film has to run for a week in New York and a week in LA. So, we opened.

That week, I got a call from the FBI. I thought, ‘Why is the FBI calling me?’ They wanted a print of the film, and right after the film opened, the FBI reopened the case. That tops anything I’ve ever done.

They called me. It was never my intention or the agenda. I wanted to interview the parents, relatives and friends of these beautiful Black girls who were blown apart by dynamite.

By doing these interviews with these witnesses, they would tell us, if they had been allowed to live, what beautiful, intelligent, American citizens they could have been.

Denzel Washington stars in this story of loyalty, friendship and honesty set in the jazz world.

Lee: You can’t leave out “Mo Better Blues” because the mo better makes it mo better. The inspiration for that opening was jazz album covers. Simple as that. The music was written by my father, Bill Lee.

An interracial love affair between Flipper (Wesley Snipes) and Angie (Annabella Sciorra) serves as the springboard for an examination of explicit racism, race, class, family and neighborhood divide.

Lee: I love me some Stevie Wonder. I went to Stevie and said, ‘Stevie, I have this film and I want it to be your next album.’ He said, ‘Okay.’ Everybody in the world and their mother told me Stevie would not be able to do it in time. Stevie came through.

This film was dedicated to Yusuf Hawkins who was murdered in Bensonhurst. We have maps that go back and forth between the two neighborhoods.

[It is] one of my all-time sequences in all my joints where I pick a song that goes with the imagery.

Do me a favor, go out and watch “Jungle Fever.”

I have always loved the opening credits of James Bond movies, 007.

When I was a kid, I wasn’t thinking I’d be a filmmaker. I recognized something was special about the opening credits of the James Bond films.

My mother was taking me to movies, Broadway plays and libraries. When I became a filmmaker, those influences came out. I know for sure it was my mother exposing me to a lot of stuff. She wasn’t doing it thinking I was going to be a filmmaker. She just wanted her children to be well-rounded. And that’s the truth, Ruth.

“Goldfinger,” [is my favorite. I mean the Shirley Bassey song. People would get to the theater early because they don’t want to miss the opening credit sequence.