SAG Awards Set Stage for Most Diverse Oscars Winners Ever

Chadwick Boseman, Viola Davis, Daniel Kaluuya and Yuh-Jung Youn could be the Oscar-winning quartet everyone can celebrate. 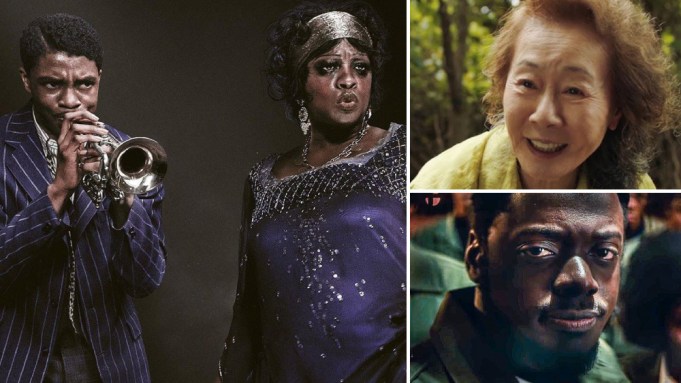 The SAG Awards have weighed in with their winners and have set in motion on what could be the most diverse slate of major Oscar winners in the 93-year history of the Academy Awards.

The celebration of the 27th annual ceremony, which is voted on by the approximate 160,000-person membership of actors, was revealed during the one-hour pre-taped show via Zoom on Sunday night.

Aaron Sorkin’s “The Trial of the Chicago 7” took the top prize of the evening for cast ensemble, marking its first major win of the awards season. In the acting categories, “Ma Rainey’s Black Bottom” stars Chadwick Boseman and Viola Davis won the leading male and female actor categories. Daniel Kaluuya (“Judas and the Black Messiah”) and Yuh-Jung Youn (“Minari”) landed the male and female supporting statues.

It marked the first time in SAG history that all four film acting categories went to actors of color.

Boseman’s posthumous win was a first in any leading category at the SAG awards, putting him one step closer towards Oscar. In addition to winning Critics Choice and the Golden Globe, next week’s BAFTAs could further solidify his frontrunner status, even if Anthony Hopkins (“The Father”) has the home field advantage across the pond. If Boseman does win the BAFTA, you have to go back to 2002, when Russell Crowe (“A Beautiful Mind”) lost the Oscar to Denzel Washington (“Training Day”), for a nominee to lose after taking home so many precursors. Coincidentally, that was also the year that Halle Berry (“Monster’s Ball”) became the first and (still only) Black woman to win the lead actress category, which brings us to the enigma that is best actress 2021.

Davis’ win from SAG, her third individual overall for movie performances, makes her the fourth individual actress winner from the televised award shows, an unprecedented occurrence for lead actress in 27 years. The Globes went with Andra Day (“The United States vs. Billie Holiday”) in drama and Rosamund Pike (“I Care A Lot”) in comedy while Carey Mulligan (“Promising Young Woman”) picked up the Critics Choice Award.

However, when it comes to winning both actor and actress at the Oscars, it’s no easy feat. The last time that happened was 23 years ago, in 1998, when Jack Nicholson and Helen Hunt both triumphed for “As Good As It Gets,” a movie that was also nominated for best picture. “Ma Rainey’s Black Bottom” is not.

And the BAFTAs won’t make things any clearer. The only best actress Oscars nominees in the running for that prize are Vanessa Kirby (“Pieces of a Woman”) and Frances McDormand (“Nomadland”).

For Kaluuya, his win was expected, and along with Boseman, seems to be the only sure-fire bets in the major categories at the Academy. And just like Boseman, if Kaluuya wins BAFTA, where his closest competitor Sacha Baron Cohen (“The Trial of the Chicago 7”) is not nominated, no supporting actor has lost the Oscar when walking in with BAFTA, Critics Choice, Golden Globe and SAG.

For best supporting actress, Youn might have moved ahead as the frontrunner of that category. With “Minari” landing six nominations, she can serve as a winner to represent the film, and more importantly, she’ll be just the second female Asian acting winner in history following Miyoshi Umeki in “Sayonara” (1957). It’s not all sewn up for the critics’ darling, yet as Maria Bakalova (“Borat Subsequent Moviefilm”) is still a factor to consider. Picking up a win from Critics Choice, the two will face-off one last time at BAFTA, where none of their other supporting actress rivals are nominated. It’s safe to say, whoever wins at BAFTA, most likely wins at the Oscars.

With assessing the SAG winners, and their translation to Oscar winners, in 27 years, they’ve matched seven times, averaging three in a given year. It would be safe to assume someone will come up short, but who, and in which category?

The 2001 awards year is the only time two Black actors won the leading statuettes at the Oscars. Denzel Washington (“Training Day”) pulled off a stunning upset over Russell Crowe (“A Beautiful Mind”) and Halle Berry (“Monster’s Ball”) was also the first Black actress to win the category. Without a BAFTA or a SAG nom and the sole representation for her film at the Oscars, Day has the toughest mountain to climb. No leading performance has ever won the Oscar without BAFTA and SAG in the modern era. In fact, only three actors have ever won without the two bodies: Marcia Gay Harden in “Pollock” (2001), Christoph Waltz in “Django Unchained” (2012) and Regina King in “If Beale Street Could Talk” (2018) in the last 20 years of actress winners. Only Charlize Theron (“Monster”) and Julianne Moore (“Still Alice”) have been the sole nominees for their films, sweeping their respective awards seasons.

You have to wonder, are enough voters going to take the time to watch Day’s film before Oscar night, particularly in the artisan races where about 63% of the voters are? Davis’ film is on track to win four of its five nominations (actor, actress, costumes and makeup). Does it become a “down-the-line” ballot type of vote? Also, could “Ma Rainey” be the most awarded film of the night? No non-best picture nominated film has led the wins solely, in the history of the Academy?

While this year’s Oscar nominees presented the most diverse in history, are we headed for an all-acting lineup of actors of color? If Zhao wins director and her film taking picture, that’s a scenario that 10 years ago wouldn’t have even been imagined.