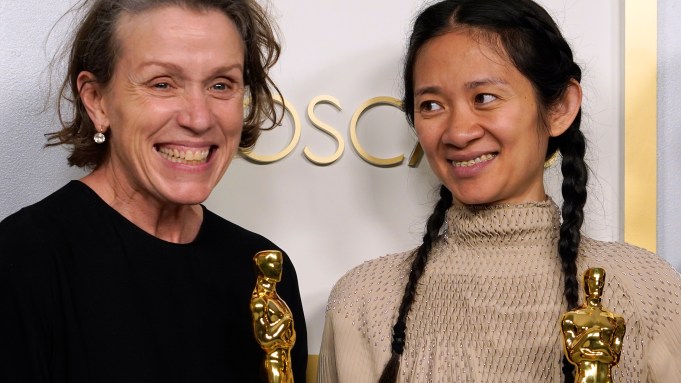 It was an Oscar night to remember, but perhaps not in the way that all of us would have expected.

In this special Awards Circuit Podcast Roundtable Mega Edition, Clayton Davis, Jenelle Riley, Jazz Tangcay and Michael Schneider give one last look at the highs, lows, surprises and jaw-dropping moments from the 93rd Oscars. The panel discusses “Nomadland’s” big wins and the shocking end that resulted in best actress and actor being handed out after the coveted best picture prize. Listen below!

83-year-old Anthony Hopkins became the oldest winner in best actor history for his magnificent performance in Sony Pictures Classics’ “The Father.” While his potential win had been well-documented, it seemed as if the show’s producers thought Chadwick Boseman’s incredible turn in Netflix’s “Ma Rainey’s Black Bottom” was an assured win. Last year’s actor winner Joaquin Phoenix announced Hopkins as the winner, who was not present at the ceremony or any satellite hub locations, with the telecast abruptly ending.

Before that was another miscalculation, when the producers likely assumed that the best actress Oscar would be given to the second Black woman in history (following Halle Berry for “Monster’s Ball” in 2001). But the award went to Frances McDormand, who landed her third lead actress statue, this time for her work in Chloe Zhao’s “Nomadland” over the other presumed frontrunners Viola Davis (“Ma Rainey’s Black Bottom”) and Andra Day (“The United States vs. Billie Holiday”).

If they had been following Variety’s awards predictions all season, they would have known that the lead women had the most competitive and unpredictable season of any category, with a different woman winning at the televised award shows. Just as easy as they named McDormand, the Oscars might have awarded Vanessa Kirby (“Pieces of a Woman”) or Carey Mulligan (“Promising Young Woman”), who were deep in the conversation.

From an event perspective, the panel shares their thoughts on the ceremony’s somber affair devoid of laughs, film clips and the promise of a “movie” that the Academy touted for weeks leading to the night.

There were some good takeaways from Hollywood’s biggest night. The two supporting categories went to Daniel Kaluuya (“Judas and the Black Messiah”) and Yuh-Jung Youn (“Minari”).

Kaluuya gave a very moving speech, although he may have embarrassed his mother more than he intended. Kaluuya wound up referencing his mom having sex with his father and how it lead to his birth, much to her chagrin. Youn also garnered laughs for her historic win when she found herself starstruck by last year’s winner for best supporting actor, Brad Pitt (“Once Upon a Time in…Hollywood”). Many suspect, COVID restrictions aside, the audience was robbed of an on-screen kiss that would have broken the internet.

Variety’s “Awards Circuit” podcast, hosted by Clayton Davis, Jenelle Riley, Jazz Tangcay and Michael Schneider (who produces), is your one-stop listen for lively conversations about the best in film and television. Each week “Awards Circuit” features interviews with top film and TV talent and creatives; discussions and debates about awards races and industry headlines; and much, much more. Subscribe via Apple Podcasts, Stitcher, Spotify or anywhere you download podcasts. New episodes post every Thursday.