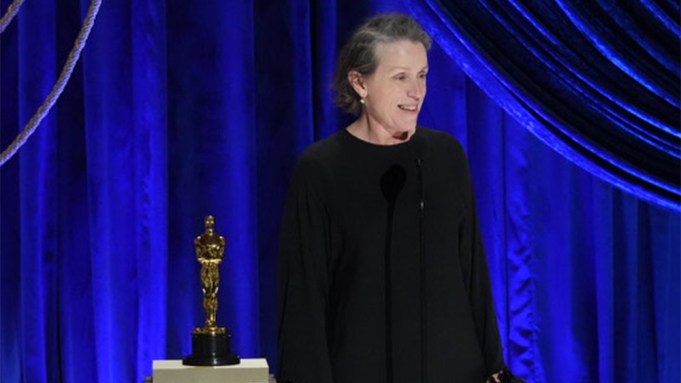 In an unconventional year, the Oscars delivered an unconventional ceremony, making history, and even rearranging the show so that the biggest prize of best picture wasn’t handed out last. This small tweak undid an aesthetically rich ceremony and made it into a jaw-dropping and ill-advised decision to end the evening on best actress and actor, which saw Frances McDormand win her third acting (and fourth overall after winning best picture) for “Nomadland,” and Anthony Hopkins winning his second Oscar for “The Father” over presumed frontrunner Chadwick Boseman for “Ma Rainey’s Black Bottom.”

I sounded the alarms early on that Hopkins and “The Father” were surging in the middle of final Oscars voting. To see it fully executed might have been easier for people to swallow if it hadn’t been tacked on to the end of the evening following what would have already been historic with “Nomadland” winning best picture and director. In the case of the latter award, they decided to have Zhao accept her prize as only the eighth award of the evening, before Yuh-Jung Youn and documentary short.

For the past few weeks, I’ve been sharing in multiple columns and news interviews that the Oscars were given a “get out jail free” card this year, due to the COVID-19 pandemic. It’s actually quite baffling how that carte blanche seemed to have been revoked in seconds following an envelope opening by Joaquin Phoenix and an abrupt cut to black similar to the finale of “The Sopranos.”

While the Oscars didn’t mirror the historical representation and diversity of the SAG awards, there were things well worth celebrating.

Chloe Zhao became the second woman to win for directing “Nomadland,” following Kathryn Bigelow for “The Hurt Locker” (2009). As the first woman of color, and first Asian woman, her win is historic with her film also picking up best picture. On a personal note, this also marks the first time in my career, where my “year-in-advance” predicted winners for picture and director came to pass. Another big surprise came in cinematography, where Erik Messerschmidt’s “Mank” upset Joshua James Richards’ “Nomadland,” mirroring its ASC win in the middle of Oscar voting.

The wide-open original song race went to songwriters D’Mile, H.E.R. and Tiara Thomas for the song “Fight for You” from “Judas and the Black Messiah.” Many expected either “Speak Now” from “One Night in Miami” or “Húsavík” from “Eurovision Song Contest: The Story of Fire Saga” to reign supreme; instead, the winning trio celebrates winning an Oscar and a Grammy the same year. Their song “I Can’t Breathe” won song of the year in February. To no one’s surprise, Daniel Kaluuya, who portrays Fred Hampton in “Judas,” won best supporting actor, making a clean sweep of all the televised award shows. He’s the seventh Black actor and first of Ugandan descent to win in 93 years.

We had first-time Black winners in some categories including makeup and hairstyling — with Mia Neal and Jamika Wilson (alongside Sergio Lopez-Rivera) winning for “Ma Rainey’s Black Bottom.” Trayon Free, (alongside his co-director Martin Desmond Roe) became the first Black winner for live action short for “Two Distant Strangers.” Jon Batiste became the second Black composer to ever win best original score for “Soul,” sharing his win with co-composers Trent Reznor and Atticus Ross who net their second win following “The Social Network” (2010).

Christopher Hampton and Florian Zeller picked up a trophy for Sony PIctures Classics’ “The Father” in adapted screenplay, repeating its BAFTA win, which many had dismissed (we didn’t). This marks Hampton’s third nomination and second Academy Award, previously winning for “Dangerous Liaisons” (1989). Zeller, who makes his directorial and screenwriting debut, is the third consecutive writer and director to win this award following Spike Lee (co-writer for “BlacKkKlansman”) and Taika Waititi (“Jojo Rabbit”).

History would have been made if two solo women screenwriters had won both screenplay categories, but it wasn’t to be this time around.

As can be expected, the shorts either make or break your Oscar pool. The documentary short category was given to the Holocaust film “Colette” over Kris Bowers’ moving ode to his grandfather, “A Concerto is a Conversation.”

Other winners were more predictable in this strange year. Amazon Studios’ “Sound of Metal” took home awards for editing and sound, while “Tenet” won visual effects. “Mank” added production design to its two-win tally while “Ma Rainey’s Black Bottom” also walked away with costume design for Ann Roth, the oldest woman to ever win an Oscar at 89.