Marvel Studios Exec Victoria Alonso to Be Honored by Outfest 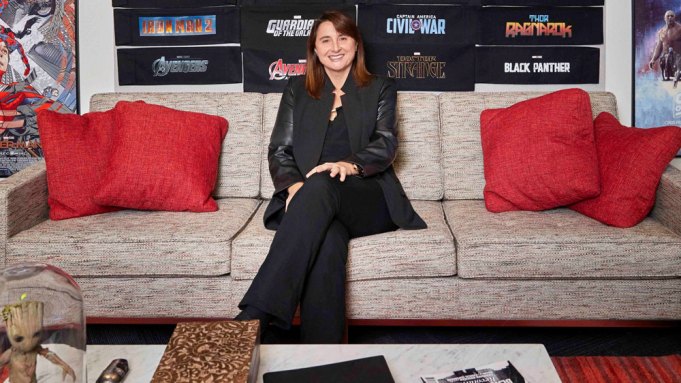 Marvel Studios’ Victoria Alonso will honored next month with the Visionary Award at the 2021 Outfest Legacy Awards.

Alonso, Marvel Studios’ president of physical and post production, visual effects and animation production, will be recognized for her contributions to LGBTQ representation and media visibility. She serves as an executive producer on Marvel Studios’ films and series, including “Avengers: Endgame,” “Black Panther,” “Guardians of the Galaxy,” “Black Widow,” “Shang-Chi and the Legend of the Ten Rings,” “WandaVision” and “Loki.” Marvel’s latest film, “Eternals,” features Phastos (played by Brian Tyree Henry), a gay superhero whose family includes his husband (played by out actor Haaz Sleiman) and their young son.

The Legacy Award gala will also include the presentation of the Guardian Award to Neon. The Outfest Legacy Award will be given to Outfest board member Jonathan Howard. “Tick, Tick … Boom!” actor Robin de Jesús will be recognized with the Terrence McNally Award, and Emmy nominee Rain Valdez will receive the Trailblazer Award.

Current Outfest board co-president Alan Koenigsberg and past co-president Marissa Román Griffith will receive the Jonathan Howard Legacy Award for their leadership during the pandemic.

“As a preeminent arts, media and entertainment organization, Outfest thrusts LGBTQIA artists into the spotlight,” Outfest executive director Damien S. Navarro said in a statement on Wednesday morning. “Forty years into our legacy, our commitment to queer artists remains steadfast, even as the world around us changes in unexpected ways. We are thrilled to be celebrating the incredible talent, impact, intersectionality and advocacy of our honorees.”

Presenters will include Brie Larson and Jamie Clayton.

The Legacy Awards, presented by Cadillac and IMDb, will be held Nov. 13 at the Academy Museum of Motion Pictures in Los Angeles. The evening will open with a performance by Garrett Clayton.