Hey Academy, ‘Don’t Look Up’: Leonardo DiCaprio and Ariana Grande Are About to Crash Awards Season

Netflix's last awards hopeful could be another best picture contender on the streamer's already-full plate.

“Don’t Look Up” is the last shoe to drop for Netflix this awards season, and there’s a 50/50 chance of it making a seismic impact (pun intended).

DiCaprio has launched himself into the awards conversation, delivering another knockout performance as an astronomer desperately trying to share the truth before getting wrapped up in the media and political antics that often plague crises (like a COVID-19 pandemic). Angling for leading actor consideration, he could crack a field that is brimming with incredible names. Early rumblings were on a possible supporting bid for the actor, with discussions surrounding an ensemble approach to the acting campaign. This tactic would have been very sellable to the actors’ branch. Contenders like Jamie Dornan and Ciarán Hinds in “Belfast” can exhale, since this will not be the case.

But is there a supporting actor bid to be made?

Interestingly, with seven career Oscar nominations, five in best actor, DiCaprio has always brought in another actor for the ride, whether the pundits were predicting it or not — Alan Alda (“The Aviator”), Djimon Hounsou (“Blood Diamond”), Jonah Hill (“The Wolf of Wall Street”), Tom Hardy (“The Revenant”) and winner Brad Pitt (“Once Upon a Time in…Hollywood”). Teaming back up with Hill, his role seems designed as a “scene-stealing” standout. Still, with the character’s intentional obnoxious beats and mean-spirited tones peppered throughout, it comes off more like the return of “Superbad” (2007) character Seth than a satirical representation.

Rylance, as a mixture of Mark Zuckerberg and every other tone-deaf billionaire who’s going to space weekly, is creepily impactful, and his industry respect could bring him into the conversation, though conceivably not into the eventual top five. The great Rob Morgan as Dr. Clayton “Teddy” Oglethorpe makes the most of his limited screen time, and there’s likely more of him on the cutting room floor, so it’ll be difficult for him to mount a successful campaign with this fraction of a role.

Streep understands the assignment as a female version of former President Trump, sporting her quintessential comedic flavor and an unusual lower back tattoo. Beloved by the Academy, with 22 total noms, she’s never gone more than five years without a nomination. Her last was for “The Post” (2018). As the saying goes, “doubt Meryl at your own peril.”

Lawrence, who hasn’t been back to the ceremony since “Joy” (2015), is hands down the most “likable” character but seems to be missing the “Oscar clip” that is needed to breakout. However, she does have the best long-running joke of the film that plays throughout and has excellent chemistry with Chalamet.

Blanchett’s Fox News/Megyn Kelly-esque figure is sensationally humorous, and I found her to be the most impressive of the supporting women. Grande’s role is very brief, but it feels almost certain that she will land her first Oscar nom, for original song, for the track, “Just Look Up,” which McKay calls his favorite moment of the movie. I, too concur. It’s what the Celine Dion song in “Deadpool 2” was going for but couldn’t get off the ground on the awards circuit. Looking ahead, could we find an Oscar category that is going to include this many A-listers? 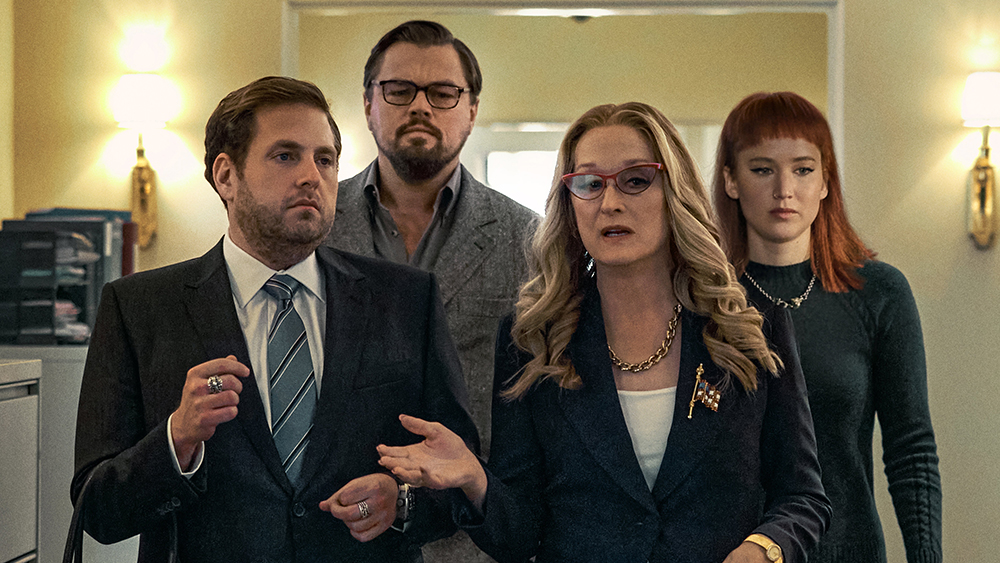 Grande is going to be competing against Beyoncé (“King Richard”), Jay-Z (“The Harder They Fall”), The National (“Cyrano”), Billie Eilish (“No Time to Die”), Jennifer Hudson (“Respect”) and Bono (“Sing 2”). What a wild year. Along with Academy Award-nominated co-writer and composer Nicholas Britell (“Moonlight” and “If the Beale Street Could Talk”), and co-writers Kid Cudi and Taura Stinson, the music categories could serve as its best shot at gold.

There will be awards voters, guilds and critic groups that fall head-over-heels for McKay’s wake-up call to the globe. In a year where the streamer has assembled its most robust roster of film contenders ever, which also includes “The Harder They Fall,” “The Lost Daughter, “Passing,” “The Power of the Dog” and “Tick, Tick … Boom!.” we may need to revisit the question posed last awards season, that ultimately did not come to fruition: can Netflix break the Metro-Goldwyn-Mayer 85-year Oscar record for getting the most films nominated for best picture with five? As the streamer continues to navigate this season with an impressive slate, it’s worth considering.

McKay writes the film, with David Sirota a story receiving a story credit, and he utilizes all the fast-paced high energy he’s shown in his previous two outings, “The Big Short” (2015), which he won adapted screenplay and “Vice” (2018). The former was well-received, while the latter was very divisive among critics and general audiences. This could fall into the latter camp, though I believe it’s the best effort of the three. In addition, the writer’s branch may take issue with some of the film’s meaner beats, particularly the female characters.

The artisan branches will fall hard for its sharp editing by nominee Hank Corwin. At the same time, Oscar-winning cinematographer Linus Sandgren’s (“La La Land”) choices for close-ups and deliberate out-of-focus framing in spots could be an inventive choice for the Academy to check off. I would look for a possible shortlist appearance for sound and visual effects.

“Don’t Look Up” will benefit immensely from the Academy expanding to ten nominees for best picture. So let’s see if it can make contact.