Catherine Zeta-Jones Relives Her Oscar Performances, Including Her Pregnant Duet With Queen Latifah 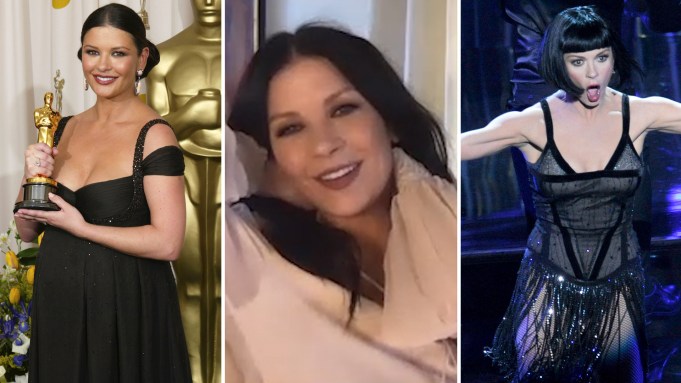 Catherine Zeta-Jones isn’t nervous about the 93rd Academy Awards. Despite the quarantine and scaled-back festivities, the actresses thinks the 2021’s broadcast will be “a milestone.”

She would know, the multi-nominated actress has not only taken home the Oscar gold, but performed for millions on the Dolby stage, twice… once while pregnant. “I was pregnant but not just oh you can barely notice. I had my child ten days after the Oscars.”

Singing the original song penned for the 2003 best picture winner “Chicago” with castmate Queen Latifah,  Zeta-Jones had one thought while rising out of the trap door and preparing to sing, “Why am I singing for a billion people right now?” Joking that she should have been lounging and eating chocolate it’s a good thing she appeared because she also took home the Academy Award for supporting actress for her portrayal of death row dynamo, Velma Kelly.

Ahead of this year’s Academy Awards, Zeta-Jones spoke to Variety about her performances throughout the years at the Oscars and what the annual Hollywood tradition means to her and her family.

Zeta-Jones looks back at that 2003 duet with nostalgia and bewilderment. Ten years later, she would reprise her iconic Kelly again for a celebratory performance of the musical’s iconic hit “All That Jazz,” which has become a sort of theme song for her.

Was she hesitant to revive the jazz hands so many years later? “Of course I was nervous,” Zeta-Jones said. “I’m nervous walking down the red carpet at the Oscars let alone getting up on stage and doing a number ten years later when I haven’t touched my toes or put on my dancing shoes, and had a baby again!”

To Zeta-Jones, the Oscars is more than just an awards show; it’s a meaningful Hollywood tradition.

“I love the history of it all,” she said. “I love the fact that we can sit back and applaud our peers and acknowledge the work done that year across the board costumes, acting, cinematography. Our industry, it takes a village.”

Zeta-Jones also said that she never makes dinner plans on the night of the Academy Awards.

In an unprecedented year, the actor stressed the importance of the escapism that Hollywood has provided throughout the pandemic.

“When those lights go down, we can be taken into another world.”