HBO’s “The White Lotus” comes to an end on Sunday, at least for now. Mike White’s drama series will be back for a second season with a new location and new hotel guests. Viewers can spend one final episode luxuriating in the show’s uneasy mix of sun, disfunction, luxury and loathing amidst a setting of tropical splendor.

Several characters have had notable style moments during the six episodes, thanks to costume designer Alex Bovaird, who pulled together a closet tailored to each of the wealthy characters checking in to the luxury resort. Alexandra Daddario’s newlywed character Rachel, for example, was influenced by New York’s East Village. “Her style was preppy, fun and chic,” Bovaird says. “She can also put outfits together and take risks.”

In contrast, disaffected teen Quinn, played by Fred Hechinger, sports t-shirts with messages that silently comment on the capitalists of the show, such as one for a homeless organization.

But, it’s Jennifer Coolidge’s Tanya, a wealthy woman mourning her complicated relationship with her late mother, who has become an audience favorite and spawned memes and gifs.

Bovaird looked at how she decided what kinds of clothes Tanya would pack for her stay at the luxurious resort, and why she’s the caftan queen. 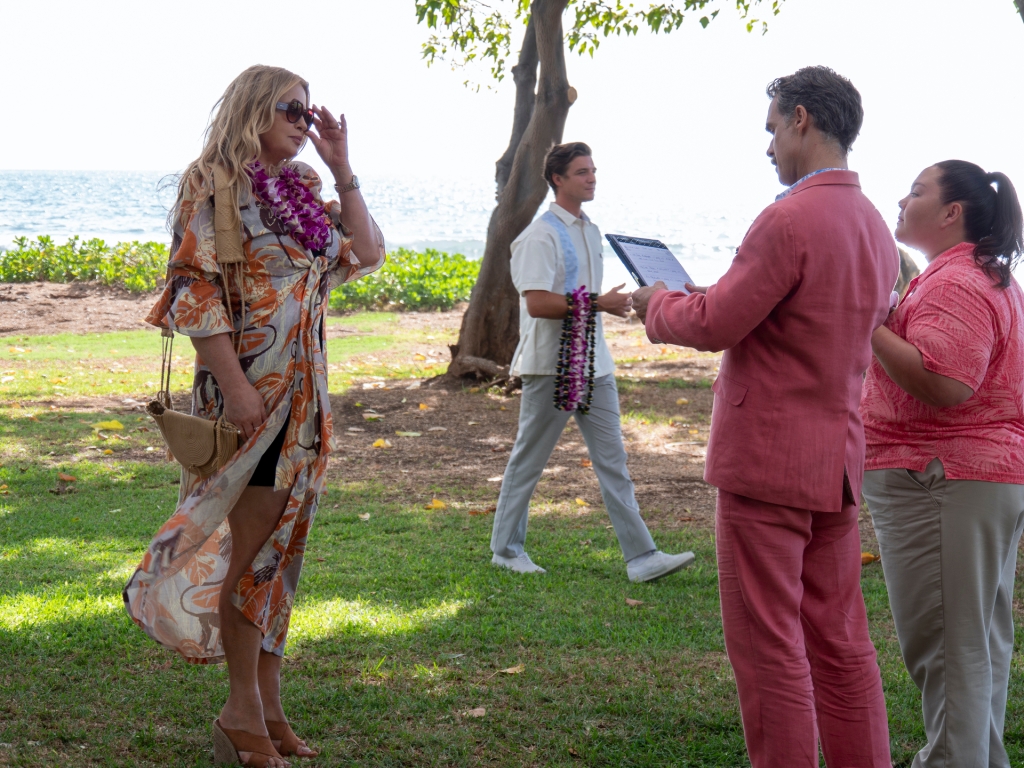 “When I first read the script, she screams kooky costume lady, but I didn’t want to steer her into joke territory either because she plays that so well. We wanted to empathize with Tanya, we didn’t want to laugh at her. It was about trying to strike the balance between, yes, she does eccentric, loud, ostentatious outfits but I don’t want to go too over-the-top.

“I tried to marry classy with kooky for her.”

“The veil was Jennifer’s idea. She had this idea from the get-go that she wanted to have something in the boat scene to play around with. We played around with different ways of wearing it, and we tried it on her shoulders too.

“Again, we’re trying to strike a balance again between comedy, reality and the perfect costume for the day.

“A lot of the guests changed three or four times a day. The scene before that shows her where she can’t figure out what to wear. She definitely contributed to this look and the outfit was vintage. It needed to look good on her and subtle.

“The idea was she probably got it on one of her travels. Maybe in Morocco.”

“This is by Jennafer Grace and it’s a tunic caftan. She’s San Diego-based. We used a few of her things. Since we couldn’t leave the hotel, I had a larger stock than normal of clothes, and I had a bunch of her things because it worked really well on Jennifer.”

“This is by Camilla Resort Wear. They have a boutique in Costa Mesa, and this dress is one-of-a-kind, and I had to get it.

“We put it on Jennifer and it was one of the first things we tried on her. She was really into it, and I think it was my first big score because she was apprehensive about what to wear and how to come across, and she loved that dress.

“That dress also has feathers on the bottom, and you just don’t see enough of it. She just glows in white in the middle of the night.”

“When she comes across the girls with the drugs in Episode 2, that was another Camilla piece. It’s this flowing robe with blue, aqua and green with a hood. The wind catches it and it blows, but she makes such an entrance with it — this beautiful, flowing cape.”

“That was by a local Maui designer Ranjana. We got some sarongs and some wraps. In this, she has a beautiful green wrap. The dress is cheap, but the wrap was expensive, and that was a nice marriage.

“I got a few other pieces from her too for Tanya. Getting the wardrobe was a giant supermarket sweep. When I got the job, before we flew to Hawaii, I was grabbing as much as I could and putting them in shipping containers. I also did some digging around the internet. Outlets were also my best friends. The hotel shop also opened once a week for us — because it was closed at that time and I’d grab things there.”