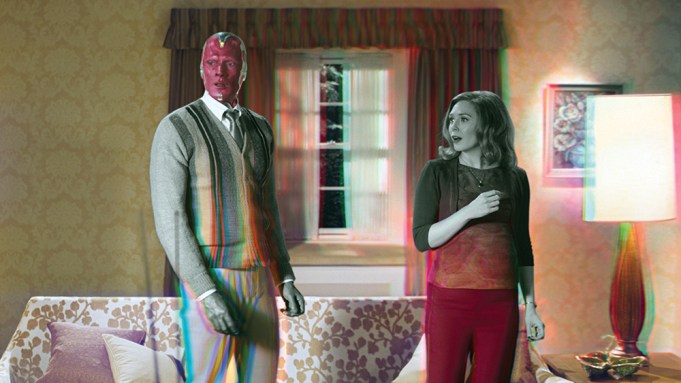 When’s the last time you heard a TV theme that you could hum, sing along with… and remember? If you don’t have Disney Plus, it was probably decades ago. But if you’ve been watching “WandaVision,” you’ve been treated to lighthearted theme songs that sound like they might have been penned 30, 40 or even 50 years in the past.

“WandaVision,” a nine-episode series halfway through its run on the streaming service, bridges the events of Marvel’s “Avengers” movies with the next “Doctor Strange” film by dropping the mystical Scarlet Witch (Elizabeth Olsen) and the android Vision (Paul Bettany) into an idealized (initially, black and white!) suburban environment that has revealed itself to be more complex and sinister than it appears.

Most episodes open with a fun theme that harks back to an earlier era of sitcom songs, echoing “The Dick Van Dyke Show” or “Bewitched” or “The Brady Bunch,” all courtesy of Oscar-winning songwriters Robert Lopez and Kristen Anderson-Lopez (“Frozen,” “Coco”).

“We are the rerun generation,” says Anderson-Lopez. “If you were sick and got to stay home from school, you were watching ‘I Love Lucy’ and ‘My Three Sons’ and ‘That Girl,’ and you hoped your fever would hold on so your mom wouldn’t send you back to school and you could make it to ‘The Partridge Family’ and ‘Gilligan’s Island.'”

Notes Lopez of “WandaVision” and its producers: “The show was so evocative; they were so true to the art and the process of making the old sitcoms. We got a chance to go through our own sitcom boot camp and watch a zillion opening sequences. It was just heaven.”

Their four-note “Wan-da-Vizh-un” motif runs through all of them, and finds its way into Christophe Beck’s dramatic score as well. The Lopezes started work on the show more than a year ago, in the aftermath of their years-long work on “Frozen 2.”

“This felt like a walk in the park, writing a number of minute-long songs that had to have a little structure and set a tone,” says Lopez. “It was unbelievably fun and easy after the mammoth task that was ‘Frozen 2.'” Adds Anderson-Lopez: “It was like training for the Olympics in the Rockies and then descending to Salt Lake City to just go have a sandwich.”

It’s the Lopezes’ vocals we hear on all of them, augmented with a small complement of professional session singers.

The musical cleverness of “WandaVision” extends to Beck’s weekly scores, which range from echoes of bouncy ’60s sitcom music to large-scale orchestral drama as the more troubling aspects of the characters’ idyllic existence begin to surface.

Beck, who scored both “Ant-Man” movies for Marvel and collaborated with the Lopezes on both “Frozen” films, enlisted a collaborator with a jazz background, Alex Kovacs (“McMillions”), to help him keep the sitcom-style music “authentic, from the writing and orchestration through to the recording and mixing.”

Beck’s more symphonic contributions, accomplished with a 75-piece Vienna orchestra, help define Wanda’s character. “She is not a television show hero,” Beck points out. “She’s got a lot of darkness in her, and her struggle is a major theme in this series and will continue to be in movies to come. She’s a witch, and I wanted to make sure that her theme reflected that.”

The last time Beck worked on a weekly series was two decades ago, on “Buffy the Vampie Slayer” (for which he won an Emmy). “The schedule on that show was, they would shoot and edit, and I would have a few days to work on each episode. There wasn’t a lot of opportunity for long-term planning of thematic architecture. This was different. It was really nice to have an idea, from the beginning, where the show was going. I feel like this score is my most strongly thematic work to date.”

And, for “attentive fans,” Beck points out, “there are also musical Easter eggs that refer to other Marvel films. Some of them are pretty subtle. Some are not.”