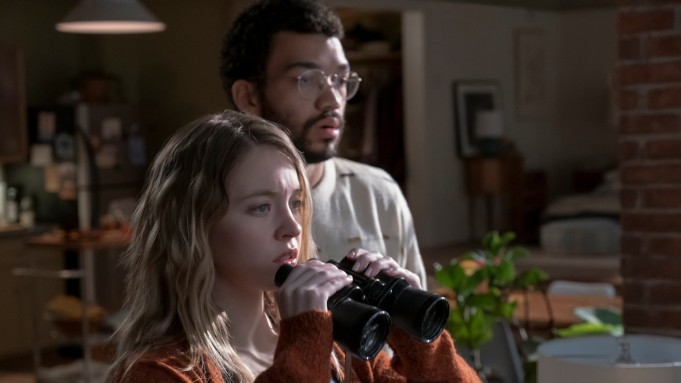 Mohan and Blank breakdown the title sequence and how it almost didn’t happen.

What were some of the initial conversations you had surrounding the title sequence?

Michael Mohan: The title sequence almost didn’t happen. I was trying to figure out how to get the movie shorter and shorter. At one point, I thought of not even doing one, and the only reason this title sequence exists is that our executive Julie Rapaport at Amazon said, ‘No, you want a title sequence.’

What did you want the close-up eyeball footage to convey?

Mohan: When you look at super macro footage of an eyeball, there’s something very intimate about it. Everyone’s eyeball looks different from one another. So, when we were shooting it, it almost felt a bit like we were violating it because we had to put the microscopic lens right up to the eyeball in order to see it. It’s the intimacy in the movie, but there’s also something a little bit gross about it because it’s this weird mass with veins and tendrils, but the colors are really hypnotizing.

Blanks: Before we even decided to go out and shoot eyeball footage, I thought we could construct it from stock footage or existing images of eyeballs. But I did a search and nothing was high-res enough for it.

We wanted to get so close to the texture of the iris that you almost couldn’t even tell it was an eye at first, just that it was abstract patterns and textures. Throughout the sequence, we would almost reveal that it was an eyeball, and it becomes clearer.

The only way to do this was to go out and shoot it. It’s 8k footage so I can zoom around the different areas of the eyeball, and because of how close the lens is, you wouldn’t believe how much the eyeball moves. I had to slow the footage down a lot and smooth it out and cut out the extra frames of the weird movement.

What did you want that font to say?

Blanks: The biggest thing that I do in title design is finding the perfect typography for the movie to tell people this is what you’re going to be watching, this is the feel and the vibe. If you go back and look at the erotic thrillers such as “Basic Instinct,” “Fatal Attraction” and “Body Heat,” those fonts are simple. They’re not illustrative. We wanted to go a little bit further than that. Michael called me and said, ‘What about Danielle Steel book covers?’ I immediately knew what he meant because my grandmother used to read her books. She would also read Sue Grafton and other mystery detective books and romance novels. There was something lurid about those books.

It became about how to recreate those covers and I knew it wasn’t a font. I would have to create them. So, I tracked down the designer of those book covers. The covers were designed by Andrew Newman and I learned each one has had a custom font and a custom logo made by David Gatti.

I was hoping they’d have a custom font sitting somewhere, but quickly realized that wasn’t the case and so I’d have to create my own using those book covers as a reference.

Is there an Easter egg in the title sequence?

Mohan: The only time you see an eyeball blink is on the cut to the editor’s credit. That’s a little subtle nod to Walter Murch,  who edited “The Conversation,” which was a huge influence on the narrative of this story.