Watching Paramount Plus’ “Dragging the Classics: The Brady Bunch” — a recreation of the 1971 season 2 episode, “Will the Real Jan Brady Please Stand Up?” – audiences could easily think the sets were also faithfully recreated for this “RuPaul’s Drag Race” meets “The Brady Bunch” crossover. But the production was put together with the aid of green screen and the magic of virtual production.

A Variety set visit to L.A Castle Studios  in Burbank took place under strict COVID protocols. Masks and face shields were worn for cast press interviews and a negative COVID test was needed before one could even step on set. Additionally, temperatures were taken before being shuttled over to the set.

Crew sat working on laptops, in front of them a giant monitor projecting a scene between Kylie Sonique Love as Jan Brady and Kandy Muse as Cindy acting against a green screen.

Green screen has become an essential part of filmmaking – especially in the wake of the global health pandemic. Not only does it reduce the size and scope of location shoots, it reduces the need for set builds. “Our Unreal Engine technology allows productions filmed here to be set anywhere in the universe, past, present, or future, with total reality. That means Ancient Rome, present-day Times Square, a futuristic colony on Mars, or anywhere else a producer needs,” said L.A Castle Studios owner Tim Pipher. In this case, it was a set familiar to generations and audiences all across America. “When ViacomCBS and World of Wonder came up with the idea of exactly replicating sets from an iconic TV series from 1971, I immediately knew they’d found the perfect use of the technology.” 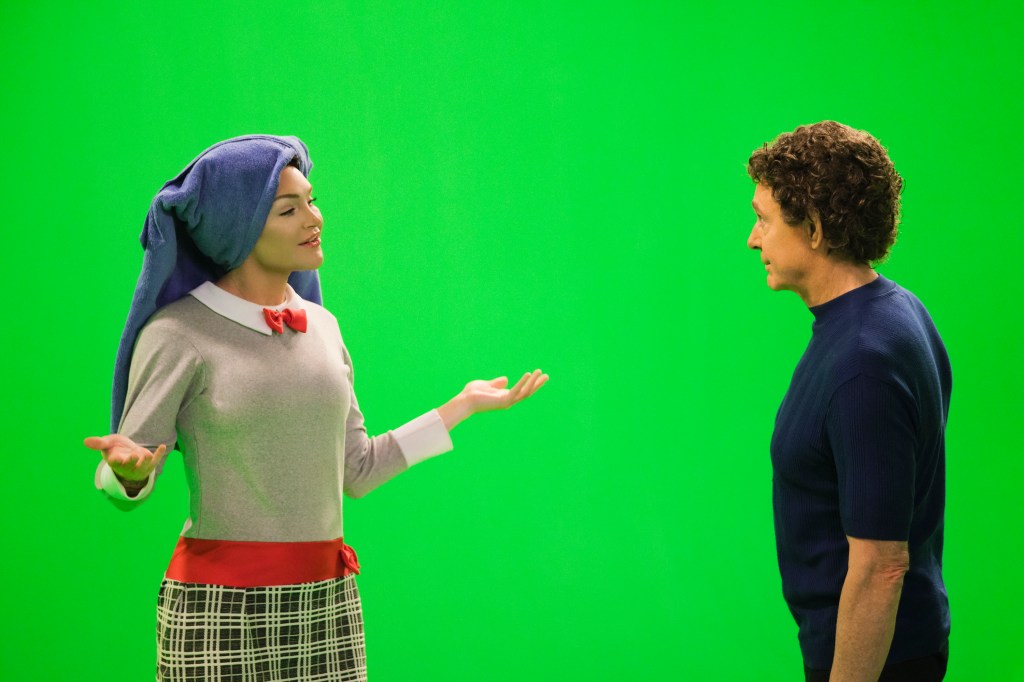 With “Dragging the Classics: The Brady Bunch,” the sets had to be exact, and since they hadn’t been in existence since the show ended, the perfect blueprint lay in the episode itself. Like most of the cast, it was a first-time experience where they had to work in a new professional environment with everyone learning together.

Shea Couleé, who plays Marcia Brady in the episode, said interacting in that world via green screen was fun. “I had to let my imagination color the page for me. All I need to do is awaken that inner child and be imaginative.”

Bianca Del Rio, who plays matriarch Carol Brady, considers the show’s kitchen set iconic. While she didn’t get to stand on the famous set, she had some props such as a table and chair. The rest was all part of the illusion. “It just blows my mind that everything exists in this non-existent world,” Del Rio says.

Of the non-existent world, Muse says it’s something that you get used to, having the minimum amount of props to touch. “You just have to know your cues and where you’re standing,” she explains.

The monitor shows the imagined world that comes to life through the magic of game engine technology, made popular on shows such as “The Mandalorian.” “It’s so funny looking at the monitor to see that world that has been created for you.”

BenDeLaCreme, who plays Greg in the special, agrees that imagination played a big part in helping to navigate the technology.  Props certainly made it easier while having to remembering lines and portraying the 12-year-old character.

Barry Williams, Greg on the original show and family patriarch Mike in the special, called it a learning experience and a growing one as they maneuvered “perspective positions. All of that needed to be retaught,” Williams says. 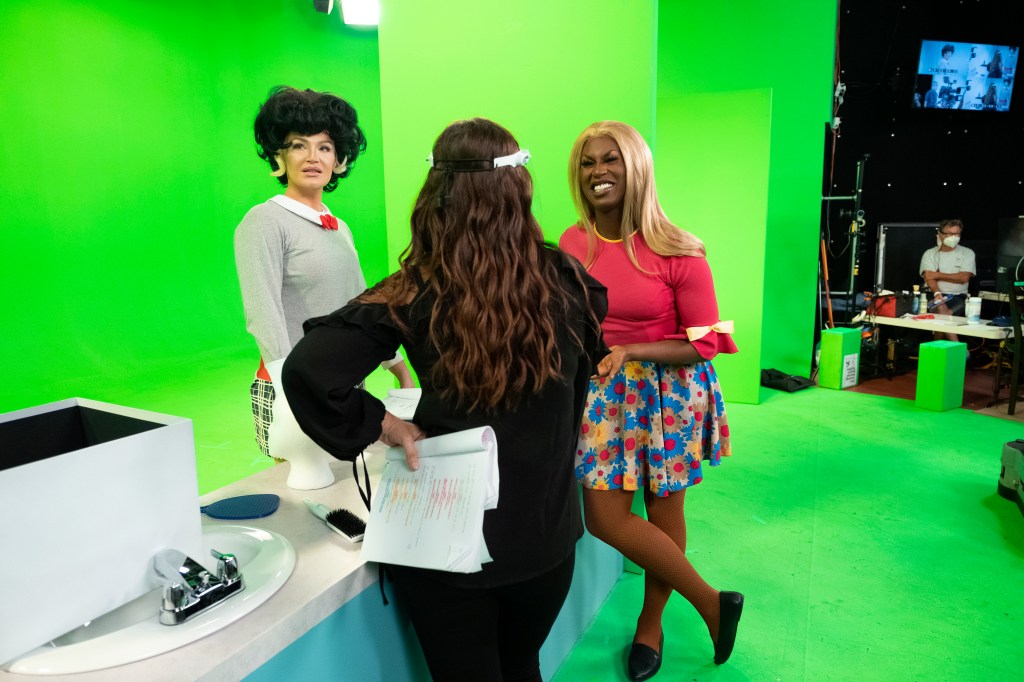 The technology wasn’t new to everyone. Actress Eve Plumb worked with virtual production technology in “Grease Live!” and notes they had very few points of reference on-set and for scenes that feature cast members walking through doors and even sitting down calls the results “astonishing.”

Pipher had no doubts about whether or not “Dragging the Classics: The Brady Bunch” could be pulled off using the technology and under COVID safety protocols.  “If they want to come back in six weeks or six years for another Brady Bunch Crossover episode, their sets will be waiting for them, stored on a hard drive.” He adds: “There’s no need to tear down a set that doesn’t exist the way the producers had to after the original series in 1974.” 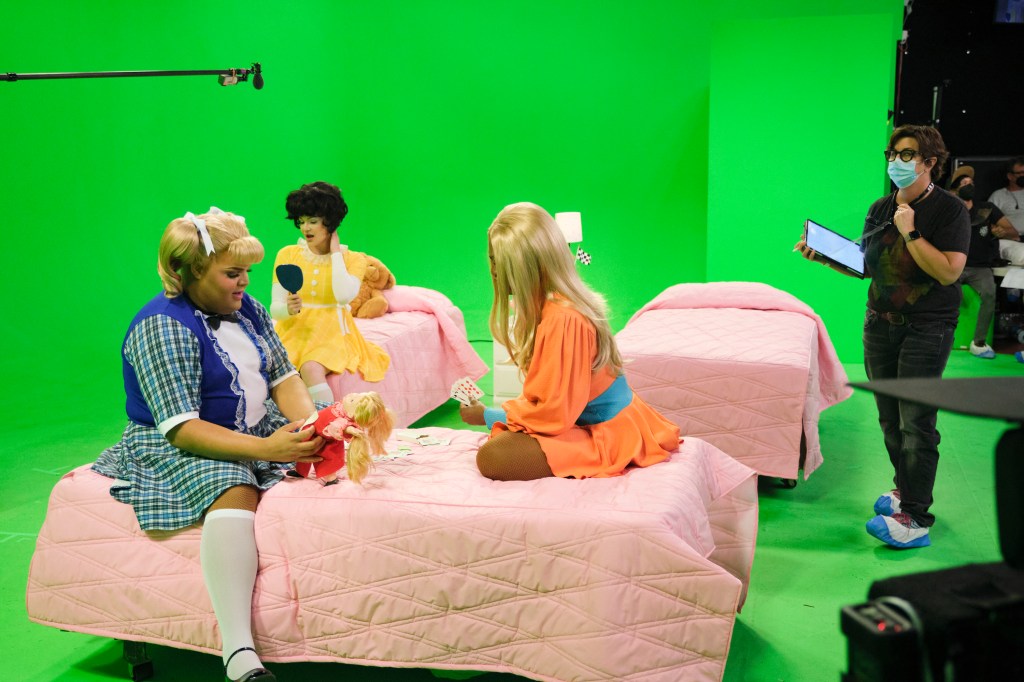