“The Many Saints of Newark” is a prequel to the beloved HBO series “The Sopranos,” but it unfolds in a much different sliver of New Jersey. This film is set in the apartment buildings and tenements of 1960s and ’70s Newark instead of the sprawling McMansions where Tony and much of his crew decamped on the show.

It is a city on a knife edge, with roiling racial tensions and inequity that are about to explode in a dramatic conflagration of unrest. “The movie is about the time before they all went off to the suburbs,” says Bob Shaw, the film’s production designer. “They were still clustered in the old neighborhood, living in these cramped spaces in sort of an ethnic enclave.”

A key issue for Shaw, director Alan Taylor and “Many Saints” writer and “Sopranos” creator David Chase was that downtown Newark had changed so markedly in the ensuing decades — the houses knocked down and replaced by apartment buildings or outfitted with vinyl siding from a later era — that they needed to shoot much of the film in the Bronx. 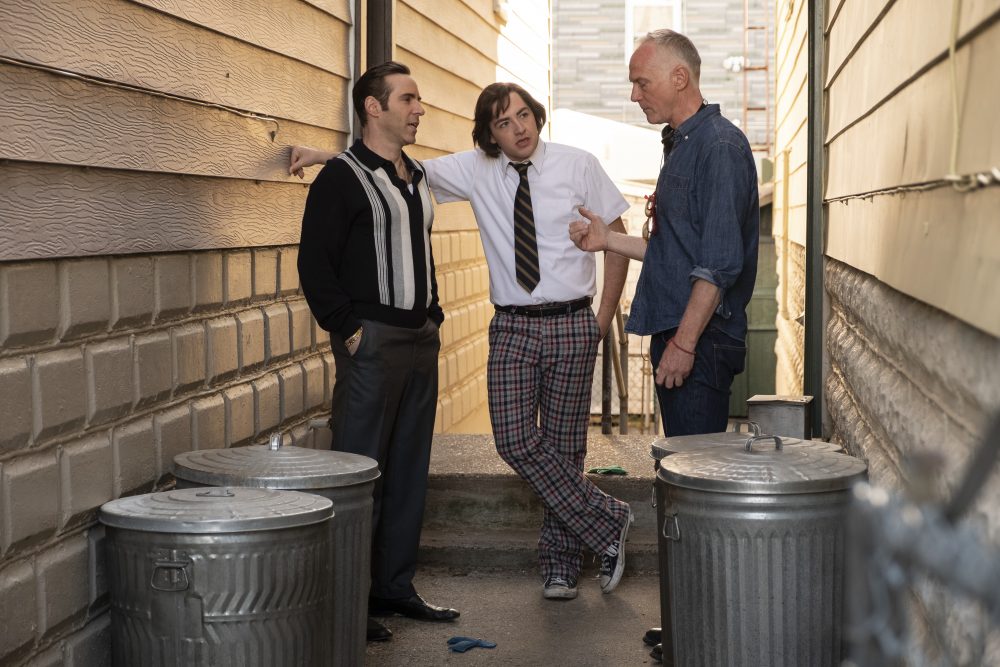 There were a few scenes, however, that the “Many Saints” creatives believed could not be replicated up the turnpike. Shaw and his team worked to re-create the 1967 riot while shooting in Branford Place, a prominent shopping district that they outfitted with retro signs for bars and delis and period-appropriate theater marquees. Cars were set ablaze; smoke machines were utilized; and actors in National Guard uniforms rolled down the streets in tanks and jeeps pursuing scores of extras. Though filmed in 2019, the sequence has greater emotional resonance in the wake of George Floyd’s murder and the Black Lives Matter protests that unfolded in the summer of 2020.

“It was such sensitive material to our country and to our whole identity,” says Kramer Morgenthau, the film’s cinematographer. “We knew we had to be accurate, and we knew we had to get it right. Sadly, what happened in 1967 still rings true today.”

Even though the setting may be more urban than that of the series, there are still familiar signposts. A key scene where Tony is supposed to have a sit-down with Dickie took place in the doorway of Holsten’s, the diner where the Soprano family eats dinner in the series finale right before the show’s infamous fade to black. Very little had to be done to dress that location, other than to outfit the restaurant with a period-appropriate awning. Shaw was also tasked with re-creating the back room of Satriale’s Pork Store, the slightly rundown hangout of the gangsters who make up the DiMeo crime family.

“The physical building — the walls, the windows — we didn’t change much,” says Shaw. “The whole thing was sort of retro in the series, so we just removed a few layers of dust and 30 or 40 years of stuff on the walls and shelves. “

The crew’s quest for historical accuracy extended to the way the film was shot. Morgenthau used darker shades in the sequences set in the 1960s and attempted to evoke the look of the Kodachrome photography of the time. As the film moves into the 1970s, the cinematographer injected more pastels, greens and blues into the palette, a nod to the flashier style of clothes and decor that characterized the disco era.

Looming over the whole project was an intense feeling of responsibility. “The Sopranos” isn’t just beloved. It’s considered to be the greatest show ever made and the spark that inspired the television renaissance of the aughts.

“There was huge pressure to do something special with this film because of the legacy of the show,” says Morgenthau. “It’s almost a piece of Americana at this point. But at a certain point, you just try to stop thinking about it and do your job.