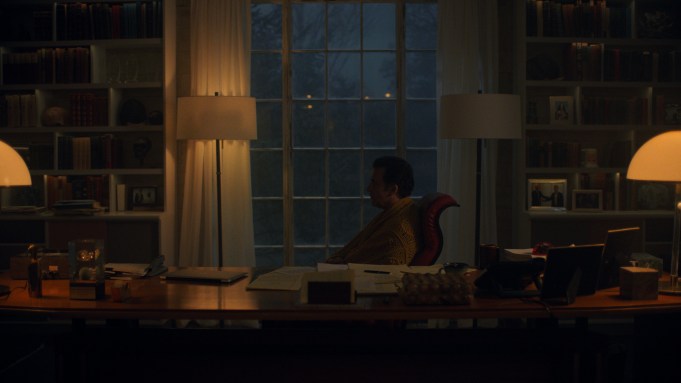 Apple TV Plus’ “Lisey’s Story” has been adapted for TV by Stephen King and is based on his bestselling 2006 novel of the same name. The story flits between past and present, fantasy and reality. Directed by “Jackie’s” Pablo Larrain, the audience never fully knows which is which, and in this perfect union of Larrain and King, it makes for a compelling watch.

The series stars Julianne Moore as Lisey Landon. Two years after the death of her husband, world-renowned novelist Scott Landon, Lisey has to face memories of her life and marriage to Scott, which leads her to face visions of unsettling realities.

However, it was up to production designer Guy Hendrix Dyas to bring King’s world to life,  delivering his vision as well as Larrain’s. Much of the story centers around a New York farmhouse, a pool and a fantastical dream world of Boo’ya Moon. In an exclusive interview with Variety, Dyas talks about building Lisey’s world.

Were you familiar with the story? If not, did you begin with the script or the book?

Stephen King’s script had some interesting variations from the original book, so I was focused entirely on the scripts at the beginning. Eventually, I read the book after studying the scripted material and hearing Pablo’s vision for the story as a whole. I’d hoped to learn from Stephen’s original novel extra detailed descriptions about the environments and perhaps a stronger sense of the overall aesthetic that he had envisaged.

What did Stephen King tell you about Lisey’s world? Did he want to do anything differently?

Stephen was always very down-to-earth and approachable. A lovely fellow, he put the crew at ease and was very clear about his vision, but also very encouraging if he saw something new that excited him. The whole process was very collaborative. He didn’t seem to be rigid about the world creation, he was happy to see what I was creating from Pablo’s interpretation and guidance. From my perspective, the true excitement was in the creative relationship that had formed between Stephen and Pablo, both are highly imaginative visionaries. Their story meetings together yielded material that was highly inventive in the visual sense. Stephen took time to visit the sets frequently and often arrived to see what we were up to mid-construction. Always steering, always constructive, it was a pleasure for us all to have Mr. King sightings on the sets.

The pool is an integral part of the story, how did you design that?

The pool was the central design task for me. I had read the various descriptions and thought deeply about what the world of Boo’ya Moon could be. I presented my sketches of an ancient stone amphitheater, similar to those I’d visited in Greece or Rome. Both Stephen and Pablo loved the simplicity and spiritual feeling the environment emitted. Pablo had added his own South American influence by asking me to study and incorporate details from ancient Maya, Inca and Aztec civilizations. As the story unfolds, characters talk in detail about the environment they inhabit, they just accept that they are there, so in many ways the design needed to be self-explanatory. The set was built on Stage 3 at Steiner Studios in Brooklyn, I hoped the final design conveyed a strangely dark, religious undertone with a strong sense of history.

What was it like searching for the perfect Stephen King house?

The Landon home where Lisey still lived was an old farm located in rural Blauvelt, New York. Pablo, Darius [Khondji] and I visited the location several times, but it was clear that this was what Pablo had envisaged in his mind’s eye. The place excited him. Most of the key elements were there, although we did have to design and build a functioning swimming pool in the garden for Lisey to use, and we augmented the architecture of the exterior to match our interior sets to be built back at the Brooklyn Navy Yard. Scott Landon’s study was located in the barn’s upper level. Pablo had shared a video of Stephen’s actual writing studio which had been in an old, converted barn, so we drew from this fascinating inspiration for the design.

What were the conversations you had with Pablo about bringing this all to life?

From the beginning, Pablo had expressed the importance of water as a means of getting to Boo’ya Moon. Whenever the audience sees or hears water, perhaps running faucets or even raining interiors, they should know that a character will likely transition to the other world. I loved his concept, and the theme of water went on to greatly inspire so much of my design thought process. Pablo’s idea was not just confined to the magical pool. Water appears everywhere in the series; from a custom-built fish tank (completed with a tiny shovel) to carefully chosen paintings showing the sea and strange islands. Even the forest of Boo’ya Moon built on stage was inspired by studying elegant water plants, seaweed and the brightly colored coral of the great barrier reef.

How did you bring Boo’ya Moon to life and how much did Stephen’s past work influence that world-building?

To bring Boo’ya Moon to life, I knew we needed a very mysterious and otherworldly feel to the landscape. It needed to be completely unique and not like anywhere we might have experienced before. Pablo’s water concept became a huge clue as to the direction the plants and trees would take, and I began researching underwater vegetation and coral formations. Following this, it was a matter of sketching and painting the world in order to gauge Pablo’s reaction. Once I got close to a finished design with artwork, I focused my art department on making elaborate models of the forest. Eventually a test section at full size was created on stage to make sure it was perfect to look at and going to work as a functional set. This also gave both Pablo and Darius a chance to shoot the set and begin conversations about lighting. “Lisey’s Story” is such a personal and unique novel within Stephen’s own body of work that I found myself not needing to look back to his past projects for influence. I sensed he wanted something different for “Lisey’s Story.” In all honesty, it was such an exciting experience to have created the world for him, it was simply a joy.