How ‘In The Heights’ Production Designer Nelson Coates Constructed the Neighborhood

“In the Heights” production designer Nelson Coates had an important task from Lin-Manuel Miranda: The bodegas for the film adaptation of the stage show needed to be located east of Broadway, “because that was a historic Puerto Rican, Dominican and Cuban neighborhood.”

Anything west of that would be predominantly Irish, Russian or Jewish. The last thing director Jon M. Chu and Miranda wanted was to shoot anywhere but in the Heights. The film centers on the vibrant Washington Heights community and follows bodega owner Usnavi, played by Anthony Ramos, who dreams of a better life and returning to the Dominican Republic. Corey Hawkins (Benny), Leslie Grace (Nina), Melissa Barrera (Vanessa), Olga Merediz (Abuela Claudia) and Daphne Rubin-Vega (Daniela) also star.

Coates breaks down how he built the neighborhood seen in the movie, out June 11 in theaters and on HBO Max.

“Audubon Avenue, which runs from West 165th Street to West 193rd Street in the Washington Heights area had the most workable start point. It had a bodega on a corner, but it wasn’t our bodega and there was no room inside. It was too small.

The script also had one salon, and yet this intersection had within its confines six different barbershops and salons. I knew I had to obfuscate those and then come up with our spot. The southwest had the potential for the bodega; the southeast corner had a series of townhouses. Cinematically, it was weak. I pitched that we actually build the salon, or at least the facade there to give the strength to the intersection.

The northeast corner had a car service on it, but it wasn’t the car service we wanted. There are a plethora of other shops. We went through and started contacting all the owners for a full block on both sides — the equivalent of four city blocks — because we had to figure out a way to keep them open, and also make it look how I wanted it to look.”

“For our hero bodega, which goes through several metamorphoses in its storyline, it encompasses a salon next door and the bodega to look as big as it really is. In between takes, we would lift the rolling door so that [the shop owners] could get sunlight for their patrons and allow people in and out. The challenge was to make sure it felt like we didn’t do anything.

The majority of our shooting schedule is actually onstage. The inside of Usnavi’s bedroom and the inside of the car service were all onstage.

In the musical, Usnavi and Abuela Claudia live above the bodega. We couldn’t get an apartment that would work, and it would take too much time to go from the apartment and get to that intersection.

Jon had this idea to put a townhouse in one area, set up the salon and the bodega with the George Washington Bridge in the distance, which created the cinematic neighborhood.”

Jon wanted Usnavi to refer to it in the opening number I had to find old Caribbean maps, and we had to see Cuba and the end of Florida because then people know where it is. But I had to make the map unique and different.

When you watch the movie again, you’ll see the map is made out of pieces of everything Usnavi sells in the bodega. There are lids of cans and soup, little Pepperidge Farm [Goldfish crackers], Metro cards and Sweet’N Low packs. The Florida Keys are made out of keys.

The Dominican Republic is made from old tile that makes it look like the flag — and the map has this homemade quality to it, so you can feel the love in it, and it feels like the bodega.” 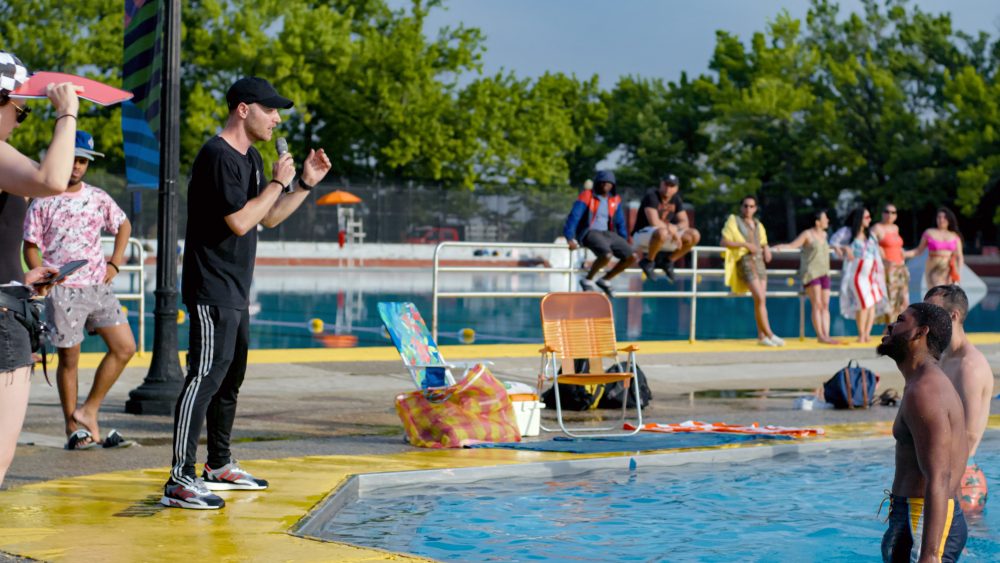 “We started working with the city on Highbridge Park pool because Jon wanted to do something there, which ended up being the ‘96,000’ sequence.

Park officials said they’d never allowed anybody to film in the pool. They were insistent that it open on the same opening day and [told us] that it takes a certain amount of time to fill that pool.

It used to be an old reservoir, and it’s the largest pool in all five boroughs. But it needed extensive rehabilitation to look appropriate. It also meant that they had to start filling it sooner because the water has to try to warm up a bit.

We could only film [for] four days in that pool before it was going to open to the public. I had to get them to do the renovations that we wanted, which included pulling out fences, replastering and repainting.”

“I walked every single street in all of Washington Heights, all of the Bronx, all of Inwood. I was taking pictures copiously of what makes the Heights specifically the Heights compared to everything else.

I went into every single bodega and every single salon. I was cataloging everything. Washington Heights has gentrified quite a bit, but I was finding details that remained in all parts of the area, and we started working on mapping out our intersection and figuring out what all the [storefronts] would be. We introduced facades all over the place. There was a computer store that we turned into a farmacia. With the murals, those were designed on a computer, and we used this superthin material — Photo Tex — to print them on that we could then apply to the brick so that it looked like it was painted on the actual wall.” 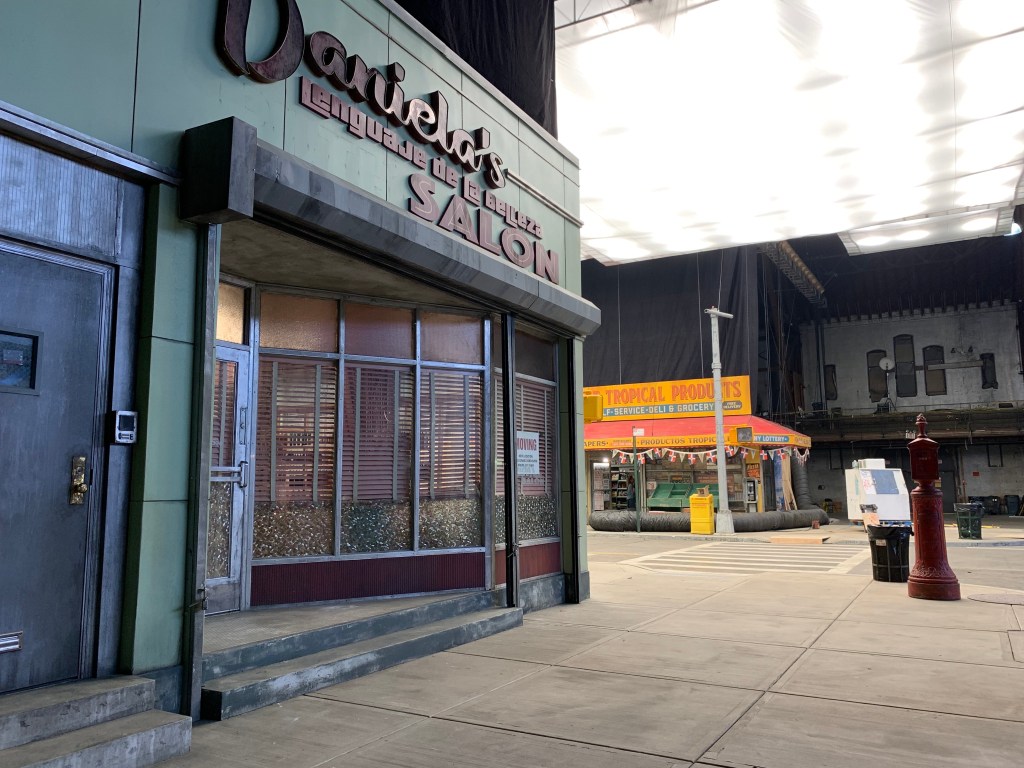 “Throughout the set, I put Easter eggs in.

With Lin’s piragua cart, he had done a little drawing when he was in high school of the subway going through the Dyckman tunnel with a little guy getting off, and in big black letters he had written ‘In the Heights’ before he had written anything. When Jon showed me this, I took the little drawing and I carved it into the side of his cart.

There’s an apartment complex called the Nadal Apartments, named after Lin’s wife, Vanessa Nadal. Under Daniela’s salon, you’ll see a ghost sign from its past iteration, and it says Ruth’s Bridal — which is Jon’s mom.”