While filming Jon M. Chu’s “In the Heights” (out in theaters and HBO Max on Friday) cinematographer Alice Brooks fell in love with “the people, the smells, the sounds and the taste of Washington Heights.”

That relationship is captured through her framing of the film. From the shoe shot of Vanessa (Melissa Barrera) to the crane shots capturing the neighborhood, Brooks translates Chu’s vision of adapting the Lin Manuel Miranda musical for the screen with aplomb, drawing raves for her camerawork.

During the titular number “In the Heights,” a song and dance that introduces audiences to the key players, Brooks hones in on Usnavi, played by Anthony Ramos, peering out the bodega window as he dreams of returning to the Dominican Republic. In the window is a reflection of a group of dancers.

Brooks describes the film as one that is an “immigrant story. It is the story about what happens when your dreams come true. It is joy. It is a sense of community.”

She breaks down the framing process for key sequences.

“I asked my gaffer to take lots of color temperature readings and weather readings. We kept a really good journal of exactly what the light was doing outside the bodega, and we were able to replicate those then when we got to our stage, and I think it works seamlessly.

“Reflections play a big visual role throughout the movie, we have lots of reflection shots, and that is our first main one – there’s a smaller one with Abuela Claudia (Olga Merediz) before that, but for this, there’s a push in of Usnavi in the window of the bodega, and it’s the first time you see dance, and I love that the first time you see dance in this movie is reflection.

When Usnavi tells the kids at the beach that the streets are made of music, you are allowed to be in a musical, and it invites the audience to suspend their disbelief. It’s organic and part of the storytelling. I love that the music feels so organic and that it feels like an expression of the cast members when they need to sing.

“The first time we see the dancers in reflection, as Usnavi sings ‘I’m a streetlight, chokin’ on the heat,’ I push in on him, and there are the dancers reflected over his face.

“We had to shoot the dancers on location because that bodega wasn’t built and we had to shoot Usnavi at the bodega. We shot the dancers four or five weeks before we ever shot Usnavi’s shots. So it was a lot of knowing what our puzzle pieces were and how they were going to fit together.

“The pool was incredibly challenging. We shot in Highbridge Park pool, and it was the first time any movie was allowed to shoot there.

“It’s two huge pools because, in the early 1900s, it used to be the reservoir for the whole city. The challenge for us was there was a system of tunnels under the deck. We knew we wanted that high overhead shot on Vanessa and the Busby Berkeley shot. But we had to work with engineering to see what size crane we could actually fit that wouldn’t collapse the tunnels below.

“We have underwater shots where we start in a crane and then we end up under the water. We had a wonderful underwater operator come from Florida and work with us.

“That was meant to be shot in two days, and we had torrential rain. We couldn’t move it because the pool was opening for the summer and it was freezing, the water was freezing.

“We ended up shooting over four days because of the weather challenges. We did the underwater shots when it was raining because you can’t see the rain.

“What I love about that number and it plays in several numbers is unique to our movie, each character can express their hopes and their dreams, their fears and their anxiety.

“It’s not only song and dance, but also through the world around them, and sometimes you feel their world visually shift. I love that we rush into the swimming pool behind Sonny’s ( Gregory Diaz IV) back as he opens the door and that allows us to start getting into everyone’s dreams.

“You Benny (Corey Hawkins), the salon ladies, Vanessa, Usnavi and Sonny. You get to see that this movie is about dreams, big and small and how the community really supports those dreams.” 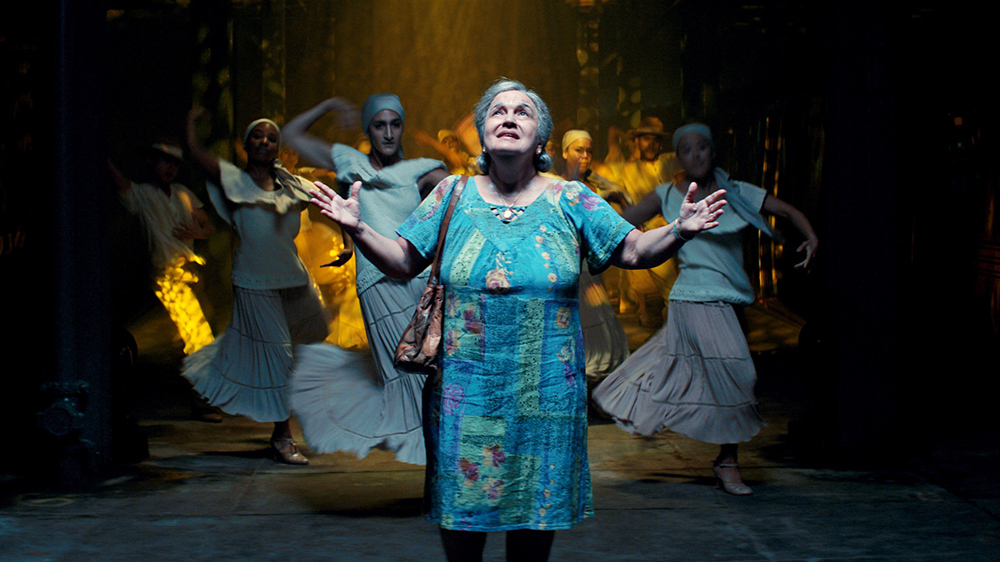 “It was incredibly challenging. Filmmaking is a team effort, and when it’s magnificent. Everyone was passionate about being there, and that’s so rare to have everyone feel such ownership and love of a movie while you’re making it.

“This was one of the first locations we started looking for. Jon knew he wanted it to be an elegant light show of some sort, but not too theatrical. We started looking at all these beautiful architectural spaces and huge spaces in New York, but none felt right, and then the idea of the subway came up.

“Our location manager and the MTA worked hard together understanding what we wanted. They found an abandoned platform way out in Brooklyn on a D Avenue line.

“The current platform was three stories above ground. There was no elevator, it was dark and hot. We also had to bring the equipment down. We used both sides of the platform. We had old vintage cars coming in, but we couldn’t just leave the cars there. So, we had to light the train cars and we had one day. A lot of that was about the platform lights which we rigged ahead of time.

“With the subway tunnel, we could only shoot there from 5 p.m. to 5 a.m. Our radios didn’t work along this 900-foot tunnel so it became a relay system of people communicating to each other, down this line.”