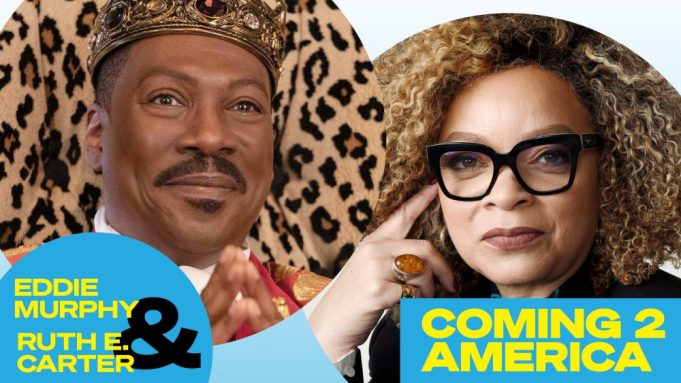 “Coming 2 America” the long-awaited sequel might have just been released, but star Eddie Murphy already wants a third film and he wants costume designer Ruth E. Carter to return.

The two sat down for Variety’s “Dream Teams” sequel to discuss their latest collaboration, and Murphy is planning, but audiences don’t have to wait thirty years, “You have to do next time,” he tells Carter. “[Set] sixteen years from now.”

Carter and Murphy have collaborated on numerous projects including, “Dr. Dolittle 2,” “I Spy” and “Dolemite is my Name.” She knows the secret to their success is a simple one, “[Murphy] doesn’t want the costume to be the funny thing. Let the clothing be the clothing and he can be the funny part,” Carter says.

He adds, “Makes clothes that make the character walk different or affect your performance so that you get a better sense of how the character moves.”

While Carter did not design the costumes of the original film, she threw several subtle homages to the first. One sequence shows King Akeem wearing a cap with a vest — a sporting look. “I did the vintage golfing look with the hat and the vest, harkening back to the first film to show that he’s not playing polo anymore.”

She even took great detail to accurately recreate Akeem’s famous New York jacket when he returns to New York. “We copied that jacket to the letter,” Carter explains.

The costume designer also got to bring the iconic barbershop trio to life and dress the scene. “I remember laughing at that scene when I saw it in the movies, to be able to dress that scene was a real proud moment.”

No stranger to crafting looks that tell a story of Black royalty – Carter designed the costumes for “Black Panther” and made history when she became the first Black woman to win an Oscar for costume design – she put Murphy’s king in silks and velvet.

“There has never been a movie like this and ‘Black Panther,’ the two times we’ve had Black royalty on screen, we’ve never looked like this,” Murphy says.

Watch the conversation above.