Denis Villeneuve’s long-awaited “Dune” arrives in theaters and on HBO Max on Oct. 22, and has already become part of the awards conversation for its sumptuous visuals. The action follows Timothée Chalamet’s Paul Atreides, whose family inherits the planet Arrakis, an unforgiving desert world that also contains the only source of “spice,” the most valuable material in the universe.

Cinematographer Greig Fraser (“The Mandalorian”) was guided by Villeneuve’s passion when it came to framing the film. “He’s been wanting to make this since he was a kid,” Fraser says from London. While the grandeur of the movie wows audiences, Fraser says Villeneuve felt the film should “feel extraordinarily intimate to the characters. We didn’t talk about the scale, because that goes without saying.”

“Any decision I made about lens or movement, I fell back on the character,” Fraser adds. “That meant keeping individuals in the center frame unless we were showing them in amongst the landscape. More often than not, the landscape was secondary to them, and their coverage.”

A long-foretold prophecy looms over Paul, one he doesn’t understand, and which sets the stage for a rivalry between his family and the Harkonnens. Villeneuve homes in on Paul and House Atreides. When it came to lighting the interior scenes at the Atreides’ Arrakis compound, Fraser notes there were no windows. “So how do we tell the story of this fortress designed to withstand war and heat?” he asks.

Production designer Patrice Vermette and Villeneuve solved the problem by using light wells throughout the fortress. Fraser explains: “The light is effectively the byproduct of bounce light [that comes in] through a shaft. It’s not direct, harsh sunlight.”

The softness of the interior lighting was in stark contrast to the harshly lit exterior scenes. “We had the opportunity often to shoot sunrise and sunset, but we chose not to a lot of the time,” Fraser says. “We chose not to romanticize the shot.” 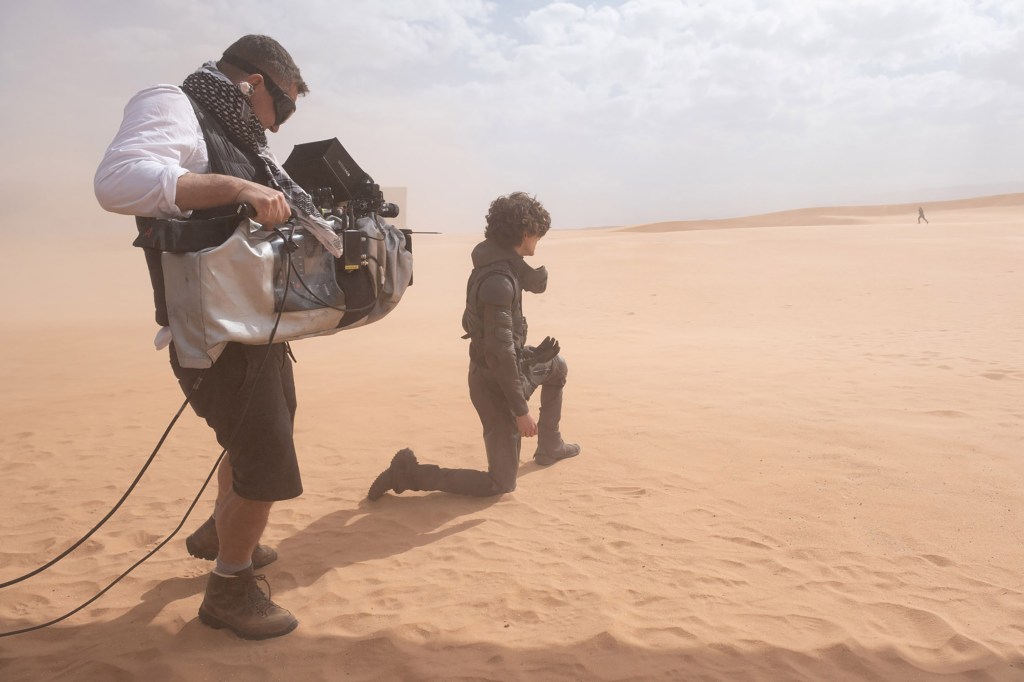 Fraser also backlit the actors during the exterior moments, in an effort to avoid “panda eyes” — dark eye sockets caused by bright, contrasty sunlight. “We shot in Jordan and Abu Dhabi,” he says. “It’s not hard for the sun to look super harsh, so trying to find that balance and stay cinematic was still a challenge to ensure the shots weren’t badly lit.”

During original test shots, Fraser and Villeneuve shot on 35mm film, IMAX film and on digital.

Production company Legendary Pictures gave Villeneuve carte blanche to shoot in any format he wished but advised digital would be the easiest since he would be working on location where labs, couriers and other factors could hinder him from getting dailies.

Fraser admits he had been excited about the process of using film. “I fully expected to love IMAX film or even 35mm anamorphic, but I didn’t love it as much as digital,” he says.

Ultimately, the movie needed to feel contemporary and not nostalgic. To achieve that, Fraser worked with L.A.’s FotoKem, one of the only digital labs that also processes film. “I went to them asking what if we shot digitally, spit it out to film and scan it back in. That way, we’re not originating in film, but we are involving it in the process, and it adds that analog component.”