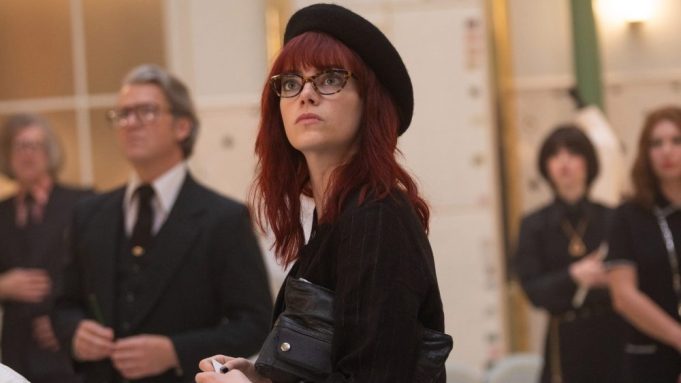 Crombie looked at old photos of abandoned locks that ran along the Thames River in London for her main inspiration for young Estella’s/Cruella’s (Emma Stone) home and lair, where she and her henchmen Joel Fry and Paul Walter Hauser plot out their scams.

In contrast, the Baroness’ warehouse is bright, sharp and monochromatic — an entirely different space for London’s top fashion designer, played by Emma Thompson. She wanted them to be a cultural and generational clash, the past in the Baroness, and the future in Cruella.

Crombie breaks down her process and the ideas behind the sets for the Disney origin story, directed by Craig Gillespie, now in theaters and streaming on Disney Plus (Premier Access).

“That’s what it was called in the script is the lair. You first see that set when they’re children.What I particularly loved about it was that there’s an evolution. Initially, it starts as a little nest in a way. It is playful and wonderful. The idea was that it was not a scary place, it’s a place that you would just love for it to be your hideout.

And there’s ingenuity to the way that those kids adapt the space.

These kids are nailing this, they are on top of how to make their way in London, which then translates to how they as adults get around.

Jasper loves music, and young Estella has her fashion and she’s making the costumes and the outfits.

Even though it’s the 70s, it wasn’t developed the way that we see London. There were a lot of empty locks and buildings were not developed. So we played with these architecturally huge buildings, but they were abandoned.

It was about giving history and character — everything was probably stolen. What are they sitting on? Where did it come from?

You can see the history, like where a wall could have been. In the front room, there’s a beautiful ceiling, and you get a sense of this was a grander environment.

We did a lot of work on paint, getting layers so that it was painting and peeling. She is so graphic, so I wanted it to be soft. So, I played that against Cruella’s graphic look.

The idea was this environment should be a home and a nest.

Craig wanted to make sure that there was a beauty and an openness to it, a magical quality.”

“It is this big workroom where there are all the work tables and all the people making her collection. It was a fun set to build and detail. There was so much detail in the scissors and the pencils and the bits and pieces.

It was this controlled space with monochromatic costumes. It’s super chic. It was about precision. It’s very ordered, in complete contrast to what happens with the lair.”

An Homage to Animation

“Roger’s flat is a complete copy from the animation – all the detail right down to the cup. It’s a total homage.

We found pieces of music that were scattered around, and the certificates – you can see it. It became this thing of finding the identical mugs and identical hats. It became a treasure hunt.”