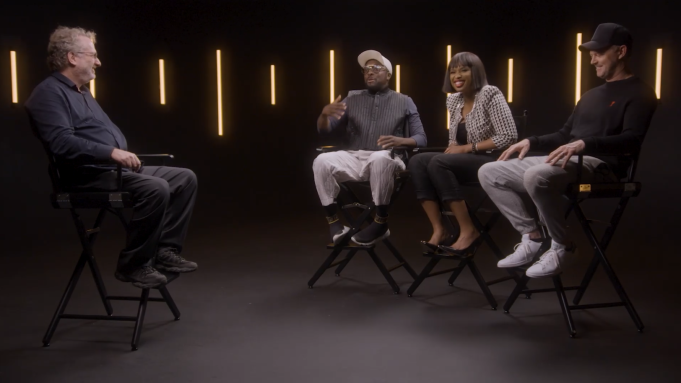 To come up with the closing theme of the Aretha Franklin biopic “Respect,” a dream team was assembled but had to work independently during the pandemic from L.A., Chicago, Nashville and even Idaho. “Here I Am (Singing My Way Home)” is an end-credits capper that has Jennifer Hudson, who plays Franklin, singing a gospel-influenced original song that takes the film to church one last time.

Assisting in this effort were two co-writers, the legendary Carole King and Jamie Hartman, and her producer, Black Eyed Peas leader will.i.am. Hudson, Hartman and will.i.am got together at an L.A. studio earlier this month to take part in Variety’s annual Music for Screens conference to discuss their work on the MGM film.

It would have been easy to throw in one final greatest hit from Franklin over the “Respect” end credits to send audiences home humming. But Hudson, who is also an executive producer, felt a grace note was needed to summarize the musical giant’s journey.

“The film is a tribute to her and her legacy, and after portraying that on film, how do you seal it up in song form and put the bow on top?” she says. “The whole premise of the film was that it wasn’t until the Queen of Soul took ownership of her voice that we got our Queen of Soul.”

“Here I Am” was also a chance for Hudson to use more of her own real voice after the flawless mimicry of the previous two-plus hours. “The most important thing in playing her was to make sure her faith was present and, musically, that the gospel was present, so when it came time to do the tribute song, I thought, why not allow my own gospel roots to come out? It’s a spiritual sentiment — no one can say Miss Franklin didn’t sing her way all the way to her heavenly home — so I thought it would be fitting from her perspective as well as mine,” Hudson says.

So what better gospel great to bring in to co-write than … Carole King? The key tie-in was that King co-wrote Franklin’s career-making “Natural Woman,” which also appears over the end credits.

“It was one of those lightbulb moments,” says Hartman, “of ‘Hang on a minute — Carole’s got to be sitting somewhere during this pandemic, like everybody else.’ What’s the dream? The dream would be to ask Carole if she might be involved.” Despite being basically retired, King was game. Hudson found the exchange of ideas over Zoom surprisingly easy, saying, “She would sing something initially to see where it sits in my voice, and then I’d sing it back to her to fill it out, to make sure the octaves are right.”

And then will.i.am produced the whole track live, with Hudson in Chicago and the band in his L.A. studio simultaneously, despite every indication that couldn’t be done. “There’s a little bit of delay, but we figured out the delay,” he says. “I never would have thought that that could be done remotely. You’d be like, ‘No, this is gospel. We can’t do it that way!’ We all gotta be in the same room.”

Hudson rose to the occasion by using her fierce talent to help solve the delay challenge, will.i.am recalls.

“Her voice conducted the band,” he says. “That two-millisecond delay kind of added a little more drama and anticipation to when they put the punctuation to what she says. It goes to show you that right when you think there’s an obstacle, it turns out it’s not an obstacle. You see that wall and go, ‘Let’s do graffiti on it’ — it turns into a gallery.”