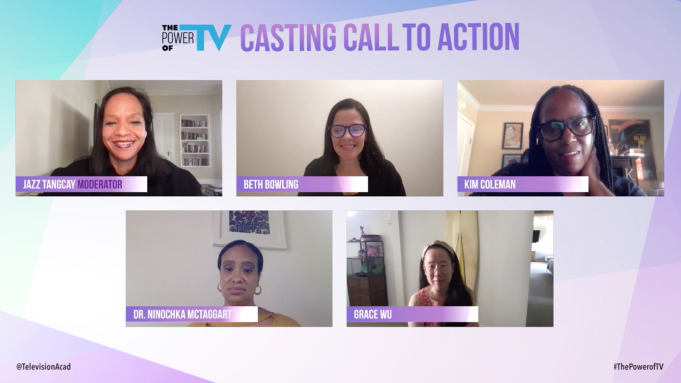 Not a week goes by in Hollywood without some high-profile discussion about diversity, racial equality and inclusion. The very essence of casting as a career lends itself to prioritizing diversity these days believes casting director Kim Coleman.

“Part of my job is to help guide my showrunners and producers and directors, and I try to put as many different types of people and actors in front of them as possible,” Coleman explained during a “Power of TV: Casting Call to Action” panel presented by the Television Academy Foundation and Starz.

“I think awareness is the first step to change. And I think we have that now in our industry. We’re there. Conversations have happened, and they’re happening,” Bowling added. “So, as a casting director, you want to have the conviction to keep — keep that force alive.”

McTaggart spends her time at the Geena Davis Institute looking at issues of representation from a sociological perspective. She shared that she has seen a spike as more people have been approaching the institute wanting not only to collaborate on projects, but also reflect on improving those factors within their own companies and organizations.

“We had a social reckoning of last summer, and commenting on this from a sociological perspective, people are realizing that if they don’t make changes, they’re going to get left behind. It’s the time for accountability,” McTaggart said. “It’s not only quantity of representation. … Numbers are important, and the data, but also the quality of representation.”

To achieve racial equality in casting, creatives must be willing to look for talent in nontraditional places. Wu shared that at one point in time, she even tried to cast a young Aaron McGruder — who later created “The Boondocks” — on “Freaks and Geeks.” She reached out after reading about him in Time Magazine.

“I tracked him down. This is before we had the worldwide web. I don’t know. I must have called information,” she said. “And I said, ‘Hi, I just saw this article about you. … I don’t know if you’ve ever thought about being a performer, but clearly you’re a creative person who I think has an interesting eye.’ And I remember he was just like, ‘Uh, no.’”

Wu wished him luck, and he went on to achieve television success as a writer and artist instead, but Wu likes to tell the story as an example of how casting directors move through life.

“You’re always on the lookout,” she said. “You’re open to being inspired and getting smitten with people.”