Fashion designer Halston’s tie-dye collection first dropped in the late 1960s. Silk chiffon was draped over the body and revolutionized fashion as stylish New Yorkers and celebrities such as Anjelica Huston donned the iconic couturier’s caftans.

That collection is one of the looks that’s faithfully re-created by costume designer Jeriana San Juan (“The Plot Against America,” “The Get Down”) in the Netflix miniseries written by Ryan Murphy and starring Ewan McGregor in the title role.

“Halston,” which debuts May 14, traces the life of Roy Halston Frowick, the Bergdorf Goodman milliner who got his start as a Chicago hatmaker and shot to fame in the ’60s, becoming mononymic after designing First Lady Jacqueline Kennedy’s pillbox hat for her husband’s presidential inauguration in 1961.

Over the series’ five episodes, San Juan’s wardrobes focus on several eras as events follow Halston from the late 1950s to the 1990s. Settings include a re-creation of the 1973 “Battle of Versailles” faceoff in Paris that also featured the work of Pierre Cardin, Yves Saint Laurent, Oscar de la Renta and Anne Klein. Another highlight: Halston’s reign over Manhattan’s Studio 54 nightclub, where fashionistas disco-danced in his slinky designs while he hung out with the likes of Liza Minnelli (played by Krysta Rodriguez), jewelry designer Elsa Peretti (Rebecca Dayan) and director Joel Schumacher (Rory Culkin).

San Juan left no stone unturned in her research when it came to re-creating the famous moments. “I had to find a specific voice for each of those periods,” she explains. “That meant looking at the iconic photographers, the models, the textile makers, the trends that drove each era.”

“We knew in the first episode that we wanted to show his evolution coming into his own as a fashion designer instead of a milliner,” says San Juan, who worked closely with the show’s writers and director Daniel Minahan to decide which of Halston’s works would demonstrate his “strong, independent and creative voice.” The tie-dye garments fit that notion perfectly.

“We’re coming out of the ’60s, and when that collection premiered, it was around 1968. I took some creative license in curating what pieces we were going to show,” she says.

Halston’s tie-dye line was created with his Upper East Side customer in mind, someone with a sophisticated mindset. “I used my imagination to fill out some of the collection and make it feel revolutionary,” says San Juan. “He had this way of interpreting tie-dye that wasn’t your hippie style. He used batik and he used tie-dye to highlight a woman’s body and her bone structure. His colors were sophisticated.”

San Juan also collaborated with production designer Mark Ricker (“Ma Rainey’s Black Bottom”) to get a sense of the room where the fashion show for the tie-dye collection was to be held. “I said, ‘Let’s put all of the people present at his show in contrasting color palettes such as busy patterns from the ’60s so you can tell how dated their clothes look,’ and that made the contrasting collection pop,” says San Juan. The idea was to show how his sleek designs remain timeless even 50 years later. 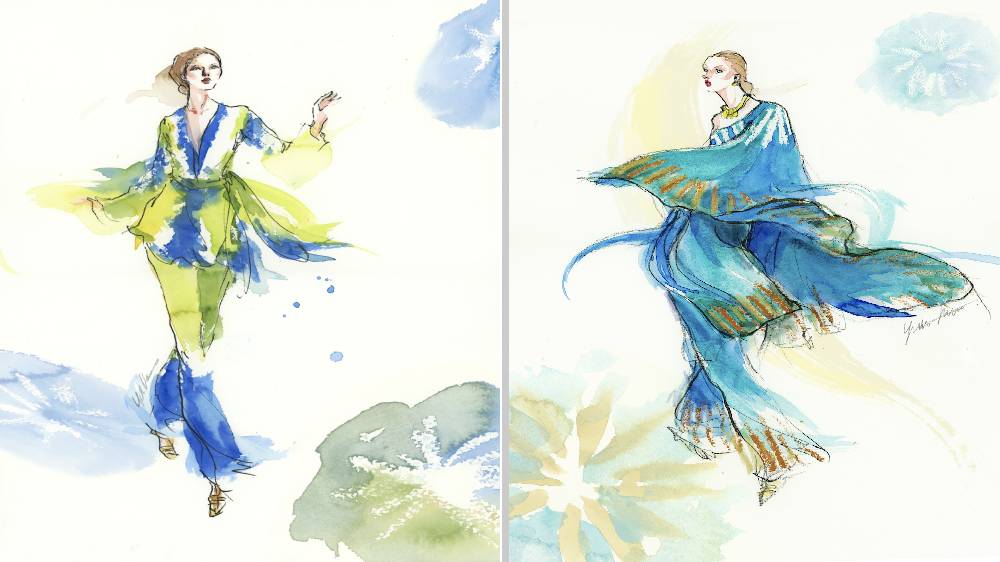 Since the collection was well documented, San Juan consulted back issues of Vogue and paid a visit to the Metropolitan Museum of Art, which has a Halston caftan in its permanent collection.

The costumer built 10 pieces for the tie-dye scenes, using her research, some re-creations and some original designs — as well as one irreplaceable artifact. “There is one real [Halston] caftan in the mix,” she reveals, on loan from a vintage collector. “It’s a very special piece.”

Discovering Halston’s private moments drove San Juan’s creativity. “It was about finding his headspace at that moment,” she says, explaining how he approached his career, whether on the red carpet at Studio 54 or as an artist in the workroom.

“He wears his artistry with such intimacy, and it’s such a part of his vernacular and his DNA, that he doesn’t go home and put on a comfy T-shirt or pajamas. He’s not that person,” she says. “Maybe he’s wearing a caftan, but it’s made from the most beautiful hammered silk that you’ve ever laid eyes on. He lives and breathes Halston.”

The series also explores Halston’s friendship with Minnelli, who was most known in her early years as simply being Judy Garland’s daughter. As she tried to break free from the shadow of her mother, she became a muse for the designer, who selected her clothes and helped to develop her unique style. In turn, she helped put his name on the map. “It was almost how a stylist works today,” San Juan says. “He created a brand around her and her image, celebrating her strengths as a dancer and her femininity. He created Liza. He revolutionized fashion.”