Ruth E. Carter Makes History With a Star on the Hollywood Walk of Fame 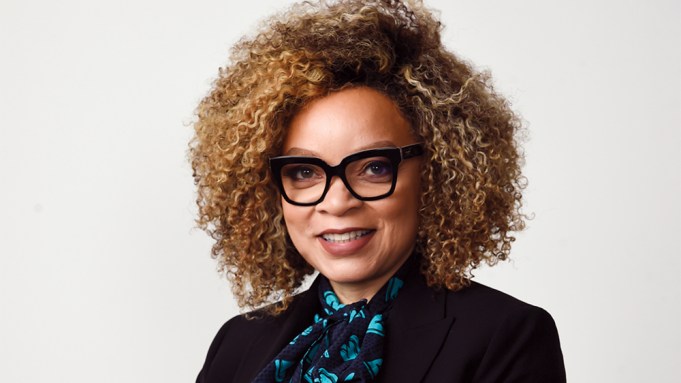 You know her name. You know her work. That’s because Ruth E. Carter has been working in the industry for over four decades. Her ability to
create costumes and fully realize characters has made her one of the most sought-after costume designers.

“The first thing I wanted to see when I moved to Los Angeles in 1986 was Hollywood Boulevard and the Walk of Fame,” Carter fondly recalls. “I think those stars are synonymous with Hollywood past and present.” Carter’s star will be embedded into Hollywood history alongside Cicely Tyson, Quincy Jones, Judy Garland and Olivia de Havilland.

“It’s like a Monopoly game, you walk from star to star to star, and you read the names and you’re curious about them. Some of them you recognize, and some of them you don’t,” she says. She is hopeful her star will inspire other girls; little girls who walk and think about characters, that they too will know that an open door waits for her. “Tourists and hopefuls in the industry all walk the boulevard and feel the same way about it, ‘Maybe someday this will be me,’” says Carter.

Her Oscar for “Black Panther” shattered glass ceilings and broke the mold for superhero costumes as she created technologically advanced looks that were representative of 12 different African tribes for the fictional world of Wakanda.

The film cemented her place as a trailblazer in the craft.

Costume designer Charlese Antoinette Jones, who worked on “Judas and the Black Messiah,” notes Carter’s historic Oscar in opened doors for her. “She opened a lot of doors for us. I’ve seen more people requesting Black designers this year — due to her win, but also partially due to the social climate. Even me being considered [for awards] right now is due to her winning and laying this groundwork,” Antoinette Jones says.

Throughout her career, Carter has worked on more than 60 films. Her move West saw her start as a volunteer in the dye shop at Western Costume, Hollywood’s go-to costume and prop house. In between jobs, she worked at the Santa Fe Opera.

At that time, the Massachusetts native was one of the few African Americans in the field; “One Night in Miami’s” Francine Jamison-Tucker being the other.

An encounter with Spike Lee, who was also in the early stages of his career, led to her being hired to work on his 1988 film, “School Daze.” It would be the beginning of a close collaboration that continues to this day.

For “School Daze,” Carter used contrasting colors such as reds and silvers and blacks for the sorority and fraternity world that centered around Black college life. Her use of colors would be her signature aesthetic over the years.

Back then, in the pre-digital, pre-social media world, there wasn’t an easy way for a below-the-line craftsperson to promote themself. But her talent meant that she was able to make a name for herself.

Carter continued working with Lee on his projects including “Do the Right Thing,” “Mo Better Blues,” “Jungle Fever” and 1992’s “Malcolm X,” for which she received her first Oscar nomination for costume design.

“I was protected. I came up with Spike, Robert Townsend and Keenan Ivory Wayans. They were trying to do things their way, and it was independent film,” Carter says of her path. Those directors became her landing pad in Hollywood.

“They didn’t mind me doing things my way, so it helped ease the pain of coming into this Hollywood framework. It wasn’t a studio introduction, [but] independent film, which made it easier.”

The Oscar nomination did make Hollywood take notice of her and led to “Cobb.” The 1994 film was directed by Ron Shelton and starred Tommy Lee Jones as the racist baseball player. Carter enjoyed her time on the film.

“It was a nice group of people and I was happy to do more period work, but it was tough,” she admits. “It was tough walking into a Hollywood framework where people weren’t used to seeing people like me in the lead position.

“We’ve been there cleaning and shining the shoes, but we haven’t been there as the department head, making the decision as a creative artist.”

Carter used her voice and kept using it because she felt she would have been railroaded otherwise. “I would have acquiesced and I would not have had the confidence that I designed this myself.”

She learned to command her voice and make sure she was respected because she noted the whispers of “How did you get here?” “Are you good enough?” in the air.

While she had a strong role model in her mother, Carter credits Lee as being instrumental in opening up a great way of looking at Hollywood. “‘You walk through Hollywood with your own voice. You walk through there with your portfolio,’ he would say. He gave us that charge.”

She adds of Lee’s visionary filmmaking, “We were ahead of our time. We were looking towards the future.”

That meant lending a hand to another person of color and another young person. “We wanted to be mentors. We opened the door to internships; if you wanted to learn about costume design and you were accepted, you were assigned to my department.”

In 1993, Carter’s brother, who was was in software testing, gave her an entire computer system. She started using the technology for her designs, including “What’s Love Got to Do With It,” the Tina Turner biopic.

She re-created Tina Turner’s most iconic looks from the ’70s and ’80s, including the famous gold metallic fringe dress and high-waisted miniskirts. Her brother showed her how to make screengrabs of the singer and zoom in so she could get closeups, enough to count the layers of beading.

Carter received her next Academy Award nom for her work on Steven Spielberg’s “Amistad” (1997). Her body of work continued to build and shape the voice of Afro-future design, masterful wardrobe creations, replicating the Black experience through costume design.

“Selma” and “Malcolm X” were among her credits in which Carter brought to life the Rev. Dr. Martin Luther King Jr. and Malcolm X through her design work.

Her process involves surrounding herself with material inspiration.

“The walls are covered with those images. It could be indigenous from Africa that inspires me,” she says.

It also helps people who work with her. “They’re inspired by what they see. They get a sense of the film and the feeling of the film. I generally need to keep seeing the art in front of my face all the time just to remind me of what my intention is.”

As Carter continues to break barriers, she continues to add other firsts. “We’ve got to stop saying ‘you’re the first.’ We’ve got to see what the second, the third and the 10th are going to do,” she says. “We’re doing what we need to do.”

Carter points to social media for up-and-comers to curate content. “We can reinvent your own thing. You can curate it,” Carter advises.

Her passion for her culture and community is seen in the decades of her mastery. With her diverse and extensive body of work, Carter has decades of iconic costumes under her belt, she says she would love to do “a ‘Moulin Rouge’ [type film] that’s set in the Harlem Renaissance.”

With her love for theater, she also wants to “do a spectacle of Black culture with performances. Something gorgeous, and tell a story about us that lived during that time.”

A speech from 2019 summed up her philosophy: “My career is built with passion to tell stories that allow us to know ourselves better.”