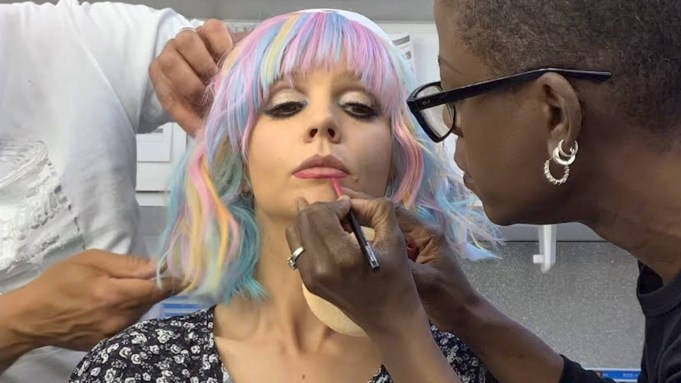 As soon as Makeup Head Angie Wells received Emerald Fennell’s script for “Promising Young Woman,” she had notes to make. She noticed the different personas that Carey Mulligan’s Cassie goes through, especially when “she’s doing her hits; it wasn’t soft and pretty.”

Fennell’s film follows Cassie, who by day works in a coffee shop, and by night turns into avenging angel as she seeks revenge on the men who have caused her best friend unimaginable pain.

Wells broke down her process behind crafting the looks for Cassie, and reveals she gave the looks nicknames. “When she’s in the bar with a mini dress and her hair is pulled up into a ponytail, that’s the ‘Homemade Kardashian’ look.” She adds, “I wanted to make it sexual and inviting, but make it look like she did it herself.”

The last thing Wells wanted to do was create a perfectly put-together look, as it would take the viewer out of the moment. She purposely did not blend the contour, outlined the lips and used a lot of gloss. Says Wells, “This is someone who watched Instagram and YouTube videos and practiced in the mirror.”

Later in the film, as Cassie’s character is descending into a darker realm and is at a breaking point, she sits in front of a mirror and, riffing off of the Joker, smears her red lipstick across her face.

“I knew I wanted a dark red lip for that, as I knew her persona was this grungy type character. I didn’t want anything black, so I picked out a deep-blue red,” Wells explains.

“It’s edgy and frightening,” Wells says of the nurse look that comes in the third act of the film. Her inspiration? A blow-up doll. “Blow-up dolls have a wide-eye and a big mouth look, so I played to that.”

Watch the video above as Wells reveals more about her inspiration and process behind the look of “Promising Young Woman.”