Costume designers for “Bridgerton,” “RuPaul’s Drag Race” and “Bridgerton explain the process behind their showstopping creations.

“Bridgerton”
Ellen Mirojnick was not interested in creating a bonnet period show for “Bridgerton.” Thankfully, showrunner Chris Van Dusen was
in agreement.

“Chris was not interested in recreating a historical piece, but rather [using] history to exemplify the different levels of society and what you could and couldn’t do. It was not a history lesson,” she says.

Mirojnick took further liberty with her designs for the Shondaland-produced Netflix drama by mixing silks, which were common during the
Regency era, with modern fabrics to build her dresses. The key to the “Bridgerton” wardrobe was being true to the foundation of the period but abstracting it.

“We took the circular part of the bonnet and made it into a piece that you could wear in your hair and decorated it,” she says. “We used
modern applications to create a world that looked fresh and maybe one you hadn’t quite seen before.” Mirojnick adopted a “stack and
stitch” method for building these costumes. “It means [adding] layers and layers,” she says.

After finding a dress in magenta silk that she knew wasn’t going to work, Mirojnick layered it with tulle from her fabric bin. It “changed the color beautifully. It was in that moment that it all became clear.”

She also developed specific color palettes for each family. The Bridgerton blue, which Mirojnick compares to a bouquet of fresh spring flowers, “was the perfect hue to use in that family [because] the tone felt elegant, adult, sophisticated and simple,” she says.

As episodes progressed and Daphne’s (Phoebe Dynevor) relationship to her husband, Duke Simon Basset (Regé-Jean
Page), evolved, her color palette got darker, though. For the Trowbridge ball scenes, Mirojnick wanted to be a little more “risqué
[with] her. We added black to a soft pink, which reminded me of Chanel. Those flowers were laser cut and [we] added black tulle to her neckline,” she says.

The Featherington family, by contrast, were brighter and bolder in their style; Mirojnick likens them to the Versace family.
“The girls were in acidic colors, so we played with the citruses of it all,” she says, adding that she would layer yellow over orange and turquoise over red. “You get a dimension by doing that and it wouldn’t look like stick figures.” 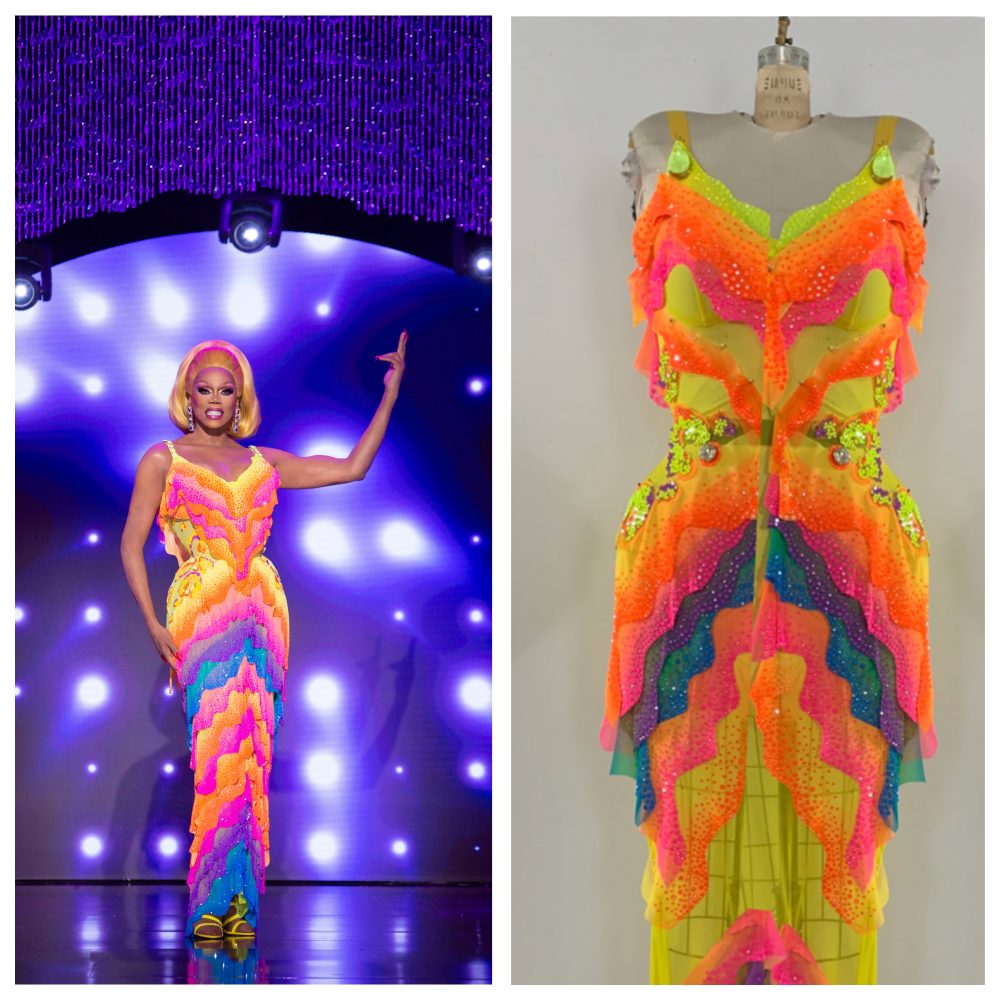 Zaldy found these crystals in the fall of 2019 and then conceived the idea for the gown almost a year later, in August. “As soon as I saw them I thought, ‘These have to be for the finale if it ever happens,’” he says. “I knew when I thought about the finale, it needed to be over the top, colorful, sexy and sparkly so she stood out above everyone.”

But at that time, he was still uncertain as to whether the final episode would be done over Zoom or as a live event. (It eventually took place in-person at the Theatre at the Ace Hotel in Downtown Los Angeles.) So, he sent photos to RuPaul, who, he says, was instantly on board for the look. Each layer on the dress was made from mesh and handpainted in an ombre color, and the stones were individually applied. Zaldy wanted the leopard print waistline as close to the host’s body as possible. “Ru has the tiniest waist, so we did that tight waist, and it was important to have movement everywhere else,” he says. Of the look overall, Zaldy says, “It was as blinding, sparkly and as spectacular as I could have imagined.”

Marina Toybina’s challenge for Season 5 of “The Masked Singer” was that her go-to places for fabrics were still closed due to the COVID-19 pandemic. This was not a complete shock, as she went through the same thing with the fourth season, but it still required a little extra research and creativity.

In addition to scouring the materials that she and the studio already had, “we dove deep into using small businesses, trying to help out stores that were open online,” she says.

Toybina’s main goal was to build costumes that would serve as an escape from the pandemic as audiences tuned in from home.

The Snail costume was one of the first she worked on for the season. The majority of that outfit was built from foam. “We wanted to create a cinematic-inspired creature and we had to make it mobile so someone could sit down inside it and sing without having to worry about the weight of the costume,” she explains.

With the Crab, she created a “fantasy mixed with a superhero element” because she wanted to move away from what people would expect from a crustacean. “You still see the essence of a crab — the shell and legs are there — but at the same time we were so precise with the sewing and using the right fabrication to give it a masculine approach, while still being able to add the iridescent touch.”

As the fifth season of a show known for being big and bold, most of the looks were “enhanced and larger” this year, Toybina says. That certainly was true for the Phoenix, which she wanted to poignantly represent as rising from ashes. The skirt alone required more than 100 yards of fabric and took four weeks to build. “ There’s hope and power behind what this creature represents, and I wanted to incorporate that,” she says.