Leslie Odom Jr. and Variety’s Artisans Award Honorees Offer Advice on Getting Into the Craft 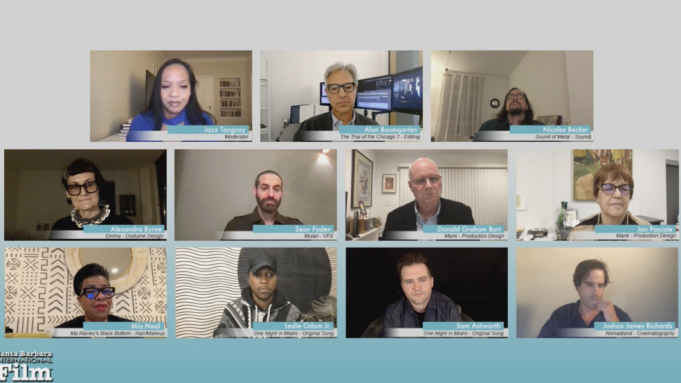 Double Oscar nominee Leslie Odom Jr. was among the craftsmen and craftswomen at Variety‘s Artisans Awards offering advice on how to get into the field they work in. Odom Jr. said, “Starting with the education is key, and starting in the theater is key for me.”

The “One Night in Miami” actor, songwriter and theater performer was honored at the seventh annual Variety Artisans Awards alongside co-writer Sam Ashworth for their original song contender “Speak Now.”

SBIFF Executive Director Roger Durling kicked off the evening by introducing the honorees. He said, “We celebrate this evening, below-the-line talent at the heart of filmmaking,” told viewers who watched the event from the festival’s online streaming platform. “Below-the-line. I have never quite liked that term.” Durling added, “It’s a term derived from the top sheet of a film budget for motion pictures,” he added. “And the ‘line’ in below-the-line refers to the separation of production cost between script and story writers, producers, directors, actors and casting above-the-line. What I love about this evening is that it erases that idea of anything being below.”

Makeup and Hairstyling Guild Award winner Mia Neal (“Ma Rainey’s Black Bottom”) offered education as the key to getting into her field. Neal, a graduate of The Juilliard School’s internship program for wigs and makeup kicked, off the panel conversation. “Start with the education,” she offered. She called the program “life-changing” to her career path.

Neal, also an Oscar nominee, suggested to budding hairstylists to get ahead by starting in opera. She said, “The budget is usually a lot less than itself so you will learn to get very creative, very limited resources.”

Songwriter, producer and singer Ashworth said anyone who wanted to get into songwriting and singing needed to have a passion because the field was “incredibly hard.” He encouraged budding songwriters to build mental endurance. “The passion has to be there and the conviction has to be there. You can’t stop, you’ve got to stick with it.”

“Nomadland” cinematographer Joshua James Richards, on track for an awards season sweep for his work on Chloe Zhao’s visual masterpiece, echoed Ashworth’s sentiments of loving what you do and having a passion for the craft. Richards, who has been a cinematographer for 11 years, added “find a safe space to fail. Get your hands dirty and get your hands on a camera.”

For aspiring costume designers, Alexandra Byrne, who was joining the panel from the United Kingdom, agreed with Neal and Odom Jr. that theater was a great place to start any career because it offered a chance to learn about the art of storytelling and design. “You learn to be pragmatic, and I think that’s a huge part of the design.” She added passion was the key and so was observing the world around you.

“Know your world,” Byrne said. “Know what you’re looking at because I think with costume, even if it’s a period film, you are always seeing it through the context of today. To understand today and what that means and how to bring that relevance in to create.”

Watch the video in full above.